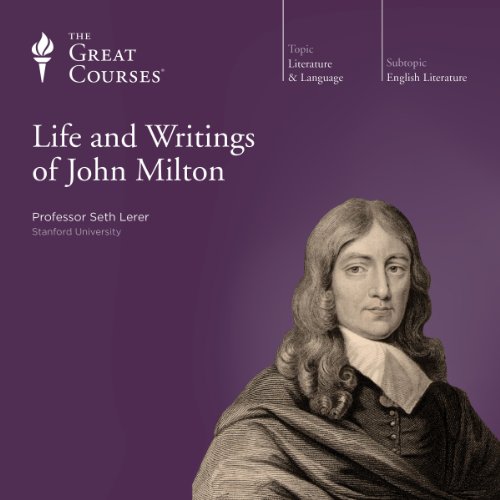 The Life and Writings of John Milton

There is no disputing that John Milton is considered one of the supreme writers in the history of English letters. Yet, for a number of reasons, many modern readers are unaware of the pleasures of his poetry and prose. These 12 lectures examine Milton's life and work in order to understand the richness and depth of his poetry, its ways of representing 17th-century English life and culture, and its impact on later writers and on English literary history as a whole. You'll learn about Milton's works in all their fullness, whether or not you've read them in the past. You'll get both an introduction to Milton's achievements and a means by which you can cultivate your own thoughts and opinions about works including Paradise Lost and Areopagitica. While Paradise Lost alone could easily be the subject of an entire lecture series, Professor Lerer chooses not to restrict himself to this unique masterwork, but rather to make it manifest in the context of its maker's life and career, and to give you a foundation on which to build your future enjoyment of Milton. Because of this, you'll get a chance to explore Milton's early poetry, "Lycidas," his various political works, Paradise Regained, Samson Agonistes, and more. Professor Lerer describes these lectures as "an invitation to the modern reader to find ways of enjoying, appreciating, valuing, and even struggling through a poetry that says as much about human nature and political life now as it did over three centuries ago." And in learning to feel the living pulse of Milton's world, you'll join generations of readers and authors, including William Wordsworth, T.S. Eliot, and Mary Shelley, who have taken inspiration from his genius.

Would you listen to The Life and Writings of John Milton again? Why?

Yes after listening or reading more of Milton's works.

What was one of the most memorable moments of The Life and Writings of John Milton?

His review of Paradise Lost

If you never had a college course on Milton or Paradise Lost then this course will help you understand both. As the title suggests this course is not limited to Paradise Lost. I now have interest in reading other works by Milton. I do wish the course was longer so it could cover more details of Milton's works.

Chapters need to be given titles!

Would you try another book from The Great Courses and/or Professor Seth Lerer?

It's really difficult to find which lecture you want to listen to when all it does is number the chapters.

What aspect of Professor Seth Lerer’s performance would you have changed?

nothing he is fine.

A great overview of John Milton

When I was in school I primarily took courses in science. Now that I am retired I thought I might look into areas I neglected in my life such as poetry. I chose this Great Course on The Life and Writings of John Milton as a way to obtain a lot of concise information so I would have a good understanding of Milton. Professor Seth Lerer is a professor at Comparative Literature at Stanford.

John Milton (1608-1674) is considered one of the great writers in the history of English literature. This lecture series exams Milton’s life and his poems. Lerer goes a bit into 17th century English life and culture to show its impact on Milton’s writings. Milton wrote in a time of religious flux and political upheaval. Lerer points out that Milton wrote in English, Latin, Greek and Italian. Milton achieved international renown within his lifetime and is famous for his poem “Areopagitica” (1644). Lerer points out that it was written in condemnation of pre-publication censorship. It is considered one of the most impassioned defense of free speech and freedom of the Press. Lerer covered in-depth the epic poem “Paradise Lost” (1667)

In listening to Lerer discuss and read parts of Milton’s poems, I thought the ideal person to read Milton’s poems would be Richard Burton. This is an ideal introduction to John Milton in an easy to listen to lecture format.

Especially loved the last lecture comparing Milton worth scifi like Frankenstein! Well worth the price.