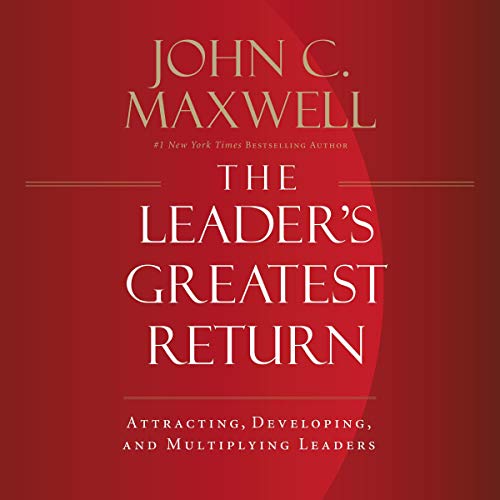 What is the greatest return on a leader’s time?

After leaders have invested in their own leadership growth, what is the best way to accomplish their vision and grow their organizations? Develop leaders! The more leaders an organization has and the better equipped they are to lead, the more successful the organization and all of its leaders.

Number one New York Times best-selling author John C. Maxwell is often identified as the most influential leadership expert in the world. In the last 25 years, he has grown from equipping a handful of leaders in one organization to developing millions of business, government, and nonprofit leaders in every country around the world.

In The Leader’s Greatest Return, Maxwell shares the most important lessons he’s learned about the leadership development process over the last quarter century. He instructs listeners in how to:

This is where leaders really experience the compounding value of developing leaders and go to the highest levels of leadership themselves.

Anyone who wants to take the next step in their leadership, build their organization or team today, and create their legacy for tomorrow needs to listen to The Leader’s Greatest Return.

looking to listen again and again. there is so much to receive from every word.

Excellent book as usual by John I liked the Compounding Return concept New learning from John every time I listen to his book But better for John to avoid talking about his personal faith in his books. We love his wisdom as we see it from our own faith. Thanks a lot to the great leader John C. Maxwell

seemed as he talked a lot about himself in the book but his voice and demeanor are sweet. i have read several so it was a little repetitive, but still had great points amd take aways.

Excellent book I am going to re-read it many times. The leadership skills presented are rare and valuable. I can't wait to apply this in my personal business.

John C Maxwell really his his all to encourage you become a river-like leader. Loved it and recommend. So glad I’ve had the chance to listen to the audiobook that contains some extra word of encouragement. Thanks John.

Just when you think John Maxwell cannot get any more innovative, intimate, and insightful he does it again. This is an absolute must read!

John Maxwell is so inspiring and amazing. He really knows how to bring out the best in the reader through his stories.

By far the best book Pappa has written to date!!! His books have consistently impacted my life. Th is book is an absolute result of all that compounding interest!

I have read many John Maxwell books but listening to this one, hearing his additions, was so amazing! I felt like I learned more, and thought more about the content! Loved loved loved it