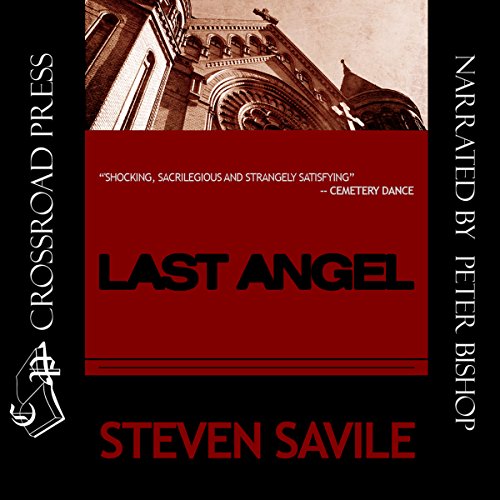 Gabriel Rush is a broken man.

Once a dedicated cop and family man, he is now little more than one of the walking dead. Busted out of the ranks of New York's finest, he's been reduced to P. I. work - of the sleazy variety - until he takes a photograph of a sad-faced woman in a café which, when he develops it, reveals on odd pattern on her cheek. The mark is the signature mutilation of the Trinity Killer, a brutal murderer who has New York living in fear.

As the mystery deepens, he discovers that the killer's fate is bound inextricably to his own past and future.

Trying desperately to warn the woman, Rush finds himself haunted by visions and fighting to save the woman he loves, his friends, and-when the killer's identity is finally revealed-his own sanity.

Previously published in the United States in 2001 as The Secret Life of Colours, The Last Angel is a unique fusion of crime, horror and angelkind that is quite unlike anything you have ever read.

"Steven Savile writes with a lyricism and versatility that marks him immediately as a writer to be treasured on your shelf. Savile has, with his Native American detective Gabriel Rush, offered up a character scarred with tragedy and frailties, the sort of man we can admire and pity in the same breath. Perhaps the second most important character in the novel is New York City herself. David Fincher would be the ideal director to take this novel to the silver screen - the mix of sepias and grime contrasted surreally with the occasional colour lens of the killer's point of view, lend the novel a unique backdrop, utterly different from the New York you might have visited with other writers, yet identifiable nonetheless." (Caio UK)
"Shocking, sacrilegious and strangely satisfying," ( Cemetery Dance)
"You can't read The Last Angel in a faded state of mind; Savile wants you to experience more. And experience you will every tint and shade you never noticed before. Some you never wanted to notice. Enjoy the pleasure of Savile's prose and the amazing breadth of his ideas. However you read it, you're never going to forget Trinity." ( SF Site)