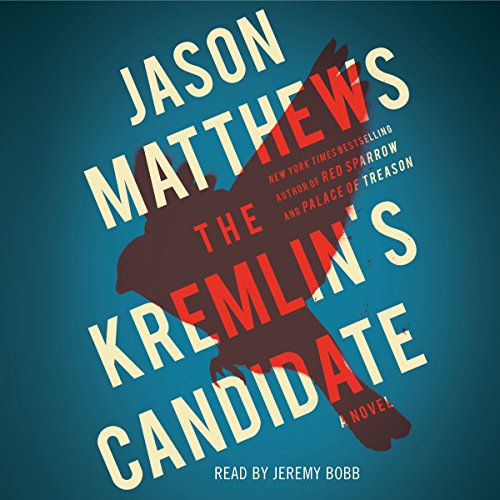 Russian counterintelligence chief Colonel Dominika Egorova has been a recruited asset of the CIA, stealing Kremlin secrets for her CIA handler, Nate Nash, for over seven years. In the dazzling finale to the Red Sparrow Trilogy - which will be published right before the release of Red Sparrow, a major motion picture starring Jennifer Lawrence and Joel Edgerton - their forbidden and tumultuous love affair continues, mortally dangerous for them both but irresistible.

In Washington, a newly installed US administration is selecting its cabinet members. Dominika hears a whisper of a closely held Kremlin operation to place a mole inside a high intelligence position. But it's worse than that: One of the three candidates under consideration has been a paid Russian spy for a decade, selling precious US secrets. If the Kremlin's candidate for the position is confirmed, the Russians will have access to all the names of assets spying for CIA in Moscow, including Dominika's. But which of the three individuals is the mole?

Dominika's report triggers a desperate mole hunt before she's exposed and arrested. Resisting all suggestions to defect and save herself, Dominika recklessly immerses herself in the palace intrigues of the Kremlin, searching for the mole's name, and stealing as many of President Putin's secrets for her CIA handlers before her time runs out - even as Putin's dangerous interest in her grows. The treasure trove of her intelligence reporting sends Nate Nash and colleagues on desperate missions to Sevastopol, Istanbul, Khartoum, and Hong Kong.

With a plot ripped from tomorrow's headlines, The Kremlin's Candidate is a riveting story if you've never listened to Jason Matthews and a thrilling conclusion to the trilogy begun with Red Sparrow and Palace of Treason, which The New York Times Book Review called "a primer in 21st-century spying...terrifically good".

Loved the first 2. Wish I didn’t read this.

Some things you cannot unhear....

It was much harder to get into this book than the first 2. I had to listen to some parts... many parts... more than once, when my attention drifted again and again.... but a little over halfway through I was once again riveted. Until the ending.

Spoilers ahead, so if you’re determined to listen to this, don’t read on. But if you don’t want a bad taste in your mouth after hours of time devoted to listening, plunge ahead. I wish I had read some spoilers and spared myself...

I get that the author was really a spy, and I’m sure he lost people he was close to, but if I wanted a work of non-fiction that’s what I would have purchased.

I just sat when I finished, aghast. How I wish I had not wasted my time and interest in this book. I will trade it in for something that I hope leaves me feeling less ill.

Worse yet, the plot device needed to kill the last character who dies off is so patently false, so manipulated to give this ridiculous ending, it made no sense. I had to listen to the set up 4 or 5 times to let it sink in. Completely unnecessary.

Book 1 was awesome. Book 2 was pretty good. Book 3 was boring with a terrible ending. Wish I could get the 16 hours back.

Characters are becoming more and more insufferable and the author's bias harder and harder to ignore. Good guys from the CIA find enough time between overthrowing democratically elected governments and manipulating public opinion of US citizens to be saving the world. Everyone is corrupt except of course for the CIA, the only thing keeping CIA from perfection are the gosh darned bureaucrats and politicians. How much of suspension of disbelief can you really expect from me?

Best of the 3 but hated the end

I read (listened to) all 3 in a row. The first I loved, the second... I liked but was worried it was slipping towards a drug store romance novel. The 3rd, was awesome, lots of intrigue and plot twists, but... the end was dissapointing. Still very much worth the listen and excellent narration!!

What disappointed you about The Kremlin's Candidate?

What a grand disappointment. I expected much better. I think the editors are as much at fault as the author. I feel like this was written just to finish the trilogy. What happened?Jason Mathews' Kremlin Candidate is by far the weakest of the three books. Red Sparrow is absolutely superb. Palace of Treason is very good. The first two books created characters that are multifaceted as we would expect in the real world. The characters have complicated motivations and their actions are true within the world created by Mr. Mathews.Sadly, in Kremlin Candidate, Mr. Mathews decided to just end this world. This feels like Mr. Mathews is under contract to write a third book, but is tired and angry so he takes it out on his characters and through them the listener or reader. And the editors did not care enough.Some characters actions are not consistent with their psyche.One character is sent to a global hot spot and dies in a few pages with no foundation. This feels like Mr. Mathews just wanted to get rid of him. Another character is suddenly fired from the CIA in a few pages and goes away. There is not enough foundation for these two characters to exit. These two episodes as well as others just feel untrue. They seem to come out of no where.There is one part where a cut out gets away in the water. I could see this coming because this was already done in a previous book.At the end of this book we discover that Mr. Mathews situations and character actions are created with only one purpose in mind; to end this story.This final effort is totally unsatisfying. I think that this book might not have been published at all without Red Sparrow.Mr. Mathews, what happened anyway?

What was most disappointing about Jason Matthews’s story?

This final effort feel untrue within the world and characters. It feels like the only point of this book was to end the trilogy.

Have you listened to any of Jeremy Bobb’s other performances before? How does this one compare?

Mr. Bobb's performance was great. I do not think he had as much to work with in this final effort.

If you could play editor, what scene or scenes would you have cut from The Kremlin's Candidate?

I would cut the scene where Gable is killed. This just does not feel true.The scene where Susan gets away is trite. This also happened in Palace of Treason. Once per trilogy is enough. The scene at the end where the CIA agent is fired is so quick that it feels like the author just wanted to end this.

Kremlin Candidate does not do Mr. Mathews previous two books justice. I wold like to know what happened.

This story did not flow well at all. It was a poorly stitched collection of action scenes and loveless sex scenes with very little plot or interesting tradecraft. Everything was rushed. Almost everyone is killed or fired. The story was rushed with countless loose ends.

This was an incredible story. Both current and thought provoking. The best of this series I believe. Would make a block buster movie. How soon do we get the next book? :)


the ending was depressing. soured the experience. I loved the whole series till the end. I get why it is the way it is. It just makes me feel like I wasted my time on 3 books for a horrible payoff.

If you like the characters and story, stop at book 2. I wish I had! First part is fine, but the author seems to have been in a rush to finish this book. Ending is rushed with many sudden changes and actions that strained credulity. Neither believable nor satisfying.

If you are invested in the characters of the story....


If you are invested in the characters do yourself a favor, and don’t listen to book 3. The ending of this story was terrible and almost seemed like the writer was just ready to be done with this trilogy.