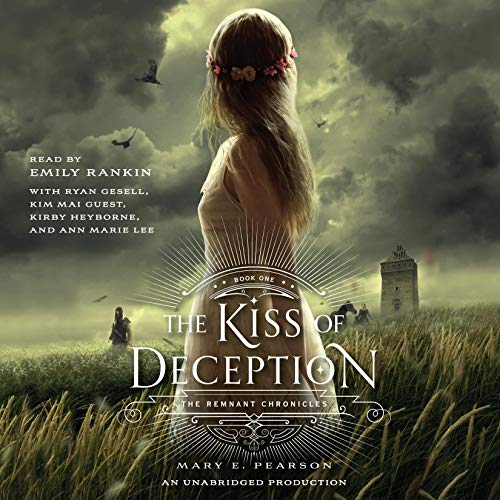 The Kiss of Deception

In a society steeped in tradition, Princess Lia's life follows a preordained course. As First Daughter, she is expected to have the revered gift of sight - but she doesn't - and she knows her parents are perpetrating a sham when they arrange her marriage to secure an alliance with a neighboring kingdom - to a prince she has never met.

On the morning of her wedding, Lia flees to a distant village. She settles into a new life, hopeful when two mysterious and handsome strangers arrive - and unaware that one is the jilted prince and the other an assassin sent to kill her. Deception abounds, and Lia finds herself on the brink of unlocking perilous secrets - even as she finds herself falling in love. The Kiss of Deceptionis the first audiobook in Mary E. Pearson's Remnant Chronicles

I'm not usually one to enjoy multiple readers but this time it was well done.
The story is good and leaves us wanting more.
If you like romance and adventure in an imaginary magical land, you won't be disappointed.

Oh, the love that I have for this book.

I put off reading this book for ages for two reasons, 1) hype and b) its Fantasy. If there is one thing to know about me, is that Fantasy and I just don’t always get along. That isn’t to say I don’t like, or even love the genre; I do. But we have a weird relationship, one that I am frequently taking a break from.

Yet, when I saw it available on Audible I decided to take the plunge. And I am so glad I did.

This book is brilliant. It has every element that I love and look forward to when heading into a Fantasy novel. Strong heroine. Beautifully crafted world building; with writing so descriptive I can picture myself right along side the main characters(s). A history was isn’t bumped and a love interest(s) worth swooning over. Even my boys’ listened to the book (quietly) and they would often beg me to go back or explain in detail what they missed.

Told mainly from Lia’s POV, we follow her as she flees to a remote village on her wedding day. She is remarkably crafty in her last-minute escape, and her planning into it made me admire her more. I loved her strength, her witty and snarky attitude. Although fleeing could potentially put her kingdom at war – and one might think this a selfish act – I admire her brazen act and her dreams for more. She is far from a weak, prissy princess and it was so refreshing to have a bold yet likable character that goes after what she wants.

The love interest(s) twist was quite interesting and entertaining. We have The Prince – the one Lia was slated to marry – who admires Lia’s bravery for leaving yet wants answers. And then we have the assassin – who is sent from his own kingdom of Venda (I THINK that is how you spell it, I don’t even know) sent to kill Lia to stop an alliance between the surrounding kingdoms.

Aaaaand, then you have Kaden and Rafe. But who is who!?

Quite honestly, I figured it out pretty quick – but that didn’t mean I wasn’t questioning this until the reveal. (The kids were shocked, haha) Both Kaden and Rafe are very complex characters, who both genuinely care for Lia. I don’t find this to be a “typical” love triangle. It has the feel of one, because you don’t know who is who. And while Lia is attracted to both and cares for both, she only loves ONE. I can’t say anymore than that though!

Setting aside the romance aspect of the novel, there is so much more going on. Between all the perilous journeys, there are secrets that Lia is in the wake of uncovering about herself, her kingdom and those that are closet to her father. I loved the chapter headings with the stories and “history” too.

It’s slightly confusing that only Emily Rankin is listed as the narrator. Not only is there a male that does the voice of The Prince, assassin, Kaden and Rafe, there is also an older woman who narrates the small parts before the beginning of each chapter. And I just want to KNOW who these people were! Anyway – Emily was perfect for the role of Lia. I loved her voice, and i think she did an amazing job. I often find myself searching for audio’s narrated by the ones I love and Emily is definitely on my list to search!

And the ending. PURE PERFECTION. Meaning, only slightly cliff-hanger. ;)

I feel like there was a bunch of random stuff thrown in, as a way to give us clues to the bigger picture.. Yet, there were never talked about again. Like, a tiger for example. What the freak was that? There is more, but this is driving me insane. Anyway – I am 99.99% certain that anything left unresolved will be handled in book 2.

I loved this book to pieces! It’s a such a beautiful book, truly. I can’t wait for book 2.

I never really write these reviews but always read them. There were some iffy ones that made me a little hesitant to purchase, but man am I glad I did.
There aren't many books that I hadn't figured out at least half way thru the listen- this book was the exact opposite. The author really keeps you guessing until the end.
When I realized with one hour to go there would not be a solid ending I purchased book two! The narrators were fabulous- all in all great book! Thank you!

Took too long to get to the point

Yes. This book could have been better, but it was too drawn out and I was waiting for something that never happened. Instead of breaking this into multiple books, there should have been more happening in this one book. By the time I cared what happened, it was almost over. I felt like this book was just a lead up to get me to buy the next book. If the next book was available now, I'd probably get it to see what happens since I invested so much time already. I think that I won't care anymore by the time the next book gets released.

The other thing that bothered me was that you didn't know which guy was talking for a good part of the book. Some of the sections would say they were the assassin, or the prince, or Rafe, or Kaden, but you don't know who is who. Some sections didn't say anything about who was talking, and both guys had the same voice. I couldn't keep track of what was going on, so I read through the reviews on Amazon to figure out which guy had which name. It helped me follow the book a little better.

The author's consistency when writing/narrating this story are poor. In the beginning, the reader has to figure out who is who based on the clues about each character, but once identities are confirmed in the last third of the story, the identities seem to be reversed.... This is rather poor practice.

Confusing story line but great over all book

Even with a bit of confusion on which male character spoke it was a good story. I don't know if the author was lazy or was intentional in causing the confusion by being as vague as possible when it came to them but once you figure out for sure which is which its easy to follow. Great story and lots of surprises

Would you recommend this book to a friend? Why or why not?
Let's say my friend is into love triangles, taverns, and plots with excessive explanation of ancient texts. Then I would say, dear friend, thou should read this book.

If you’ve listened to books by Mary E. Pearson before, how does this one compare?
First one. Can't compare.

Any additional comments?
I had a hard time connecting with the MC; there was something cookie-cutter about her that I didn't like, which hints at her not being a well-developed character. The same goes for her relationship with Pauline and her brother Walther. They lacked complexity and depth. And the boys, well, I pegged the wrong dude as the assassin, so when it's finally revealed who is who, let's just say I was disappointed. Most of what I thought made the character interesting was the fact his struggle was so much more meaningful, but that was me thinking he's the assassin (albeit,it's silly that he fell in love so quickly, but still, the conflict there is just so much more endearing). So when I find out my dearest assassin is *gasp* the prince, it only made me confused and annoyed, as though I got cheated somehow.

And don't get me started on the whole first daughter, the gift, ancient texts, magic, the gods, scriptures, blah, blah, blah...zzzzzzzzzzzzzzzzzzzzzzzzzzzzzz. I get that you need some serious world building in a high fantasy novel, but I found myself either not paying attention or fast-forwarding over most of the scenes/passages pertaining to it. They felt like big chunks of boring info dumps and I realized that I really didn't care to know or find out about Lia's sight/gift whatever-whatever or how it came to be. In hindsight, this is probably why I liked the prince's and the assassin's POV's better than the MC's.

The love triangle romance was too insta-lovey for my taste. Basically, these two guys fall head over heels for the princess with one look. I can maayyybee forgive the prince for being a shallow-arsed royal, but the assassin? Come on dude! You're an assassin!!! At least try to act like one.

I'm curious to read the second, but I think I'll wait on the reviews before I take the bait.

Narrators were excellent. Wonderful time and cadence.
Characters are intriguing and story moves along.

Plot is engaging and I loved sharing this with my teenage daughter.

A friend recommended this book to me and I wasn't disappointed. Will be purchasing the second one soon. Keeps you guessing and has an amazing storyline.

I thought it would be better

The performance is really good and I loved the different narrators.
But the story seems so naive and boring. The writing was so so, the imagination lacking a bit of boldness and I just can’t really grow to like any of the characters, they are all a bit too flat for my taste. The change of perspectives doesn’t do much for the story.
Overall, a bit disappointing, it could be written to be so much more exciting.

Would you consider the audio edition of The Kiss of Deception to be better than the print version?

Never read the print version of the book.

What was one of the most memorable moments of The Kiss of Deception?

The book was excellent overall. It kept your attention throughout.

Yes, I would love to listen to this book in one sitting. I was listen non-stop every time I was in the car.

I am lost for words with this one.
I am just glad I didn't find it when it was first released in 2014, or I couldn't have dealt with the wait for the next book.

I truly tried getting through this book since it’s not super long but I gave up. The female protagonist is so shallow that it hurts and the two love interests are both feeding into every stereotype of the male protagonist despite being oh so different from one another. Also, the story itself, although the idea had potential, was so dry, boring and repetitive that it made me cringe.