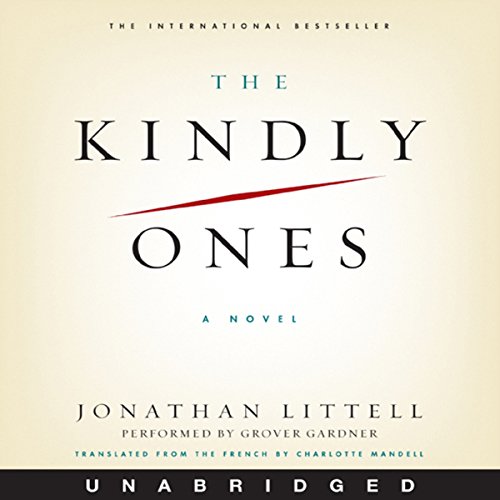 "Oh my human brothers, let me tell you how it happened." So begins the chilling fictional memoir of Dr. Maximilien Aue, a former Nazi officer who has reinvented himself, many years after the war, as a middle-class family man and factory owner in France.

Max is an intellectual steeped in philosophy, literature, and classical music. He is also a cold-blooded assassin and the consummate bureaucrat. Through the eyes of this cultivated yet monstrous man, we experience in disturbingly precise detail the horrors of the Second World War and the Nazi genocide of the Jews.

During the period from June 1941 through April 1945, Max is posted to Poland, the Ukraine, and the Caucasus; he is present at the Battle of Stalingrad and at Auschwitz; and he lives through the chaos of the final days of the Nazi regime in Berlin.

Although Max is a totally imagined character, his world is peopled by real historical figures, such as Eichmann, Himmler, Göring, Speer, Heydrich, Höss, and Hitler himself.

A supreme historical epic and a haunting work of fiction, Jonathan Littell's masterpiece is intense, hallucinatory, and utterly original. Published to impressive critical acclaim in France in 2006, it went on to win the Prix Goncourt, that country's most prestigious literary award, and sparked a broad range of responses and questions from readers: How does fiction deal with the nature of human evil? How should a novel encompass the Holocaust? At what point do history and fiction come together and where do they separate?

I found this book to be shocking but so well written that I thought the author had to have been there. The narrator was excellent. During the book I wavered between empathy for Max and revulsion. However, at the end of the book, when I though I had been shocked as much as possible, I was shocked again. I actually did something I seldom do. At the end of the book, I started at the beginning again.

The persistent question about the Holocaust is how Germany, such a cultured, civilized nation, could decide––in the 20th century, no less––that the life of the nation depended upon wiping out all of Jewry. Littell confronts this dichotomy through the person of his narrator, Max Aue.

Aue is knowledgeable about and interested in art, literature, philosophy and, most of all, classical music. But he is also a mid-level SS functionary and a cog in the machinery of death. He observes and writes reports about the Einsatzgruppen mass shootings, and selections and crematoria in the death camps. He regularly meets with Heinrich Himmler, Adolf Eichmann, Albert Speer and other big names in the history of the Nazis' genocide.

Aue suffers severe gastrointestinal illness from his field work, but he never connects it to the horror of what he observes. He believes in National Socialism and the Final Solution. When he becomes friendly with a linguist who tells him that Nazi racial science is utter hogwash, Aue responds that he has been given something to think about and wishes to return to the discussion, but he is saved from the necessity when his friend is killed. Instead, he continues to plod along in his career path and blandly reports it all to us in this lengthy novel.

So what's it all about? I came to the conclusion that, in essence, this is a history of the management of the worst corporation ever. A corporation whose mission is the most spectacularly wrong-headed and horrific thing imaginable–––but whose failure to achieve its goal is attributable to those most prosaic banes of so many companies: office politics and the peter principle. All the various functionaries spend most of their time squabbling with each other for position or to try to achieve whatever they think the Führer's will is. Since they are all petty men of limited imagination and intelligence, of course it's all a complete schweinerei, as Aue likes to call it.

Does that mean this is another novel whose point is the banality of evil? Not exactly. Aue is not just some Aryan in an SS uniform. He is one screwed-up bizarro. He has a sexual fixation on his twin sister, with whom he had childhood incestuous relationship, broken up by his mother and stepfather. He often digresses from his tales of another lousy day at work into lengthy, hair-raising descriptions of violence, repulsive bodily functions and sexual perversions, real and imagined.

Littell is not the first author to try to connect Nazism with sexually-related mental illness. It makes a sort of sense. It's somehow easier to understand the Holocaust if we tell ourselves that those Nazis weren't like normal people; they were a bunch of sickos. But I think this detracts from the story.

Littell could lose all of the psychosexual and endless scatological stuff and have a much more powerful narrative. Aue's screwed-up psyche gets in the way of Littell's point that there isn't not, in fact, some bright-line difference between normal, ordinary people and those who can participate in unspeakable horrors. Littell does an excellent job of showing how Germans involved in the genocide become increasingly desensitized and brutalized. It's unfortunate that this, the most powerful part of the book, becomes obscured by Aue's psychosis and his escalating perversity, including a ridiculously over-the-top murder subplot.

Still, despite its huge flaws, this is a tremendously ambitious book, well worth reading.

A revealing and matter-of-fact story of an SS Officer in Nazi Germany during WWII, this tale is both compelling and disturbing in turns. The graphic accounts of the character's life, both professional and personal (i.e., sexual) are not for the faint-hearted. The point of view was interesting as it gave insight into the seemingly mindless devotion of Hitler's followers and officers and why they may have willingly committed the atrocities of the war. Recommend!

The author has created a scholarly work of historical fiction that relates the madness of the SS and nazi Germany's decline and fall. The insanity of the main character is disturbing. I could not wait to learn how his world unraveled. Its story is what I would have expected the life of an SS officer to be like (weren't they all insane?). One of the cogs in the machinery attempting to use the Jews as slave laborers, to aid the nazi war effort, battling with the characters that wanted to carry out the "final solution" as quickly as possible. If one has studied any of the history of the nazis you cannot help be awed at the depth of research this author must have done to paint the story in its historical context. The imagery is will written. A very engaging book, but, as the Time's reviewer stated -- it's not for the squeamish.

The narrator did a great job. kudos to him.

The Disgust of the Mind's Eye

One of the most profound books of our time. Thematically is very disturbing both for it subject matter (the Holocust and the descent into Genocide) and its thematic matter (Orestes and the furries and a treatise of morality and teh law). This book will disgusts you . It will mock and punishes you for starring upon the horror of ourselves. It is challenging to overcome. But what do you expect from a book on this topic? A Pirates of the Caribbean version of the Holocust? We deserve this.

With that said there were sections where i almost gave up, there are 2 sections of the book where Little uses sexual hallucinations to invoke the furries. However these are a too long even for me, i am in no way a conservative but, jesus there is only so many ways to #@$#$ your sister. Make your thematic point and then move on. Of course the irony of being disquested at the main character more for his sexuality than his role in the holocust is irony in in itself

Far as history goes, As a educated amateur historian, i found this novel, extremely well researched and historically accurate except for a few editing errors. There is more accurate historical material here than most non-fiction books on the subject.

This book was fascinating, disturbing and almost too much for me to handle. Anyone interested in the perspective of World War 2 from a Nazi viewpoint will be impressed by the historical accuracy. I was riveted by most of the book but relieved when it was finished. Grover Gardner did an excellent job as always.

I have, in the last three years, read almost a hundred books of fiction. I can quite easily list the three bodies of work which were the most enjoyable, instructive, and otherwise influential to me. In order they are: 1) the entire 21 book series of Patrick O'Brian's Aubrey/Maturin historic naval literature (probably the best series of books I have ever read), 2) the three books of Neal Stephenson's Baroque Cycle (Quicksilver, The Confusion, and the System of the World), each book being better than the previous one, and 3)
Gregory David Roberts novel, Shantaram.
Now I add a fourth; The Kindly Ones.

A marvel of contemporary literature. Those who can not see beauty in the grotesque will call this book "trash". Those who can, will call it a "masterpiece". The images will never leave you.

A Dance of Evil & Fugue of Plagues

Littell uses Obersturmbannführer Maximilien Aue (a "cultured", SS Zelig) to explore how an unrepentant rationalist, a bureaucrat, an intellectual could participate in, defend, and justify the extermination of a race. Aue doesn't wrestle any Jewish angels. No, he wrestles himself, his country, his ideology, his sanity. The slow decent of mad Max is a way for Littell to explore the absurd and tortured NAZI self-justifications for their actions.

Littell also uses Max to incriminate us all as a species. How close are we to those in Germany during WWII? We like to think we are better, more moral, kinder, respectable, innocent. Are we? Or are we simply blessed by chance because we don't find ourselves surrounded by madness, wickedness, and final solutions? Does circumstance and chance really make us better? Does the fact that we find ourselves, by fate's mad roll, distant from both victim AND victimizer give us any room to think we exist in a field that really separates us from the horrors of Germany (or Nigeria, or Sudan, or Afghanistan, or Somolia, or Serbia, or Cambodia, or Burma, or North Korea)?

Again, this is not a novel for the faint of heart (or my mother). It doesn't have a happy ending. Hell, it doesn't have a happy beginning, middle, or single clean signature. It is a cold book sewn together with sick corruptions, musical madness, and omnipresent death. It is a dance of evil, a fugue of plagues, a bile-filled nightmare on every page. Yes, I'm glad I read it, but I'm also sure as f#&k glad it is finished.

I would be remiss if I didn't mention that J. Littell's dad is one of the greatest (not quite le Carre or Greene) spy novelists of the Cold War. If you haven't read any Robert Littell go and check him out if you think this tea is going to be too strong for you.

This is an excellent story about the horrors of Germany and WWII. The work could have used some editing, but in summary it was worth the listen.