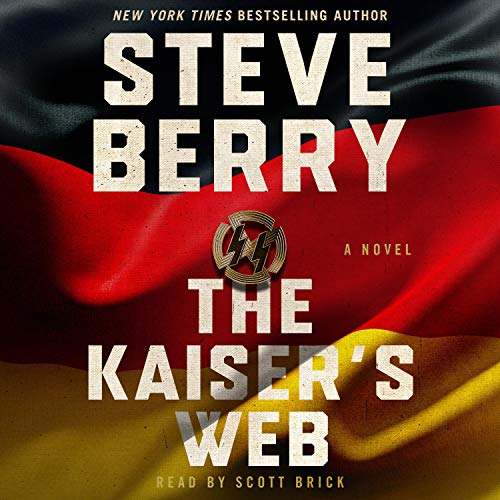 "This gripping audiobook, narrated ably by Scott Brick, focuses on the chilling premise that both candidates for chancellor of Germany are Hitler's children.... Brick's delivery is superb, bringing to the mic his ability to create unique voices - in this case, characters with distinctive accents from Germany, South America, and elsewhere. As the story unfolds, so, too, does Brick's intensity - right up to the audiobook's explosive conclusion." (AudioFile Magazine, Earphones Award winner)

This program includes an author's note read by Steve Berry.

Two candidates are vying to become Chancellor of Germany. One is a patriot having served for the past 16 years, the other a usurper, stoking the flames of nationalistic hate. Both harbor secrets, but only one knows the truth about the other. They are on a collision course, all turning on the events of one fateful day - April 30, 1945 - and what happened deep beneath Berlin in the Fürherbunker. Did Adolph Hitler and Eva Braun die there? Did Martin Bormann, Hitler’s close confidant, manage to escape? And, even more important, where did billions in Nazi wealth disappear to in the waning days of World War II? The answers to these questions will determine who becomes the next Chancellor of Germany.

From the mysterious Chilean lake district, to the dangerous mesas of South Africa, and finally into the secret vaults of Switzerland, former-Justice Department agent Cotton Malone discovers the truth about the fates of Hitler, Braun, and Bormann. Revelations that could not only transform Europe, but finally expose a mystery known as the Kaiser’s web.

"Brick is a masterful narrator, raising the tension in the action scenes while keeping the listener engaged in the slower historical segments." (AudioFile Magazine on The Malta Exchange)

"Narrator Scott Brick's smooth voice flows with the twists and turns of Berry's political thriller...Secrets unravel, and tensions rise as Brick shifts vocal focus from the historical secret society to contemporary conspirators who include corrupt politicians and judges." (AudioFile Magazine on The Lost Order)

This is more like it! this book was thought provoking and written in the style to which I am accustomed to reading in Steve Berry's books. I am so glad we moved beyond that constant interruption stuff in previous books.

For the Trump supporters who keep writing negative comments, get a grip, every book isn't about you or your beliefs 🤫. If you don't like something, don't read it. It's foolish to think everything is about you.

I really don't care for the anti Trump message of this story. I also don't like being demeaned for being a Trump Supporter. It seems to me Liberals have more in common with Hitler than Conservatives.

Just what I expected

I’ve been reading Steve Berry books for years, but this was my first audiobook by Berry. I love that he weaves real history into thriller plots, and I always like the author’s note that separates fact from invention. Over the years, I’ve imagined the voice of Cotton Malone, and this narrator is pretty close to that imagined voice. For the first chapter, though, there were a few moments that felt a little overdone as I was getting used to his voice and style. That said, I really appreciate that he didn’t use a weird high-pitched tone for the women, and the varying accents were subtle and skillfully done.

I like how this author blends history and modern day fiction. SPOILER ALERT! Suicide was the accepted solution at end of book. When one of the main characters was in a very difficult position Coton actually gave her his gun. NO sorry, I didn't sleep last night realizing that we had devalued life the point that we'll know author thought this was ok. There are always solutions, think of people she could have helped. Unbelievable and stupid ending. Mr Berry must never have had to deal with friends and family of someone that has killed themselves! I find this totally irresponsible and will never purchase one of his books again.

Soon to be cult classic

If Berry insists on yapping at the end the least he could do is thank Scott Brick by name, for he is the only reason I listened to this book. Further he is the only reason I enjoyed. As far as character, setting, and plot there are none and the story is told in one long act. As far as Cotton and his gang go they are barely there. After all he have Hitler here and his Pose so it stands that everyone else gets 3rd billing. I speak German and have lived and worked in German at Siemens no less, manufacturer of the gas used in some places to kill humans - mostly Jews. I know a lot about a lot. Most Germans I know of don’t actual frame reality the way characters do in the book, included one friend who was in Hitler Youth. I found myself automatically translating the English and German into actual German which I found pretty funny. Very funny. As I’ve gotten this far whoever directs Scott needs to tell him to not to get so hyper with his voice the plot however silly works fine own. This is a problem only in the first hour. The end is a complete cop-out and a failure of imagination. In this case the hard decision would have the reverse of what it was. A paid my money and have no regrets. Unt das ist alles. Ya!

What is Berry doing

This is the second Steve Berry Book I've returned - which is unfortunate as I love this series. His pivot into writing historical, political stories is not only different from his traditional form - but sadly not that interesting or well written. Solving ancient mysteries and the wild fiction of the old Cotton Malone is something I'll miss.

How irresponsible of the author to have a character commit suicide, with the help of another character. Everyone in the book seems to think this was a good thing to do.

The newest offering in this ongoing series starring Cotton Malone, Cassiopea, and Danny Davis. This one ties together various Nazi-era German characters, conspiracy stories, and urban myths into a sprawling arc that spans several continents, eras, and lifespans. Is it as good as some of the other stories in this series? Personally, it seemed something was missing, but again, that is more my prejudice I suspect than anything else. Clearly, and typically of Mr.Berry, it is well researched and based largely on fact and reasonable assumptions.
Scott Brick owns this series, and his voicings here are consistently sharp, which they need to be, as he needs to bring a variety of German accents and characters to the microphone.
I enjoyed this offering a great deal, and for fans of Nazi conspiracies, as well as the Magellan Billet, you will as well. Recommended.

Steve Berry has written another thought provoking book with The Kaiser's Web. The premise of this book is both scary and thought provoking. The details in the story are both from history and fictional. The imagery is spot on. Some of the characters are endearing while others are repulsive. Scott Brick is incredible at his performance. He brings the characters to life with his voice and gives them distinguishable voices. I fully enjoyed this listen and will definitely listen to more by this author and narrator.

This book was poorly written and contained zero imagination that Steve Berry is known for. The plot twists were foreseeable and blatantly obvious. I have read every Cotton Malone book and really wanted to like it, but was unable to. I read these types of books because the news is so bad nowadays, and I want a getaway. Now that he has gone political, this will be the last Steve Berry book I read. I truly wish I could get my money back.