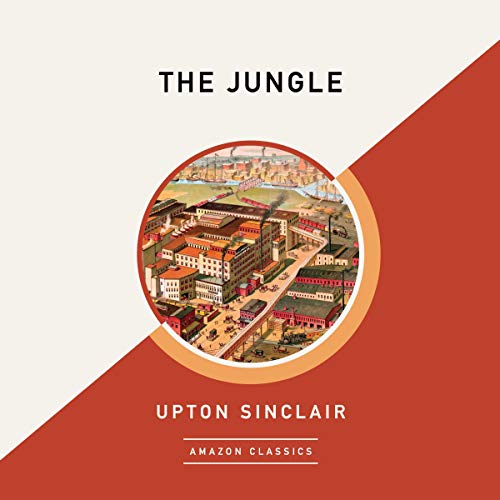 Lithuanian immigrant Jurgis Rudkus has invested every last hope in achieving a prosperous new start in a new country. But the only job open to him - in the appalling stockyards of Packingtown, Chicago - will become a brutal, dispiriting, and dangerous challenge to his pride, his family, his life, and his faith in the American Dream.

A scathing condemnation of capitalism, corporate corruption, and the exploitation of the working class, The Jungle was a sensation when first published. It stands as one the greatest and most influential proletarian novels ever written.

AmazonClassics brings you timeless works from the masters of storytelling. Ideal for anyone who wants to read a great work for the first time or rediscover an old favorite, these new editions open the door to literature’s most unforgettable characters and beloved worlds.

but really it's more of a "Call to arms"

well worth the time; certainly an amazing narrorator

a story to study

Very well narrated, the book explores agrarian and industrial attitudes setting up the conflict between capitalistic and socialistic views. As the main character journeys from hope to despair to hope again, this book should be revisited every 20 years to compare how the reader's attitudes have also changed.

I thought I knew the story, but...

Great performance, from a great classic. There was so very much more to the story than I had envisioned. It is a definite must listen/read for all of us.

If you got any kind of each, you will feel this dark story about a migrant family searching for a better life ( how relevant today). In a sense this book serves us as a reminder of what we can lose today if we meekly follow the billionairs ( you too Bezos) and what the West ignores about the ppl. who make our stuff cheaply.
The last 4 chapters aren't as strong as the rest but you have to except this book is more then a century old !