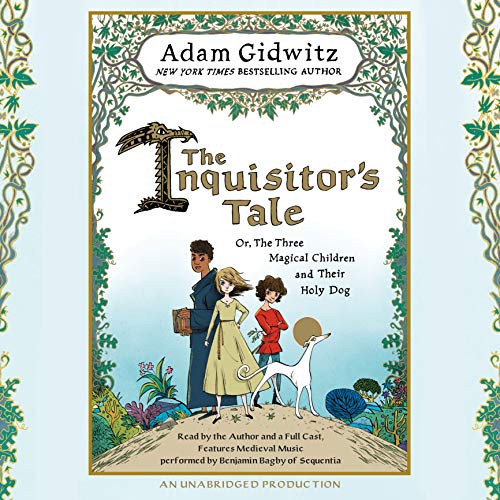 The best-selling author of A Tale Dark and Grimm takes on medieval times in an exciting and hilarious new adventure about history, religion...farting dragons.

1242. On a dark night, travelers from across France cross paths at an inn and begin to tell stories of three children: William, an oblate on a mission from his monastery; Jacob, a Jewish boy who has fled his burning village; and Jeanne, a peasant girl who hides her prophetic visions. They are accompanied by Jeanne’s loyal greyhound, Gwenforte...recently brought back from the dead.

As the narrator collects their tales, the story of these three unlikely allies begins to come together.

Their adventures take them on a chase through France to escape prejudice and persecution and save precious and holy texts from being burned. They’re taken captive by knights, sit alongside a king, and save the land from a farting dragon. And as their quest drives them forward to a final showdown at Mont Saint-Michel, all will come to question if these children can perform the miracles of saints.

“Gidwitz continues to toy with narrative in a well-researched and rambunctiously entertaining story that has as much to say about the present as it does the past...The tale that comes into focus is one of religious persecution and faith, friendships that transcend difference, and a dangerously flatulent dragon - Gidwitz continues to have no problem mixing high and low.” (Publishers Weekly, starred review)

"It is a time of miracles and saints, of fiends and dragons, all of which Gidwitz has meticulously teased from legends and histories of the Middle Ages...Gidwitz proves himself a nimble storyteller as he weaves history, excitement, and multiple narrative threads into a taut, inspired adventure.” (Booklist, starred review)

What a great historical novel for kids! My girls (6 and 9) really loved it.
My eldest almost couldn't keep listening because of the prononciation of Jeanne... my girls are Franco-American, and are really tolerant of Americanized names, but they hated ( so did I for that matter) the way the female interpreter pronounced the name. We would have preferred the anglicized Joan or even JAN ( it is pronounced ZHANNE) the way it was done in an exaggerated way with a French J but then followed through with the EXCLUSIVELY MALE prononciation of ZHAWN nearly spoilt it for my children.
As true history buffs, the author did a fabulous job of giving children a window onto what the Middle Ages might have felt like to a group of youngsters. I really loved the way the author tackled heavy issues such as racism and discrimination in such an accessible thought provoking way. Really wonderful writing!

I was recommended this title off of my Secular homeschooling list. However it is far from secular and far from just being an exploration of different faiths. It is very religious and it does require the reader/listener to suspend belief enough to believe in miracles and a god. That being said it is a great tale. VERY violent so if you have a child who is easily disturbed (I do not) be aware that heads get bashed in, a donkey gets his leg ripped off, and so on. The story begins with the death of a dog even.

Would you be willing to try another book from Adam Gidwitz? Why or why not?

Maybe. My kids really liked it.

Hmm probably the little nun. I don't think we are ever given her name. Just her penchant for ale and a good tale.

Maybe if the correct person did it and kept the religious themes toned down.

Good for kids if they are ok with violence with a side of god. My kids liked it, the fight scenes, the kids running from the law, all of that was entertaining. The idea of risking so much for what they felt was not worth the loss of human life was a bit harder for them but in the sake of fiction they were ok. At the end the author explains the historical parts which influenced the events and THAT was very interesting. There really was a dog considered for saint hood at one time.

So glad we chose this book to listen to as we traveled across country! Engaging, thoughtful, funny at times; The Inquisitor's Tale is a perfect addition to our study of medieval Europe. I especially loved the prologue from the author giving insight into the historical accuracy of some of the details in the book, as well as the rendition of The Tale of Hildebrand. Well done!

enjoyed this so much - the religious connections between our present world and the world of the middle ages was well articulated and made this a great book for conversation even with my 9 year old. excellent read!

Adam did a marvelous job with this. His rich knowledge of medieval history, his boldness of speaking about hard questions that often have misunderstood answers, and his ability to write about three wonderful children who are so relatable for us all when it comes to finding that "specialness" inside of us. Huge props to this powerful story.

Fabulous story for tweens to adults.

Brilliant weaving of history, religion, childhood hijinks into a fun, moving, compelling story. A bit violent at times (that's why the tweens recommendation) but playful throughout. Highly recommend!

I didn’t think I would be so easily entranced by a book set during the crusades, but this book picked me up and took me on the best journey! Very well researched and written and extremely fun to listen to. I can’t wait for my son to read it!

I found that it was hard to put down. I loved listening to it to fall asleep.

This has humor, history, and tragedy. It’s the best combination I can think of! I like how multiple voice actors help make the story even better!