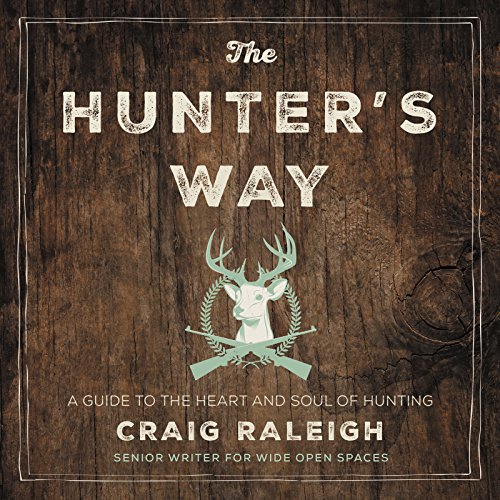 A thoughtful appreciation of hunting and a celebration of the outdoors that illuminates the hunter’s psyche, role, and influence on our culture.

"As we began to set foot in the outdoors we didn’t expect to learn something beyond where the deer were running or where the ducks were flying. Once we realized what these creatures really wanted, it was the opening of truth for us as hunters."

A longtime hunter and fisherman and senior writer at Wide Open Spaces, Craig Raleigh has spent most of the last 45 years of his life trying to find that elusive Holy Grail of hunting, that unimagined outdoor reality where one’s training, instinct, and experience converge into extraordinary bliss and accomplishment. He is the first to admit this does not entail the capture of a deer or an ever-evasive pheasant. It is the freedom to give back to the outdoors as much as one takes from it. For hunters, a life lived in the outdoors is massively rewarding and offers nonstop pleasures. It comes with the love of camaraderie, choice, and reward, and it provides a deep appreciation for the natural world.

The Hunter’s Way is his meditative and philosophical journey into the soul of a hunter. Divided into four parts that mirror the hunting experience - the background, the preparation, the hunt, and the harvest - it addresses the paradox of hunting as conservationism, ruminates on the failures and successes of hunting as sport and as a way of life, and reveals how hunting influences our society.

As Raleigh explains, the hunt is so much more than the kill. Most often, the hunter leaves the woods and fields empty-handed. Rather, the beauty of hunting is in the experience itself. As a hunter, you are constantly looking for clues. Yet in nature, signs are changeable, confusing, and never the same the second time. A captivating synthesis of On Trails, Norwegian Wood, and Shop Class as Soulcraft, The Hunter’s Way is a literary reflection and love letter to the value of hunting as both sport and way of life.

“Craig Raleigh puts hunting into modern perspective, combining higher sensibilities and his firsthand insight into the hunting world to gently illuminate a part of human nature that was, and still is, among the purest of human endeavors.” (Jim Shockey, award-winning writer and host of Jim Shockey’s Hunting Adventures and Uncharted)

Interesting summary of the values and motivations of those who hunt

Interesting summary of the values and motivations of those who hunt. 2 stars for the narrator because of “geeky” voice. This subject needs a more masculine voice to be credible.