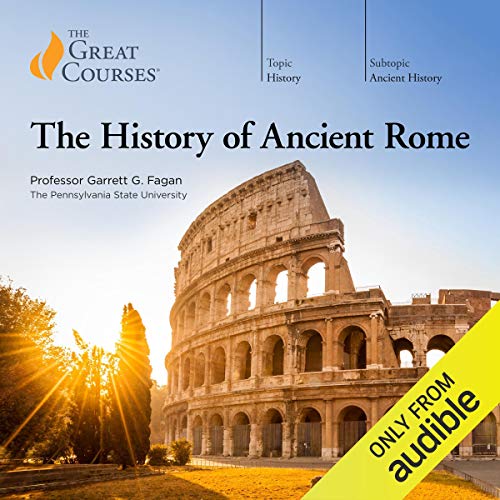 The History of Ancient Rome

Even today, the influence of Ancient Rome is indelible, with Europe and the world owing this extraordinary empire a huge cultural debt in almost every important category of human endeavor, including art, architecture, engineering, language, literature, law, and religion. At the peak of its power, Rome's span was vast. In the regional, restless, and shifting history of continental Europe, the Roman Empire stands as a towering monument to scale and stability, unified in politics and law, stretching from the sands of Syria to the moors of Scotland. And it stood for almost 700 years.

In this series of 48 spirited lectures, you'll see how a small village of shepherds and farmers rose to tower over the civilized world of its day and left a permanent mark on history. In telling Rome's riveting story, Professor Fagan draws on a wealth of primary and secondary sources, including recent historical and archaeological scholarship, to introduce the fascinating tale of Rome's rise and decline, including the famous events and personalities that have become so familiar: Horatius at the bridge; Hannibal crossing the Alps during Rome's life-or-death war with Carthage; Caesar being assassinated before a statue of his archrival Pompey; The doomed lovers Antony and Cleopatra; the mad and venal emperors Nero and Caligula; the conversion of Constantine.

The course also addresses one of history's greatest questions: Why did the Roman Empire fall? And you'll learn why most modern scholars believe that the empire did not "fall" at all, but, rather, changed into something very different - the less urbanized, more rural, early medieval world.

Let me first preface my review by saying that I was a history major in college, and I have long had an interest in Ancient Rome. I have read many books and watched many documentaries on the topic over the decades. So, I am not a newcomer to this topic, but I still learned things in this course. The professor is cogent and organized and provides a good timeline. My main complaint is that this is a little too much of a broad survey course for such a nuanced and important part of history. The later part of Roman history especially gets short shrift, though, to his credit, the professor warns the listeners at the beginning of his intent. He justifies this at least somewhat by arguing there is a nebulous line between the end of late Roman period and the beginning of the early Medieval period. While there is an argument to be made for his approach, I wish this one of the Great Course's 60 lesson classes to give enough time to do more justice to the Imperial and late Roman periods. That being said, I will give the professor the benefit of the doubt that he did not have a say as to the length of the course.

I really liked the professor's tempo of switching between political and social history. He struck a very nice balance, which is often hard to do with many courses becoming overly dominated by one or the other.

Would you listen to The History of Ancient Rome again? Why?

The material was compelling and a journey into the past by a great professor.

The profound amount of change and struggle on how Rome evolved. I never knew and so glad I bought this.

Have you listened to any of Professor Garrett G. Fagan’s other performances before? How does this one compare?

I thought he spoke very well and for the amount of info I had to learn his cadence and tone was very good and I was hooked and attentive throughout and would buy another w/him.

I missed out on this history during HS and College and my curiosity led me to this book. I listened on way to work for about 4 weeks, one lesson each day, before my trip to Italy. I always wanted to know about this history and found it truly fascinating and exciting to learn something I may have missed. I'd never go read this and audio made it the only way to go. I think worth the investment of time if you want to round out your knowledge base on the world this is a must.

This is my favorite of the Great Courses. I find all their history series enjoyable but this is truly superb.
- It holds up well and is understandable even if you have little to no background knowledge, but is also enjoyable even if you know much of the material.
- Fagan has an excellent balance of covering the facts and the story, yet also alerting the listener to major schools of interpretation. (Some of the teaching company courses assume a basic knowledge of the information, which can then make them difficult for the beginner.)
- Fagan has a wonderful accent and delivery style, and even a bit of dark humor.

This was so good I'm looking for his other courses and might re-listen to this one. I was so very sorry to see that he died recently, much too soon.

I was disappointed with this course. I found it a superficial and unsatisfying listen. There were a few really excellent and perceptive lectures, but that was more the exception than the rule. I don't think the shortcomings are Fagan's, but more due to the format, which consists of lectures that average about 20 min each, and don't allow for much analysis. Even Fagan seems frustrated by this - constantly reminding listener of and apologizing for the many things that he will not have time to mention on the course.

Where does The History of Ancient Rome rank among all the audiobooks you’ve listened to so far?

Well paced, with narrative giving way to thematic discussions toward the end; professor is extremely knowledgeable with sense of humor that leavens the topic just enough

Have you listened to any of Professor Garrett G. Fagan’s other performances before? How does this one compare?

A Fine But Very General Overview of Roman History

This is a good read for anyone who wants a broad overview of the history of Rome. The lecturer does a great job delivering his content and he covers Roman history from its origins in myth, legend, and archaeology as a series of settlements on the banks of the Tiber and continues its journey through its monarchical period, the Roman Republic, the Imperial period, and ends around the fall of the Western part of the Roman empire in the 5th century AD. He is thorough and roughly chronological in his presentation.

However, anyone who considers listening to this should understand that this audio book is "broad" in the fullest sense of the word. The lecturer makes no attempt at being comprehensive and tells his listeners time and again that he cannot and does not make an attempt to treat any topic in great depth. This means that anyone looking for a thorough overview of any aspect of Roman history and culture, such as literature, art, architecture, religion, military history, political history, or even the careers of indispensable figures such as Caesar himself should look elsewhere. This was my only "disappointment" with this book. I entered into it hoping to learn much more about many of these specific elements, but left feeling like I had learned only a very little about a very lot of material. I do not think this is any fault of the book or the lecturer though. There is so much potential content to cover that one has go to more specialized studies if you want to go into any depth. So in summary this book will give you a good overview, but only an overview. Those who already know a lot about Roman history will find little to learn here, but those who don't or have only a vague sense of it will definitely benefit.

All told this is a good overview of Roman history and a worthwhile listen. Enjoy your travels to the ancient Mediterranean!

As an amateur with a long interest in Roman History I found this series highly engaging and incredibly informative.
Professor Fagan has an easy style and the content is simply brilliant. The flow of the narrative is superb and the connection to the thematic section of the course is well constructed.
I have read bits of Pliny and currently I am reading Gibbon. I feel these are works that require a solid base in Roman History prior to attacking and I now feel like I am armed to teeth thanks to this course.
Thoroughly recommended to anyone with anything from a passing interest to a life long love affair with Roman History.

So Much Better Than Reading a History Book!

I'm currently about halfway through Professor Fagan's "The History of Ancient Rome" in Audible's Great Courses, and it's been well-worth every minute. I am a high school Latin teacher, and I needed a good refresher course on Roman history, as it's been a long time since college. Not only is the material fantastic (despite early attempts to just listen while doing laundry, etc., I've planted myself in front of my laptop because I can't stop taking notes), but Dr. Fagan is an entertaining speaker. (He has a wonderful accent.) The combination has made Roman history far easier to get through than would be a traditional textbook.

This course took me back to the Western Civ, Latin and Philosophy courses in my undergrad years, which were wonderful for their own sakes. Not because I _need_ to know this stuff, but because I _want_ to.

I highly recommend this course for anyone interested in renewing their own curiosity. It you have a trip to Rome planned, it certainly can have practical uses as well.

Should have been called "We don't know anything"

This might be the course that turns me off of Great Courses if not Audible. For every minute of interesting information, there is then 5 minutes of why what he just said might not be true, how there are a variety of opinions and differences of opinion on this, how little in fact we really know, etc. This is probably very relevant to a student of history who wants to understand the history of history.

The end result is a plodding narrative filled with more qualifiers than statements.

The important points in high relief

The great art of story telling in history is focussing on the important points and reconstructing the past, in this case a long gone past in an intelligible way for the layman. I think Prof. Fagan has quite cleverly and successfully managed this task by mixing a lot of social, economic, cultural background information in the narrative of the plain facts. Covering more than 1000 years in one course of 48 lectures means by necessity this is no more than an introduction to Roman history. But you can hardly look for a better starting point.
And the performance of the lecturer is of the highest standards, I just enjoyed listening.