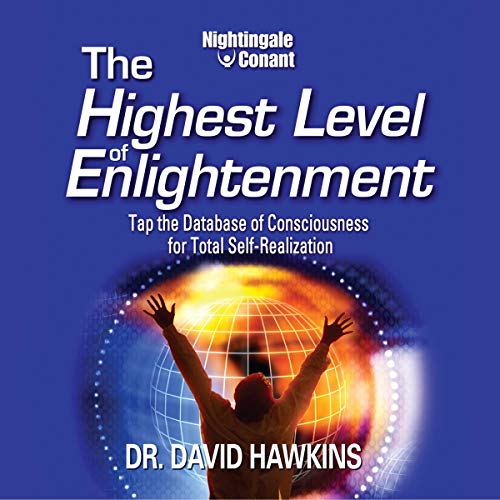 The Highest Level of Enlightenment

Dr. Hawkins's research is based on a well-established science called kinesiology, which has to do with the testing of an all-or-none muscle response stimulus. A positive stimulus generates a strong muscle response and a negative stimulus results in a demonstrable weakening of the test muscle. Clinical kinesiological muscle testing as a diagnostic technique has been verified widely over the past 25 years.

Not only that, but this simple method has also been demonstrated to be an effective tool for instantly calibrating human consciousness. Hawkins created a scale of consciousness based on current discoveries in advanced theoretical physics and the nonlinear dynamics of chaos theory. And this "map of consciousness" now makes it possible for anyone to advance toward higher levels of enlightenment faster than ever imagined!

After listening to this program, you'll be able to:

Worst audio book I have ever heard in my life.

If David Hawkins were not in it.

Any thing other than something by David Hawkins.

The Budda chant at the end.

I need to delete this audio book from my library so the energy from it does not contaminate the rest of my library books.

This audio book provides usable wisdom to improve your evolutionary state of being. Highly recommended.

Truth explained clearly.
Repetition is needed for reprogramming. My ego was trying to distract me so Repetition is the key.

I find that this is a wonderful compilation of the great lecturer and I highly recommend it.

What the f!!?? I bought this book thinking it was the actual book as is advertised!!!!! I don’t want to hear about some guy talking about what it did for him!!!! I want my money back

SORRY TO HAVE BOUGHT IT

THE LECTURES ARE GIVEN IN A VERY UNPLEASANT FORM. FOR SUCH A SERIOUS SUBJECT THE AUTHOR IS LAUGHING EVERY 2 MINUTES.

Very good. I will have to listen more than once, but I will enjoy it.