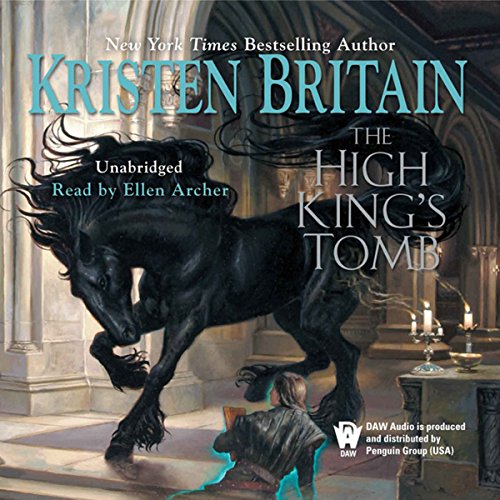 A thousand years ago, the armies of the Arcosian Empire, led by Mornhavon the Black, crossed the great sea and tried to conquer the land of Sacoridia—and during Karigan G’ladheon’s early years as a Green Rider, Mornhavon’s spirit, sensing weakness in his prison walls and seeking vengeance, began to wake.

With the ghostly help of the First Rider, Karigan had managed to drive off the spirit of Mornhavon—but for how long, no one could know. And now, the descendants of those Arcosians are ready to strike, reaching out to claim the land their forebears had tried to conquer. Worse, these vengeful enemies had spent generations honing their powers of dark magic—a force against which the Sacoridians had no defense….

Would you consider the audio edition of The High King's Tomb to be better than the print version?

I haven't read the written version.

What was one of the most memorable moments of The High King's Tomb?

The scene in the tombs where Keri. is dressed in black.

She is WONDERFUL! She doesn't read the words she puts so much feeling into the words. Ellen is easily in my top five narrators and I have listened to over 150 audiobooks.

Some say this book wasn't as enjoyable as the first two books. I have to say book three is just as interesting as the first two. We simply didn't have a BIG battle to deal with, just little skirmishes to move the characters around. I think I would be disappointed if every book had the same plot formula to it. This book took a small step back to allow the reader to take a breath, but it doesn't mean that this book was boring by any means. As the story goes on the life around K gets larger and the author spends a little time in different places with different characters to keep it all going. Otherwise we would spend time with the main character and wonder what was happening at the wall or K would show up at the wall and we wouldn't have a clue as to the struggles that occurred there. I enjoyed this story just as much as the other ones and couldn't put it down.

Not as good as the first two. I sure hope that the next two improve. There was to much of the nonessential in this book that was distracting. Although I really like the most of the Green Riders and the premiss that they are based on. Personally, felt like the future Queen unworthy and whinny. Sure hope that the love triangle between the Green Rider, King and Queen is resolved in a manner that doesn't let the cast system dictate it's outcome.

I find myself really liking the King. Can't really see where the 2nd Empire plot is going. I am sure it has to do with the fall of the wall. Alton's plight is discouraging because he showed such promise.

Will see what happens. Have to admit I am hooked on the Green Riders and their interesting characteristics. Hope this review helps without too many spoilers.

Another gripping continuation of Karigan's story

I really enjoy Karigan's adventures and truly love how the narrator tells the story! It's amazing how she creates all the different characters and lets their adventure come to life! Enjoyed this book better than the second. Looking forward to the next.

Missing the last few minutes of the end

yes I would! I love the entire series so far

Have you listened to any of Ellen Archer’s other performances before? How does this one compare?

The voices that she does are just Awesome

I love this series! And I thought I had screwed up somewhere, but the last few minutes or so from the last chapter are missing! It just stopped mid sentence.

a nice easy read and listen. my only negative thought is that I get so engrossed in the story that I have been late getting back to work several days after listening and losing track of time. beautiful performance and lovely singing.

Love this book and the reader! She does an amazing job and switches voices well! Highly recommend this series!

Great first 3/4 of the book

Loved the first 19 hours. I understand the title and cover art focus on centrality of the last 1/4 of the book, but when Karigan is transported on the stallion into the tomb scene I felt the fascinating story just tumbled into surreality to make sure that it is Karigan who saves the day while every one else is sidelined. Of course we have always known that the wall is wrapped up in other-worldly forces, so that part of the story just plays out as expected.

delightful tale I hope to continue

this series is the best I've ever read. I have read and listened to it so much I can recite it by heart never gets old. .... the voice is relaxing and really pulls you in.

Love the different voices of the narrator. The characters are rich and complex. I like to see Karigan change and grow.

I love this series; I was disappointed that halfway through this, the third book, it dips down into the realm of tawdry romance novel type sex scenes. I was really disappointed because there had been really nothing of the sort until now. I would say you could just skip through it, but, of course, some important information is revealed in the midst of the scene.

Still a silly mix of Arrows of the Queen, Tolkien and a every romance novel ever. At least the main character has a sense of humour.