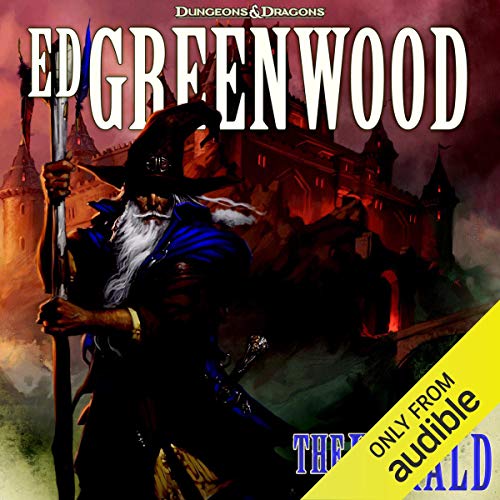 In the sixth and final book of the multi-author Sundering series, launched by New York Times best-selling author R.A. Salvatore, Ed Greenwood, the creator of the Forgotten Realms, further chronicles the exploits of Elminster as he fights for the future of Faern.

Chaos grips Faern as vainglory, prophecy, and ancient forces comingle in the shadows cast by war. Agents of the Shadovar lurk in the corners of Candlekeep in search of the arcane secrets that will power their war machine toward Myth Drannor. Gods and their Chosen run amok, all in a gambit to seize power. And a threat foretold by an ancient seer stirs. At the heart of it all, Mystra, the great Goddess of Magic, has withdrawn from the world. Without her protection, Elminster, her greatest champion, fears for the nascent Weave, the fabric of magic Mystra wields to bind Faern. Will the Nightseer Shar, mistress of the great and fearsome Shadovar, seize the opportunity to blanket the world with her Shadow Weave?

With the help of Storm Silverhand and his protégé Amarune, Elminster works frantically to strengthen the Weave's tethers and forestall what seems an inevitable reckoning. But other interests machinate for their own sinister ends.

As the Sundering draws nigh, Elminster and his heroic cohort must see the signs for what they are. The choice of worlds lies in the balance.

I finished this book faster than any other.
The Forgotten Realms definitely are a different place now a days.
Elminster's doesn't disappoint.

Oh my God's....not only could I not stop listening (though I did sleep and work), I found myself wanting to know more about each character. Each of them needs their own series. That said, I hope they make this series into a graphic novel. Well done!!!

The end of the Sundering story arc, must be read so you know the ending.

Another fantastic epic story from the master himself. Wonderful voice talent and editing too. A true must for any fan of Dungeons and Dragons and the Forgotten Realms. Thank you all involved in bringing this wonderful tale to life!

one of the best elminster books ever.

this book incorporates ppl and features from other books elminster books so well; I truly wish to read the next great^10 daughter of elminster book. the sundering is such an important piece of DND this should be read by all DND fans. it really brings a heaviness to my heart to understand the weight of the transition of 3;4;5. but this book is gold. I had to re listen to many parts to capture each moment correctly. non stop action. non stop awesome.

The series ends strong with Elminster and a great narrator. My only complaint is that the powers in this book are so great that sometimes it seems like important details get rushed over. I really got the feeling sometimes that only El and the gods understood what was going on. hah!

Tell me why this Sundering thing started again? Was it to bring back characters from R. A. Salvatore's dark elf series? Why were they killed again? Why were they brought back right after this book? I mean seriously none of this makes any sense to me!

This book is a good story, but you could tell what was going to happen before it happened. With this in mind there is no back story for the main characters or who all these gods are their talking about. If the author would stop telling readers what is coming as well as giving us a back story all of this would have made such a great story! Maybe the author should go back and do a pre-story which gives us the whole backstory on the main characters like who are the sisters?

Hey if your a fan of Forgotten Realms you certainly can't miss this exciting conclusion to the Sundering.

Just skip to the last 20 pages

Would you try another book from Ed Greenwood and/or John Pruden?

Every secondary character the narrator did sounds like a buffon from a children's cartoon TV show.

This book and it's performance is poorly done. The story comes to an abrupt end out of left field. It was like "Oh. We won. Sorta. Good job every body." This is probably my least favorite Greenwood book to date.

And the narrator is terrible. Everything sounds like it came from a Saturday morning cartoon.

A bit of a letdown

The book felt .. rushed.
Minor spoilers follow.
The title had nothing to do with the book. Yes they mention a Herald at times, but really it seems just thrown on there.
The ending was incredibly short. He spends 20 chapters saying how El is less than he was 100 years ago then BAM, world shattering magic .. the end.
The 4-5 chapters happening in Cormyr are nothing but fluff. They add zero to the story and just increase the word count.
For a book that is supposedly an ending to a world changing series it barely interacts at ALL with the ongoing events. Again, it's mentioned but not really a topic in the novel.
It's like calling a book "The Home Run, part 6 of the baseball story" and then finding out it's a murder mystery that only has baseball when the guy sees it on tv for 3 paragraphs.