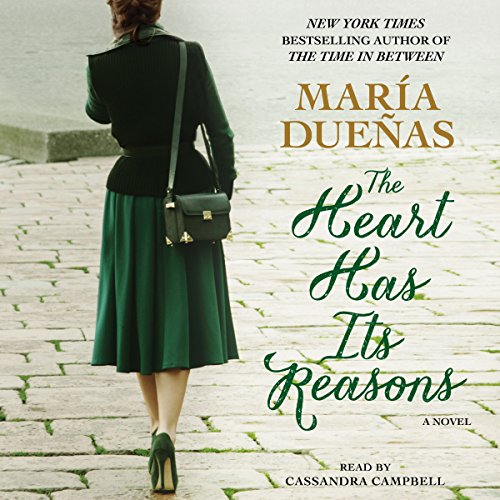 The Heart Has Its Reasons

Declared “a writer to watch” (Publishers Weekly), New York Times best-selling author María Dueñas pours heart and soul into this story of a woman who discovers the power of second chances.

With her debut novel The Time in Between, María Dueñas garnered outstanding acclaim and inspired a TV series, dubbed the “Spanish Downton Abbey” by the media. USA TODAY said of the book: “From a terrific opening line to the final page, chapters zip by at a pulsing pace.” Now Dueñas returns with a novel about a heartbroken woman’s attempt to pick up the pieces of her shattered world.

Blanca Perea is a college professor in Madrid who seems to have it all. But her perfect career and marriage start to unravel when her husband of 20 years suddenly leaves her for another woman. Devastated, Blanca is forced to question the life she once had and how well she truly knows herself. She leaves Madrid for San Francisco, where she becomes entrenched in the history of an enigmatic Spanish writer who died decades earlier. The more Blanca discovers about this man, the more she is enthralled by the ill-fated loves, half truths, and silent ambitions that haunted his life.

With lush, imaginative prose and unforgettable characters, The Heart Has Its Reasons is a journey of the soul that takes listeners from Spain to California, between the thorny past and all-too-real present. It is a story about the thrill of creating one’s life anew.

I wish audible books had the original version in Spanish!

Not as good as the Time in Between

Felt like this could have been half the length. Character development is interesting but the action a bit too slow for me. A bit drippy at times. Had high expectations after A Time in Between but it fell short.

The theme has potential and the characters are sympathetic but the narrative is weighed down with irrelevant details and lacks passion. The metaphor are obvious and uninspired.

A good editor could have cut down the length by at least -100 pages and given the narrative a faster and more passionate tempo.

Initially, I chose this book because of its historical focus on the California missions. It's so worthwhile remembering all of the cross cultural influences we share in this country. There is so much more to the story though—of friendship and the academic world and the transitory and turbulence of love. The narrator is perfect for the novel.

For whom what I recommend this book? I suspect 40 years ago I might have found the story at times to move a bit slowly. Not now. This is a book searching to meld what Duenas calls the fragments of life. When you are ready, read it and remember how much like parallel lines our lives are.

What would have made The Heart Has Its Reasons better?

No.
I guessed the entire story in the frist 10 minutes.

What was most disappointing about Maria Duenas’s story?

she has an accent in both languages

If you could play editor, what scene or scenes would you have cut from The Heart Has Its Reasons?

Disappointed with this boring story

I loved loved loved 'the time in between' but was very disappointed with this book. The story was dry and long winded and the characters were forlorn. I jetted waiting for the story to get better. But it never did!!
Boring !!!
And on top of it all the narrator read slowly and monotone. That alone was tedious I actual had up the speed of the narration.
Hoping Maria Duenas next book is better!!