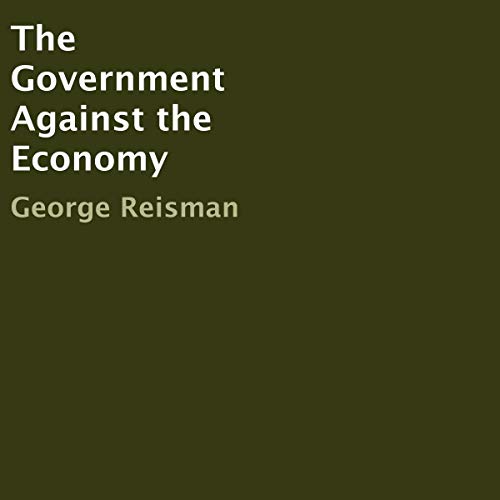 The Government Against the Economy

Originally published in 1979, and later incorporated into the author’s magnum opus, Capitalism: A Treatise on Economics as Chapters 6-8, this is a powerful and convincing book which explains the essential principles of free-market price theory along with leading applications of those principles. Again and again, it illustrates the economic coordination of a free economy by contrasting it with the chaos produced by price controls and, as the ultimate culmination of price controls, socialism.

Written for the intelligent layman who may have no previous knowledge of basic economic theory, this book not only shows where government policy went wrong in imposing price controls, it also shows how free-market prices are essential to the success of our economic system in producing for the benefit of everyone. Included are explanations of: how a free market would progressively reduce the cost of energy, along with that of all other goods; why the Arab oil embargo would not have been a threat to a free economy; how price controls actually raise prices; how partial price controls lead to universal price controls; how universal price controls represent de facto socialism; why Nazi Germany was a socialist country; and why socialism, rather than representing any kind of genuine economic planning, is in fact chaotic and necessarily tyrannical.

For those who want to understand how a free-market economy really works and how price controls and socialism create chaos and poverty, this book is mandatory listening.

Here is what two of the most famous advocates of the free market have said about this book:

“Every commentator on current affairs who is not a fully trained economist ought to read this book if he wants to talk sense. I know no other place where the crucial issues are explained as clearly and convincingly as in this book.” (F. A. Hayek, Nobel Laureate in Economics for 1975)

“This is one of the most powerful and convincing books I know. Its explanations are brilliantly clear; its analyses are lethal; it is uncompromising. Readers who come to it without any previous knowledge of basic economic theory will find it a luminous introduction. If any book can slow down the economic destructionism of our age, this could be it.” (Henry Hazlitt, economist, author, former Newsweek columnist and New York Times financial editor)

Americans overwhelmingly are anti capitalist. They have learned mostly through government monopoly compulsory schooling to become more like Russians and if there is the rare american that doesn't want to give up his power he wants the government to take yours and give it to him.. We live in an America with a corrupt government ; whose mission is to take your wealth and give it to the connected,