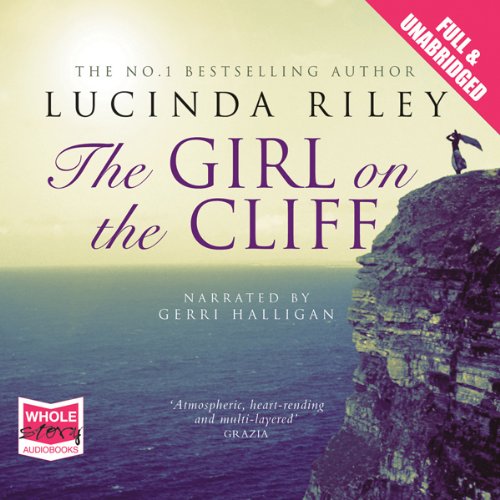 The Girl on the Cliff

Troubled by recent loss, Grania Ryan has returned to Ireland and the arms of her loving family. It is here, on a cliff edge, that she first meets a young girl, Aurora. Strangely drawn to Aurora, Grania discovers that their families are deeply entwined. From a bittersweet romance in wartime London to a troubled relationship in contemporary New York, the Ryans and the Lisles have been entangled for a century.

Sweeping Family Drama Beyond my Expectations

“The Girl on the Cliff” by Lucinda Riley was different from any book that I have read. There were so many stories wrapped up in two families that I was mesmerized until the very end. I listened to this book as an “audible” on my Kindle. The narrator, Gerri Halligan, must have been challenged by all the different voices, but somehow she made each character stand out as their unique selves.
The modern story of Grania and Ryan was often frustrating because of the stubbornness of the characters, but that didn’t detract one bit from the book. I was actually speaking to Grania out-loud at certain times in the book - wanting her to just open up about what she was thinking and feeling!
The history of the two main families of the book – the Lisles and the Ryans – takes the reader on a journey from World War I to modern day. We hear much of the story told by Aurora Lisle whom Grania meets in Ireland upon the cliffs above the sea. Their two families had been sharing a history with secrets, betrayal, and love since the first World War.
The reader visits the different decades through memories. One of my favorite characters was Kathleen, Grania’s mother. Her compassion and protectiveness for her family was endearing. Even though her character suffers a great deal in her early years – she doesn’t appear to be bitter. Aurora’s character is enchanting and hard to forget.

love the story, but not the American dialog

Enjoyed the story, but the terrible American dialog very nearly ruined it. The author seems to think that Americans, even those with PhD's, actually speak in the voice of Mickey Rooney in 1930's teenage movies. Every other word is "real" as in "real happy" or "real sure." I expected the next phrase to be "real swell." In my 72 years in America, I have never heard anyone speak in such a terrible manner. Where was the editor?

I loved the book - it was a wonderfully entertaining story. If you like pure historical fiction though this might not be one for you as about 60% of it takes place in present day. Just a head's up.

It's a bit cliché, but so what... It's a great story that kept me listening endlessly.

The narrator is great EXCEPT for her American accent, it was a little annoying and pretty inaccurate, but overall she has a lovely voice and is a great performer!

I thought this was a good story. It was a little predictable but still worthwhile. If I could change anything it would be something about Grania. Because she was a major character and intertwined in the story, she is very important. However, at times unlikeable, annoying, and unconnected. Grania’s and Matt’s dialog with the “honey and baby” got to be very over the top. Also, I would have liked to hear more of a back story about Ann’s Russian mother. I’m not sure if changing these factors would elevate the book to a “great”.

What was one of the most memorable moments of The Girl on the Cliff?

Lucinda Riley did a remarkable job moving from past to present. I prefer listening to stories from the past, but because she kept a natural flow to the story, the present day story was also captivating. Listening to the story of Mary was the best part of the story for me. I liked Aurora as the narrator of the story, she was the glue that put it all together.

I really enjoyed this novel. I think it is the best out of her books that I have read thus far.

I couldn't stop listening now I want more. Well read and the author's books I've heard are all a journey through history.

This book was just great and it is definitely well worth your time. I throughly enjoyed it!

I liked that the story spanned generations and that the characters were connected. I guess the part I liked least is that I wanted more.

It was very sad to me that Anna, who seemed such a sweet girl, turned in to a negative character. I could not see how or why she had become the way she had become. It would have been nice to have had some insight into her behavior. She suddenly veered off of the track I saw her on and became a nearly separate character with her later behavior. It just felt off and out of place.

Did Gerri Halligan do a good job differentiating all the characters? How?

The narrator did a great job with the characters however, the American accents were awful :)

I would rent it or get it on netflix

What would have made The Girl on the Cliff better?

It was beyond help!

What could Lucinda Riley have done to make this a more enjoyable book for you?

She could have portrayed the Americans in the story as REAL Americans! Using phrases such as " How's it Hangin, Baby," for every greeting used by the male character, Matt, was unforgivable. Not even in the '60's did we all speak with that slang. It was hideous! At first I blamed it on the reader, but then realized she was only reading what was written.

Again, her American accents were completely absurd, has she ever actually Heard an American speak that way? I haven't!!! It was terrible, and completely turned me off.

If you could play editor, what scene or scenes would you have cut from The Girl on the Cliff?

All of them that were supposed to be spoken with an American accent.

Certainly not worth your time or credit!

As is usual with Lucinda Riley's novels, it's great story telling. We have strong female characters, a family history that reaches back about 100 years, and somehow, history seems to repeat itself. Or does it?

Grania has some decisions to make, but emotionally, she isn't really in a fit state to make the right ones. It doesn't help that her mum keeps warning her, but takes much too long to tell her why she shouldn't do what she does. What about Aurora and her dad -- do they have sinister motives?

Grania will find out, even to the point of no return.

Gerri Halligan as narrator was excellent. I had all the various characters right before my inner eye, and having their voices in my head made the story even more compelling.

Such a great, emotional story with just a hint of the supernatural. So far my favorite book by Lucinda Riley.

on the very top of all her stories

what a Story!!!!
I could not stop listen to it. The various characters very well developed and described. The story itself very special with extraordinary and surprisingly unexpected twists along the road. Very well norrated - a pleasure to listen. To me the best book I have ever read from Lucinda Riley.