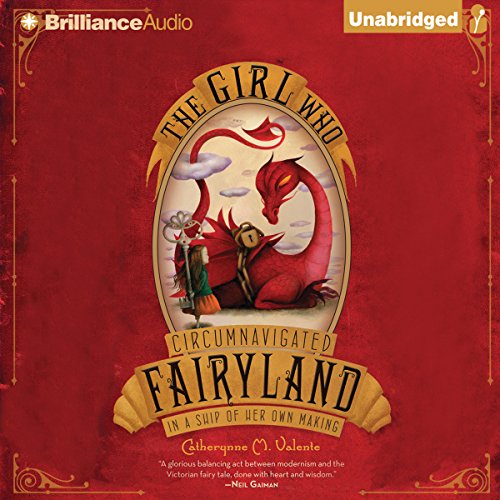 September is a girl who longs for adventure. When she is invited to Fairyland by a Green Wind and a Leopard, well, of course she accepts. (Mightn’t you?) But Fairyland is in turmoil, and it will take one 12-year-old girl, a book-loving dragon, and a strange and almost human boy named Saturday to vanquish an evil Marquess and restore order.

"This is a kind of The Wonderful Wizard of Oz by way of Alice's Adventures in Wonderland - it's the sort of book one doesn't want to end." ( Publisher's Weekly)

Nurturing your child within

The Girl Who Circumnavigated Fairyland in a Ship of Her Own Making is a really excellent fantasy for everyone who still has a child within. The narration (by the author) is perfect and adds much to the experience. Although not as good as Through the Looking Glass, it is pretty darn good. I enjoyed the characters, the subtle humor and lyric prose. Although slightly dark the spirit is bright and comforting. I wish my daughter was eight years old again. This would make a nice continuing bed time story.

The most charming book I have read since childhood

"All children are Heartless. They have not grown a heart yet, which is why they can climb tall trees and say shocking things and leap so very high grown-up hearts flutter in terror. Hearts weigh quite a lot. That is why it takes so long to grow one. But, as in their reading and arithmetic and drawing, different children proceed at different speeds. (It is well known that reading quickens the growth of a heart like nothing else.) Some small ones are terrible and fey, Utterly Heartless. Some are dear and sweet and Hardly Heartless At All. September stood very generally in the middle on the day the Green Wind took her, Somewhat Heartless, and Somewhat Grown."

This book is every fairy tale and children's story and sad and happy and thrilling and scary Disney movie you ever saw, back when you were young enough for Disney movies to be taken at face value and you hadn't learned how to be cynical yet. Catherynne Valente writes with beautiful fairy tale prose that still sounds contemporary, and she balances the zaniness and fantasy of a down-the-rabbit-hole adventure with the darkness of true fairy tales and the lurking shadow of adulthood that only the finest children's authors can blend into a children's story without turning it either absurd or rendering it into something clever, something maybe even fun but not quite timeless. The Girl Who Circumnavigated Fairyland in a Ship of Her Own Making is a story that should become immortal. It should join Alice in Wonderland and The Wizard of Oz and The Chronicles of Narnia and yes, Harry Potter on the shelf of books for Every Child in the World.

I don't read much YA, and I read very little MG fiction, but this book won my heart and turned me into that 10-year-old who knew he was reading something wonderful again. If you have kids, read this to them, and if you don't, read it for yourself, because it's clever and subtle enough that even adults will find their hearts touched.

The Girl Who Circumnavigated Fairyland in a Ship of Her Own Making begins with an ordinary 12-year-old girl named September who is taken by the Green Wind to Fairyland. It's so sudden and arbitrary it takes you a while to realize that Valente is very deliberately telling you right up front: "Yes, this is one of those stories where a child gets whooshed off to a magical world, and I'm not even going to bother making up a warddrobe or a tornado or a letter from Hogwarts to justify it." No, the Green Wind, wearing green jodphurs and with gold-green hair, just up and carries her away. On a leopard.

September, who is an ordinary girl with ordinary levels of intelligence, bravery, compassion, and maturity, then has Adventures. She makes friends. She is scared. She gets hurt. She is betrayed. And she discovers why she was brought to Fairyland. At every step, Valente shows a conscientious awareness of all the stories she is paying homage to -- sometimes she winks at them slyly, sometimes she practically dances them across the page complete with ruby slippers -- but this isn't a rip-off or a copy or a retelling, it's a new story. And September is awesome.

Cathrynne Valente's narration isn't exactly professional caliber compared to the professionals who narrate most audiobooks, but she does of course know all the places to put emphasis and all the emotions each line is supposed to invoke and she conveys them well, so listening to the author read her own book is, in this case, not a bad experience at all.

The narration is bad enough that I won't finish.

They should have hired a professional to do the narration. The author spoke too fast, needs to work on enunciation and has no skill at verbally bringing the characters to life. Very few authors are also good readers. I am disappointed because I was looking forward to listening to this story.

wish the writer wasn't reading it

What was one of the most memorable moments of The Girl Who Circumnavigated Fairyland in a Ship of Her Own Making?

the ending scene when she fought with marid

Who would you have cast as narrator instead of Catherynne M. Valente?

Anyone honestly, with all do respect to the writer but she should just stick to writing. it was very hard for me to listen to hear voice.

What is this thinking that the author of a book is somehow the best person to read the book. Not so in this case, AT ALL. The whiny character voices, the growly, too-low reading, the running out of breath before the end of sentences . . . seriously detracting from all else.

Would you recommend The Girl Who Circumnavigated Fairyland in a Ship of Her Own Making to your friends? Why or why not?

not in audio form

Why do authors read their own books?

Would you be willing to try another one of Catherynne M. Valente’s performances?

Nope. I never got through this one. Her voice, frankly, annoyed me so much that I simply couldn't listen for longer than 30 minutes.
The only author I have - so far - been able to hear reading his own book, is Neil Gaiman. Everyone else has been a huge disappointment.

The one star for story and for overall might very well be misleading. I never heard more than the first 30 minutes, then I turned it off, since I could not bear listening to the voice any more.

Someone who isn't annoyed by a boring, flavorless voice

A PROFESSIONAL reader! Why wasn't this done????

Book is fine, reader is awful

The author has destroyed her own work......a beautiful, imaginiative, complex world reduced to cold oatmeal by her own bland voice. So sad. How did the producers let this happen???

Like Alice in Wonderland, only relevant. It's poetry without the pretense.

If you like a great bedtime fairytale read by a voice like spun honey on fresh bread from the oven. You'll LOVE the fairlyland series.

Cannot WAIT to to read the next one.

A Ravishing Romp Around Fairyland

Listening to the audiobook of Catherynne M. Valente reading her young adult novel, The Girl Who Circumnavigated Fairyland in a Ship of Her Own Making (2011), was thoroughly enjoyable. What an extravagant and exuberant book it is, effervescing with the joys of language, imagination, story, and Faerie, and yet grounded by the depth of human experience. Valente's narrator is witty, wise, and sympathetic, and her reading voice enhances her narrator's character perfectly. Although she does not alter her voice much for her different characters (male or female, young or old, human or Fairy, etc.), she gives each of them just the right emotion and intention for their various moods and agendas. Her own nonchalant yet passionate voice invokes a poetess who loves language but does not take herself too seriously.

Listening to the book Ravished me to Fairyland along with the heroine, September, a bored and lonely 12-year-old girl living in Omaha, Nebraska, when out of the blue a Harsh Green Wind carries her off to Fairyland flying on his Leopard of Little Breezes. She soon learns that the inhabitants are not happy under the bureaucratic rule of the Marquess and finds herself forced to go on a quest. September is spunky, sharp, loyal, and sensitive, and when she needs to tell a lie, she says "I want to go home."

Valente playfully and originally uses familiar genre elements like personified winds, fairies, gnomes, gargoyles, witches, golems, werewolves, shadows, and changelings, as well as more unusual ones like Pookas (shapeshifting fairies from Celtic folklore), Glashtyns (horse-headed men from Manx legends), and Nasnas (demonic people with bodies cut vertically in half from Arab mythology). She's on the side of the magical and monstrous.

I chuckled with pleasure to hear Valente rattle off fantastic lists of things like the different dishes at a Spriggan Halloween wedding feast and the different fabrics used in the composition of the buildings of Pandemonium; and to hear her describe the different physical features of her different characters, like the blue-skinned, heavy and slight, whirlpool-tattooed Marid boy Saturday and the Wyverary A-through-L (whose mother was a Wyvern and his father, he believes, a Library), whose "lizardish skin glowed a profound red, the color of the very last embers of the fire" and who smells "like roasting cinnamon and chestnuts"; and to explain things like why children are heartless, why their courages are clean, and why they run faster than the speed of a kiss.

And she's also good at making the reader shiver or sigh or cry, as when the Leopard of Little Breezes growls at September, "We came for you . . . Just you"; Saturday finds a way to avoid having to whip the Velocipedes (wild bicycles) to make them go faster; the Marquess tells her story; and September learns the difference between those mortals who Stumble into Fairyland (via tornado or wardrobe) versus those who are Ravished there (like Persephone or me).

2009 Nebula Award. A marvelously original, lyrical fairy tale that captivates and awes. September’s adventures through Fairyland with Ell the Wyvern and Saturday the boy marid. It all starts with the Green Wind and ends with a missing shadow. Shoes and laws, choices and love are main characters in this magical erudite journey sure to delight and wonder.