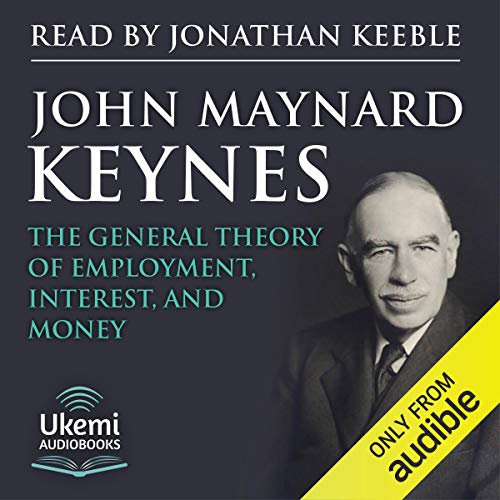 The General Theory of Employment, Interest, and Money

Keynes’ The General Theory of Employment, Interest, and Money remains, approaching a century after it first appeared, one of the most important documents on economics, along with Adam Smith’s The Wealth of Nations and Karl Marx’s Capital.

Hugely important for much of the 20th century, the General Theory was seemingly overtaken by monetarists but won a new, enduring respect among a new generation of economists and politicians following the financial difficulties which began in 2007-8.

John Maynard Keynes (1883-1946) promoted a middle way between the Marxist approach of total governmental control and those committed to, essentially, allowing markets to operate largely free of restraints. He saw the need for central intervention, especially at times of crisis, but always acknowledged the importance and the contribution of individual enterprise within a free market system.

First published in 1936, Keynes’ ideas had evolved during the difficulties following World War I in Europe, and the US crash and the Depression of the 1920s-'30s and the misery of mass unemployment. He deplored the situation where a few individuals or companies stored massive wealth while vast numbers experienced poverty and insecurity (his alarm bells ring today!) and sought to promote initiatives where governments could intervene with social projects to keep money fluctuating.

The General Theory is a stimulating and challenging work. Keynes presents his case with minimum jargon and admirable clarity. He does use formulae to support and clarify his case, and in some cases these have been included in the narrative in a manner which can be absorbed. In the few more complicated cases, the formulae are available on pdfs which can be downloaded with this recording.

The introduction on Keynes life was good, but there is too much math to be communicated in an audio book. If you want this one get it in print.

The book is full of formulas and notations and absolutely not feasible for audio. Waste of time and money

Keynes in the car...

I think it would be beneath Keynes for me to really critique him. He is worth listening to on both sides - much like Hayek and Smith, in modern discourse I find him significantly misunderstood and caricaturized all too frequently both to advance and to reject policies for which he, himself, appeared to have, respectively, little favor for or little criticism for. The narration is good, but it could use more post-processing so that the volume level were more even and it were more easily listened to in cars, trains, or other noisier environments, since a major benefit of the audiobook is being able to listen to use this kind of time for learning and reflection.

Stop listening to the TV talking heads that tell you what Keynes said. listen to his own words and form your own opinion.

very dry reading. Use of charts and equations does not work well for this audio book. I have read several books on economics and have to say this one is difficult to understand because the author is trying to invent a different school of economics and he is hypothesizing his theory. I understand that the theory laid out here is very popular with those who run our economy and I am not quite sure if that is good or bad. I can't help feel the theory he lays out here is manipulative and wrong, yet it does seem to work as implemented... until of course it doesn't.

Would take reading several times to fully understand, but probably not worth the effort unless you are an economist.

Generally, it seems that Keynes is a left-leaning economist—contrasted with Hayek. But in reading this book, Keynes doesn't make any appeal to ethics. This book is an investigation into the relationship between savings, investment, and capital. Although you could say that, if you follow through with some of Keynes' suggestions, you get pro-social outcomes, this doesn't make him pro-social. Apparently he was actually a very active investor, and quite a wealthy man.

Keynes was a proponent of increasing consumption—a prescription that no longer makes sense in our peak-everything world. This also applies to the wealthy, as, if wealthy people don't spend their money, wealth inequality just gets worse and worse.

This book is slow going. In the introduction, he states that his primary audience is economists, so maybe this was to be expected.

Cons: The material is a bit too dense and technical for audiobook format

Great book. Really enjoyed it. Well narrated by Jonathan Keeble. I highly recommend it to people interested in Keynes.

Informative and easy to understand

Written very well and speaker was easy on the ears. this book is a good look into economics.

Wealth of information. May not be the best format

This isn't an easy audiobook. To really get anything out of this work you'll have to listen to this multiple times.
The mathematics of the formulas are mostly quite simple, but it's difficult to follow when the author & narrator just refer to the variable names.
I think this would've been better if the narrator referred to the things the variables represented rather than just the variable names. In a textbook you can easily outage back to see what the variable represents. That is not easy to do in an audiobook.