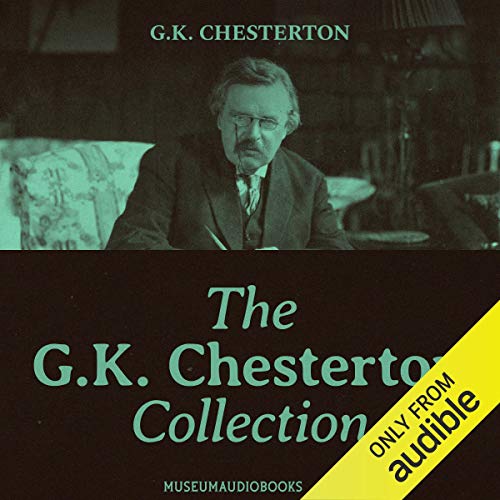 Gilbert Keith Chesterton (1874-1936) was a British writer, philosopher, lay theologian, and literary critic. Chesterton wrote around 80 books, several hundred poems, some 200 short stories, several plays, plus 4,000 essays and newspaper columns. He was a columnist for the Daily News and The Illustrated London News.

Book One: Heretics is a collection of 20 essays and articles by G. K. Chesterton, in which he appraises prominent figures of his time in the worlds of literature and the arts. He scrutinises the work of luminaries such as George Bernard Shaw, Rudyard Kipling and H. G. Wells with insight and wit, criticizing those who hold incomplete and flawed views of "life, the universe and everything". His observations on Omar Khayyam and Kipling are laugh-out-loud funny, for example when he questions what, exactly, it is that Kipling has always tried to say?

Book 2: Orthodoxy (1908) by G. K. Chesterton is a classic of Christian apologetics. The book is a companion to his volume of essays titled ‘Heretics’, and focuses on the Apostles' Creed. It was written when Chesterton was an Anglican; he converted to Catholicism fourteen years later. The prose is witty and incisive, meaning Chesterton at the height of his power.

Book 3: The 1909 novel The Ball and the Cross by G. K. Chesterton is about the struggle between a worldly and religious worldview, represented by a ball, and the cross representing Christianity. The first part of the novel involves debates about rationalism and religion between a Professor Lucifer and a monk named Michael, while the rest of the narrative concerns dispute between a Jacobite Catholic named Maclan and an atheist Socialist named Turnbull. Both hold fanatic opinions and prepare for a duel which is proposed but never fought, inspiring a slew of comic adventures with allegorical dimensions.

Book 4: In What's Wrong With the World, G. K. Chesterton discusses big business, education, government, feminism, and more. The work draws on thousands of essays Chesterton contributed to newspapers and periodicals over his lifetime. Eloquently opposing materialism, hypocrisy, and snobbery, Chesterton was a steadfast champion of family, faith, and the working man.

Book 5: Published in 1911, "The Ballad of the White Horse" by G. K. Chesterton is a poem about the deeds of King Alfred the Great. The epic ballad tells the story of how the King defeated the invading Danes at the Battle of Ethandun in the Valley of the White Horse, beneath an ancient equine image on the Berkshire hills.

Book 6: The Flying Inn is a satirical novel by G K Chesterton, first published in 1914. The story is set in a future England where a repressive ideology dominates the country’s political and social life. The narrative follows the adventures of Humphrey Pump and Captain Patrick Dalroy as they travel around the country in a donkey cart with a barrel of rum in order to evade prohibition.

Book 7: A Short History of England (1917) is Chesterton’s commentary on the philosophical social, religious and history of England. The book focuses on those highlights that have shaped the nation, and is presented in the author’s customary wit. Having already displayed strong Roman Catholic leanings at this time of his life, the author equates Anglicanism and other forms of Protestantism as forms of atheism, but does commend the upliftment achieved by the Wesleyans. Chesterton views the story of England as the story of robber barons who became an aristocracy and who concealed their rise to power and hegemony through parliament.

Chesterton published an essay in response to an English minister’s objection to people sending cigarettes to British soldiers fighting in the trenches of World War I, titled ‘The Dregs of Puritanism”. He writes that a large number of young men were being hurt by shells, bullets, fever, hunger and horror of hope deferred. The “good reverend”, however, was anxious that they should not be hurt by cigarettes. Chesterton asked the clergyman who would try to enforce the prevention of cigarettes being sent to the front. He added that historically, some Puritans could read well, think clearly, and write great literature, for example John Milton, but that modern Puritans could do none of the above.

Book 9: "Liberalism: A Sample" is an essay by G K Chesterton which appears in “Utopia of Usurers and Other Essays” (1917). It concerns the astounding baseness to which journalism had sunk. Asking why party political journalism was so bad, Chesterton states that it is even worse than it intends to be. He claims that the newspapers simply cannot argue, and do not even pretend to argue. And that there’s a sort of carelessness in their degradation, so that they assume that the reader does not have a mind.

It’s difficult to sum up this vast assortment of works by Chesterton, because it’s not all entertainment and not all philosophy and not all spiritual. However if I’m pressed to choose a favourite, it would be the Flying Inn. Steward Crank does a brilliant job to bring this tale to life. It is a buffet and needs to be approached as such.
If I have one complaint it is that the whole thing is simply arranged as a mass of chapters instead of titles, so one cannot select what one is in the mood for.

The reader makes the difference

I love Chesterton books. However, I have found that the reader makes the whole difference. This particular reader fails to convey the intensity and beauty of “Chestertonian” ironic argumentation.

I love GK Chesterton. How much? Well, I bought this collection even though I already own a couple of the incuded books/essays contained within it. Imagine my dismay when, after eight hours into a fifty-one hour book, with many a wince and groan, I realized I simply could not bear another minute of the narrator, much less forty-two hours more
Chesterton demads a great deal from a narrator, even though his language is so concise and voice characterization elements are as scarce as hen's teeth Someone like Simon Vance or John Franklyn-Robbins; Frederick Davidson or even John Lee would have been vastly better. My personal preference would have been Ralph Cosham, who did such a stellar job with CS Lewis' apologetics body of work.
I have to return this book.

Although the broad content and length may appear daunting, the breadth and scope of this collection is brilliant but written in such a way that most can understand and appreciate the wisdom and wit of this great philosopher!

the first reader has a beautiful singing voice

wonderful set of works here, I love buying collections, such a better deal! the Flying Inn was made especially beautiful by the singing voice of the narrator

Only complaint is 50 hours is not enough Chesterton . A hidden treasure, a dangerous man in his joy.