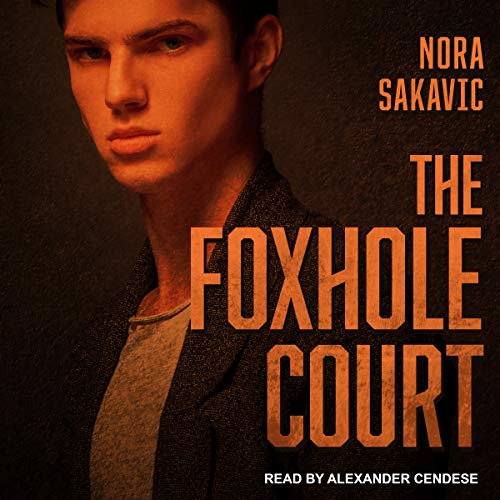 Neil Josten is the newest addition to the Palmetto State University Exy team. He's short, he's fast, he's got a ton of potential - and he's the runaway son of the murderous crime lord known as the Butcher.

Signing a contract with the PSU Foxes is the last thing a guy like Neil should do. The team is high profile, and he doesn't need sports crews broadcasting pictures of his face around the nation. His lies will hold up only so long under this kind of scrutiny, and the truth will get him killed.

But Neil's not the only one with secrets on the team. One of Neil's new teammates is a friend from his old life, and Neil can't walk away from him a second time.

Neil has survived the last eight years by running. Maybe he's finally found someone and something worth fighting for.

the accent of the narrator is sometime hard to understand for non native speaker.

This book makes my heart ache (in a good way)

This book makes my heart ache (in a good way).
And it healed me. I have read the books in paperback format and fallen in love, now I get to do it all over again with a narrator that isn't a construction of my own imagination.
Do yourself a favor and take a chance on this gem of a masterpiece, a slowburn that will scorch you to the core if you let it.

As someone who has owned the physical and kindle books for a good 5 or so years now, I'm going to say this: I've been waiting for the audio versions for so very long that this sorta feels like a dream. On that note, I've got some warnings to pass out to those of you on the fence about this series.
1. It is an LGBT series. Two of the main characters end up in a 'relationship'. There isn't anything porny, but they do end up doing things. That's more on book 3 though, so read at your own risk and know what you're getting into.
2. This series, maybe not book 1, but definitely 2 and 3, should have a lot of warnings in them. Trigger warnings pertaining to Rape, Torture, Drug and Alcohol abuse, and a couple more (Like seriously, on Tumblr there is an entire list of warnings that might keep you from reading the books)
3. Despite all of the warnings, it is an amazing series. If you've ever been down on your luck, if you've ever had possibly the worst moments of your life happening all at once and leaving you at your version of rock bottom, you'll connect and fall in love with these characters. Each one has a past and each one has suffered for it, it's what makes them Foxes in the first place. This is their second chance, their third, fourth it doesn't matter, as long as its one chance more than what the rest of society has given them.
4. Suspend your disbelief about Andrew's drugs. its a made up drug and the effects aren't pretty, but they are consistent. It induces a sort of manic euphoria that makes it hard for Andrew to keep focus, or to remain 'down' for too long. It forces him into a constant sort of high.

On that note guys. I fucking loved this story, but it does not belong in the relationships and romance sections. Hell maybe not even the teen section. I'd sorta understand it in the sports section, or the LGBT, or whatever. I love it, it was worth it.

favorite book ever! not let down at all. I like the voice actor too. he could make andrew sound a little colder and more emotionless when he is sober though. that way theres a clear difference between the two. but overall I love it :)

The story was but the narrator's male voices were indistinguishable and his female voice were a joke.

This book floored me!

A friend recommended this book to me, and while unsure at first I was soon sucked into the twisting story and beautifuly harsh characters. It captured me, and I'm IMMEDIATELY starting book 2! If desprate high stake competition pitted on damaged, dysfunctional teammates with life or death consequences sounds good to you, I suggest giving this book a go. The relationships between these characters that are strong yet broken just beneath the surface, is heart racing, and I can't wait to see how everyone grows, facing such dire challenges.

I read these books last year and now I'm loving the audio! Can't wait for more!

I was extremely happy to see this on Audible and immediately bought it! Everything about it was fantastic and I can’t wait for the next book!

I discovered this book years ago and endured the agonizing wait between the publication of the books. I’m so excited to discover this audiobook version as print isn’t easy anymore. I am really hoping the others will be coming out soon. Meanwhile I am going to tackle my ebook copies again.
I really love this series and have reread it several times. It struck a chord, but I cannot comment eloquently about it. Please read someone else’s 5 star review for why I love it so. Highly recommended.

I've read this series several times and I loved the audio. i just need the next book. PLEASE!

you gotta check it out for yourself

“It’s about second chances, Neil. Second, third, fourth, whatever, as long as you get at least one more than what anyone else wanted to give you.”

reread august 2018 (my fourth read of this book)
can't believe i read this book again, but the audiobook just coming out it's totally justified! right??

wow man i loved it so much more then i thought i would! at first, i didn't like the narration (just different than i thought it would be) but i got used to it and they did a good job with it overall. i can't wait until the other books come out on audio!

i love this series so much. great listen. can't wait for the next instalment in the series.