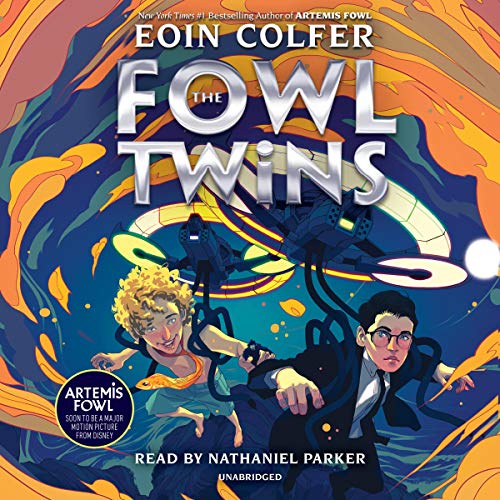 The Fowl Twins, Book One

With all the hallmarks that made the Artemis Fowl series so popular, this hilarious spinoff adventure stars Artemis' younger brothers, along with a nefarious nobleman, a shadowy nun, and a fairy intern, and a maverick troll.

One week after their 11th birthday, the Fowl twins - scientist Myles, and Beckett, the force of nature - are left in the care of house security (NANNI) for a single night. In that time they befriend a troll who has clawed his way through the earth's crust to the surface. Unfortunately for the troll, he is being chased by a nefarious nobleman and an interrogating nun, who both need the magical creature for their own gain, as well as a fairy-in-training who has been assigned to protect him.

The boys and their new troll best friend escape and go on the run. Along the way they get shot at, kidnapped, buried, arrested, threatened, killed (temporarily), and discover that the strongest bond in the world is not the one forged by covalent electrons in adjacent atoms, but the one that exists between a pair of twins.

A Cute Story for Kids (And Longtime AF Fans)

The Artemis Fowl series has long been near and dear to my heart. I read the original series as it was released, and I truly grew up with it. I adored Artemis and his adventures, and I was proud to be a nerd, too.

This is a kid’s book. And I don’t say that to trash it! It’s an enjoyable story that clips along with flatulence jokes, funny voices, dastardly plans and hijinks that’ll make any preteen laugh. The new characters introduced are enjoyable, and Colfer didn’t reinvent the wheel here. I was a touch disappointed in that regard at first, but I think this is Colfer re-writing the classic Fowl schtick for a more modern kid audience.

The villains are...for kids. The voice acting was a bit overdone here, I think, but again — it’s a children’s book. Any kid would laugh out loud listening to it, I think. I smiled a number of times myself. The plot is a touch predictable, but it features some unforeseen twists here and there.

There are very few references to the original series, and you hardly see Artemis at all, which I’m sure was intentional. So, you don’t need to be familiar with the series to enjoy the book (but you should read at least the first three!)

The ending definitely leaves it open for a sequel, which I’m sure there will be at least one or two more — and I’m sure I’ll pick them up.

If you’re an adult who is brand new to the series, I recommend picking up the original book series first. It’s been a number of years, but they are *slightly* more mature.

If you have a kid who’s interested, I say go ahead and jump in. And if you grew up with Artemis Fowl like I did, give it a listen. It’s a cute ride that reminded me of all the hours I spent obsessing over the series as a child. It brought me a lot of smiles.

I rarely write Reviews but...

I am rarely compelled to write reviews of books that I listen to, but I feel that this deserves a fair shake. I have been a long time fan of the Artemis Fowl Series, The last few books in that series were unfortunately in my opinion lackluster at best, but this one has breathed new life into a dying series. The plot was compelling (maybe a bit predictable at times for older readers), the characters were fun and imaginative, the gadgets were satisfying and believable, and the whit made me laugh out loud at some points. To summarize, if you still fondly remember reading your first Artemis Fowl book this will bring you right back to that point. I highly recommend fans of the series give it a listen.

it was a bit of a slow start after coming from the Artemis Fowl series and I wasn't sure it would keep my interest. But it delivered! The plot progressed and had me laughing quite a bit with Beckettes voice and personality and the twins interactions with each other. Great job!

Not Artemis Fowl but a worthy addition

Technology of the Faerie people seems to have increased in the years between the last Artemis fowl book and the story of our twins here. I’m a bit confused as to why humanity and the Faerie people have not begun to mix and mingle as was suggested at the end of the Artemis Fowl saga, but the story is still suits the slow progression of this universe and still warms the heart with its fresh new ideas.

Colfer has done it again

Fantastic story that keeps you laughing until the end. The Antics between the two brothers will keep children delighted and parents laughing in fond amusement

A wonderful introduction to the Fowl world! I can't wait for the next book! I love that yin and yang of Miles & Beckett & they play off each other's energy. If you loved the Fowl series you'll love these new characters!

It's definitely not Artemis!

I Love! soo many of the previous titles by Eoin Colfer, and have in fact listened to them numerous times. They were tightly honed, action propelling storyline and deeply 'insightful' long-winded (but not tedious) descriptions that made you laugh at their sly innuendo or playful ideas artfully presented but only after you were already along some action line which drew your interest. You knew the subjects well through their action - and then their ideas and insights. All endearingly engaging as Eoin is Unbelievably Imaginative!
But sadly...The Fowl Twins starts out soo Droll. It was dreadfully long winded with descriptions and information we could really have lived without until down the line once we Knew the subjects and were fully engaged. Heavy-handed humor spelled out repeatedly instead of slid in sideways or with a quick sly twist. I almost couldnt get through the beginning hour but persevered in hopes. I wondered if it was a different author trying to sound like Eoin Colfer! Similar engaging ideas but poorly presented?
Sad to say, I cannot finish it. Even tho there was finally action, it is just too Trite. Great possibility, poor follow-through.
Deep Sigh. Please come back Eoin!

I was curious how this book would measure up to Artemis Fowl series and I wasn't disappointed, I felt like a kid again listening to this capturing story, it was great!

Eoin Colfer is back to it again, fantastical situations made believable. I enjoyed going on this adventure immensely. My only small criticism is of the over explanation of some points. However, it does not take away from the overall story. The author definitely left an open door in the plot for another book.

Loved every second of it.

As an avid reader, the option for an audio book is a lovely change. Add to that a book that will allow me to envision the characters and their plots...I'm in heaven.

Myles is definitely a mini-me Artimis and Beckett...while appearing to be "dumb" is actually quite smart.

Can't wait to read what's next in the series.