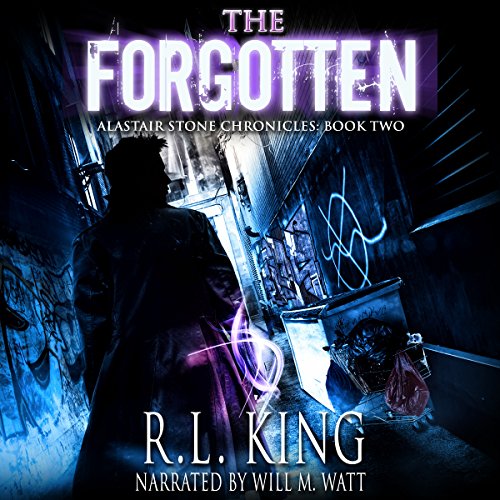 When a friend asks Alastair Stone to question a disturbed child who's committed a horrific act, Stone has no idea what kind of rabbit hole he's starting down. His investigations uncover more instances of appalling crimes, all committed by people with no history of violence. And other people have turned up missing.

It's not long before Stone crosses paths with Jason Thayer, a young man searching for his runaway sister who might be a victim of the same bizarre affliction. Together, Stone and Jason are embroiled in a network of odd homeless people, strange symbols, a growing conspiracy, and deadly danger. Even if they find Jason's sister in time, there's no way to know if they can help her--and it's soon clear that the problem is a lot worse than they originally suspected.

What do you do when you discover an extradimensional plot that threatens the safety of the entire world, but you can't tell anyone about it because literally anyone on Earth could be part of it?

Interesting story with some strange construction

This didn't feel like an Alastair Stone book He seemed like a secondary character, and honestly not a very interesting one. This could have been a completely stand alone book and I think it would have been better for me. I don't understand the basic construction of the book. The POV from Jason and the interlude device were especially out of place; Jason was fairly annoying in general. I'm definitely not an author, but it wasn't a smooth experience for me.

If you’ve listened to books by R. L. King before, how does this one compare?

I much rather enjoyed the first book - I prefer the narrator especially.

This narrator's american accent was a off just enough to be occasionally distracting. It would have been less of an issue if the author had written this with Stone as the protagonist.

Overall I did like the story and enjoyed the narrator's Stone voice. I'm glad I listened to it, but it definitely didn't seem as well constructed as the first one.

I really enjoyed the first book, especially the narrator, it was incredibly distracting at the beginning of this one to not only have a different narrator but starting out Will M. Watt's lisp was extremely noticeable and distracting; it does get better as the narration goes on but occasionally it sneaks back on and kicks me in the ear.
The story was interesting as a setup for further tales but I did feel it meanders a little too much to truly be gripping; in fact I caught myself having drifted off for a chapter or two on more than one occasion and having to skip back and relisten.
It's not great, not as good as the first book but I got through it and have hope for the next in the series.

I believe Alaster Stone is going to be my 3rd love after Harry Dresden and Alex Verus.

I don't understand why folks were saying it was anticlimactic. So not true. I love the 2 new additions to the crew.

Book 2 is Better than Book 1

Much better supporting characters and better back story for Stone. This book was way better than the first. I almost stopped after 1 but I’m glad I didn’t. Now I’m excited for Book 3!

Interesting but I would have preferred if the protagonist, Alastair Stone played a more important part. Stone's character should be more dynamic. He is too laid back IMO. The plot is good enough to continue to the next book. Will M Watt narrate well with easy enough to differentiate the characters.

Excellent start to a new epic.

Great story for a new follow on for the adventures of Allistair Stone. Good read!

another great book by R.L.King. story line great, character build up great, and the performer did a very good job.

Would you consider the audio edition of The Forgotten to be better than the print version?

When you have a two hour commute, it seriously cuts into your reading tie, but with the audio version available - its the best of both worrlds

What was one of the most memorable moments of The Forgotten?

For me, the most memorable moments are when you think you know what's going on and you find out your wrong - without giving anything away - it's hard, but stay tuned for the climax, it's a doozy.

What about Will M. Watt’s performance did you like?

Will does an excellent job with the different voices in the story, no mean feat when you add accents into the mix.

A delightful read in any from

I had been waiting to see if it could fulfill the promise of the first one, well it could not. The Alister Stone portrayed in this book is only marginally more involved with being a mage. He does not have the charismatic personality or an interesting supporting cast. I still feel that Alister is at the same cross road he was in the last book, to be an academic or mage.

I did not feel connected to the story. The author has not sufficiently build the paranormal world even when it was being laid out to Jason. Heck, when Jason and Alister are getting to know each other, Alister’s his favorite word is “interesting”. My god, get a thesaurus!
The story reads more like a mystery, rather than a urban paranormal story. I found it slow and long. I need more action than a shield to keep me interested.