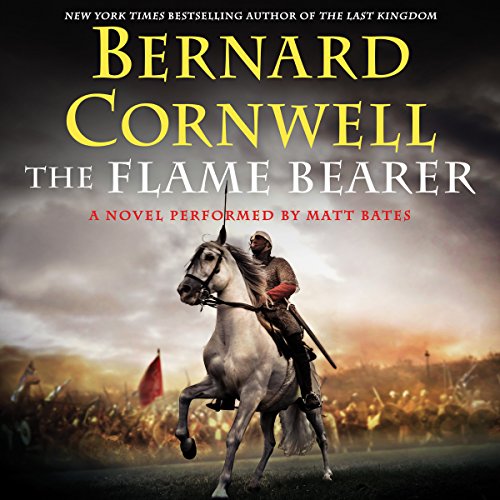 The next installment of Bernard Cornwell's best-selling series chronicling the epic saga of the making of England, "like Game of Thrones, but real" (Observer, London) - the basis for The Last Kingdom, the hit television series coming to Netflix in fall 2016.

From the day it was stolen from me, I dreamed of recapturing Bebbanburg. The great fort had been built on a rock that was almost an island. It was massive; it could be approached only on land by a single narrow track; and it was mine.

Britain is in a state of uneasy peace. Northumbria's Viking ruler, Sigtryggr, and Mercia's Saxon queen, Aethelflaed, have agreed to a truce. And so England's greatest warrior, Uhtred of Bebbanburg, at last has the chance to take back the home his traitorous uncle stole from him so many years ago - and which his scheming cousin still occupies.

But fate is inexorable, and the enemies Uhtred has made and the oaths he has sworn combine to distract him from his dream of recapturing Bebbanburg. New enemies enter into the fight for England's kingdoms: the redoubtable Constantin of Scotland seizes an opportunity for conquest and leads his armies south. Britain's precarious peace threatens to turn into a war of annihilation.

But Uhtred is determined that nothing, neither the new enemies nor the old foes who combine against him, will keep him from his birthright. He is the Lord of Bebbanburg, but he will need all the skills he has learned in a lifetime of war to make his dream come true. The latest chapter in Bernard Cornwell's "violent, absorbing historical saga", The Flame Bearer confirms Bernard Cornwell's title as "perhaps the greatest writer of historical adventure novels today" (Washington Post).

I miss Jonathan Keeble's narration. Doesn't seem the same. But story isn't bad for an ending.

Please tell me it's not over. I could read all of them over three times a year and they never get old. Please just one more book.

I have been following the story of Uhtred of Babbenberg since the first book in the Saxon Stories. In this book Uhtred achieves his goal he has had since book one.

The Saxon Chronicles has been a historical fiction series following the story of King Albert the Great of Wessex and his offspring. Unlike the other books in the series, Cornwell does not have to worry about historical accuracy in this book. In this book, he can allow his imagination to run free. Of course, he still stays within the historical parameters of his series. Uhtred recaptures his Babbenberg home, land and titles.

The book is well written and the historical accuracy of the series has been meticulous. Cornwell is the master of historical fiction; he is also the master of the battle scene. His description is packed with detail and emotions. His battle scene is so dramatic he places the reader in the middle of the battle with all the sights and smells. I have enjoyed all the fascinating characters in this series, real and imaginary. I would guess this is the end of Uhtred’s story. But Cornwell does have the rest of English history to tell us about. This was a great series and a fun way to learn English history.

Matt Bates does a good job narrating the story. Bates has narrated this series since book seven. Bates is an actor and audiobook narrator.

The Next Generation is Set

At least one of the top three of this series, Cornwell has found "another gear". Loved this episode in one of the best historical fiction series of all time.

What was one of the most memorable moments of The Flame Bearer?

Æthelstan taking on the older champion at a crucial moment in the attack on Bebbanburg was great drama and, along with Uhtred Junior, the stage is now set for the series to follow another generation towards the unification of England. The next installment will likely start with the death of our beloved Æthelflaed, alas.

Matt Bates can do any accent and does most of them superbly. There is usually a large cast in these books and Bates can rise to the challenge. He is particularly good at subtle inflection changes pertaining to dry humor.

Who was the most memorable character of The Flame Bearer and why?

The rise of Prince AEthelstan begins in this book but for me the best character was the mad Bishop, Ieremias, who was loads of fun. Cornwell will have to find another strong female character to replace AEthelflaed.. perhaps it will be Stiorra, his daughter, but there is room for one or two more strong women characters... be they good or bad!! I hope Hannah pops up again and also the young daughter of AEthelhelm, who will hopefully acquire some depth of character as well as being stunningly beautiful.

Will Uhtred fight in the next big battle, or will the hilt of the sword be handed over to young Uhtred and AEthelstan?

This has been one of the most exciting series I've listened to. Of course you have to accept the bloodshed and the mixing of gods, but, that said, you join with Uhtred in his desires and conquests and worry for him until he somehow pulls out a victory. The spinners (fates) must have enjoyed weaving this life. I cant wait for the next book and hope there is one.

Listen to or read this book

Excellent series, The Flame Bearer fulfilled the excitement and suspense of the entire Saxon Tales Series

I love this series.

The best series in the history of language. I hope Bernard Cornwell keeps it going.

I LOVE all the tales of Utrid . Bernard Cornwall knows how to keep you riveted and knows how to spin a tale! One of my favorites!

I listened to this book in a few days it was so good. love the series and the program

First part is just the same as the last - I don't- 3 to 4 books, butthen it gets suddenly better with a very predictable but long awaited ending.