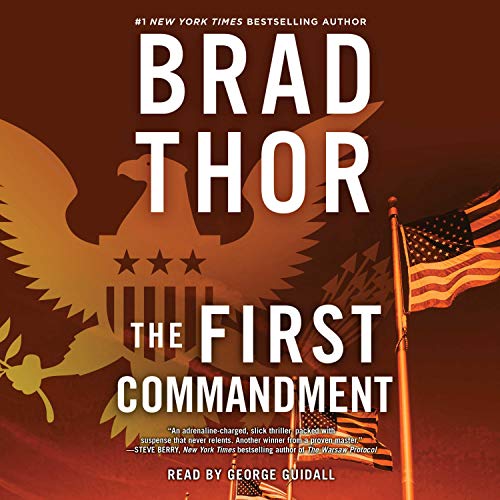 When the president of the United States is blackmailed into releasing five detainees from Guantanamo Bay, a sadistic assassin with a vendetta years in the making is reactivated. Suddenly, the people closest to counterterrorism operative Scot Harvath are being targeted and he realizes that somehow, somewhere he has left the wrong person alive.

With his life plunged into absolute peril, and the president ordering him to stay out of the investigation, Harvath must mount his own covert plan for revenge - and in so doing will uncover shattering revelations about the organizations and the nation he has spent his life serving.

"Fast-paced and action-packed. Sure to please his many fans and gain new ones. Immensely satisfying and highly recommended." ( Library Journal)

With failing eye sight, the audio is the answer and this book is an easy, pleasurable entertainment. Enjoyed the narration, the pace and better continuity than some of his work. Plot is entertaining while unrealistic . . . but then this is fiction. No regret about downloading this one!

I like this book a lot. It kept my interest through the whole book. If you have liked the other Scott H. books you will like this one

Brad Thor has taken his creative writing craft to a new level. He certainly stands out with the likes of Vince Flynn and David Baldacci for creating an edge of the chair novel that is guaranteed to grab you and never let you go. George Guidall provides a terrific narration. I have enjoyed all of Brad Thor's novels to date, but First Commandment is definitely a stand out.

Would you consider the audio edition of The First Commandment to be better than the print version?

Big fan of Brad Thor. This book no different than the others. Fast moving, good story, great naration.

I'm liking them better as time goes on.

I didn't take to Scot in the first book, but the story was entertaining and I gave things a shot. Kept coming back, and I'm enjoying the books a bit more as time goes on. This one felt more like two jammed together tangents than a single coherent book, but still entertaining.

If you could sum up The First Commandment in three words, what would they be?

Seemed like everybody was out to stop Scot, and the way he was able to continue to move about to complete his personal mission without support from the person who owed his life to

This book is non-stop action with a good plot. Vince Flynn readers will enjoy it. A rogue agent trying to take out the bad guys anyway he can. How can you beat that?

Another good thriller with Scot. I am never disappointed with the story's or the ending.

Where does The First Commandment rank among all the audiobooks you’ve listened to so far?

Its just a good fun time. It isn't serious literature, but a good spy novel.

Seriously, George Guidall could read the phone book and I would listen to it. The guys voice is gold!

Loved it from beginning to end. Without ruining it the main plot is much different than were use to seeing.