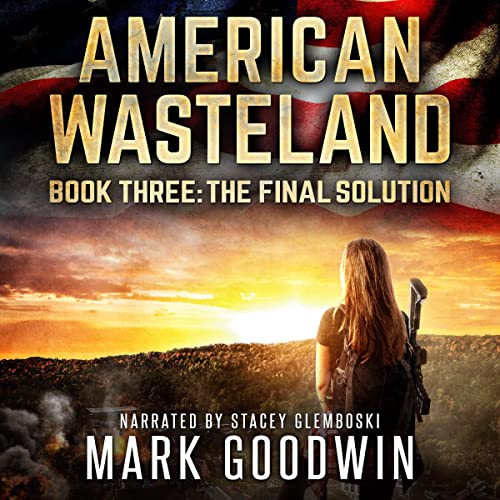 Maintain humanity under 500,000,000 in perpetual balance with nature.

Jennifer Martin’s country lies in ruins—decimated by a civilization collapse weapon designed to depopulate the planet. Those who have survived live in want and oppression.

Jennifer has suffered much since the beginning of the outbreak. She has lost her fiancé and her best friend. But her sacrifice has not been a complete loss. Thanks to what she started, resistance fighters around the country are taking up arms against the rogue federal government. Decentralized cells of the Free American Front are fighting back against the new Federal Emergency Security Agency.

The resistance is little more than a buzzing fly when compared with the strength and might of an empire. Newly promoted FESA administrator Todd Kravitz is eager to stomp out the rebels. Washington has granted him carte blanche to ensure a quick end to the uprising. Kravitz will replace his velvet glove with an iron fist, and he’ll start with Jennifer Martin.

What began as a local skirmish is metastasizing into a full-blown war. If Jennifer’s band of guerrillas are to have any chance of winning, they’ll need to strike a decisive blow against Kravitz and the rest of the tyrants in charge.

Don't miss this post-apocalyptic thrill ride set in America's near future. Get your copy today!

As with all works by Mark Goodwin, this book contains no profanity and no embarrassing sex scenes. However, if you're offended by conservative principles and references to Scripture, this book might not be for you.

Love the author and Stacey Glemboski

Great story and great performance. Makes me want more. I have read (listened) to all of Mark’s books.

For the first time I only listened because I couldn't return it. This book fizzled at the end.

A great preparedness thriller that will hit too close to today's headlines. I enjoyed ever moment of this book and the whole series.

Another Outstanding Book by Mark Goodwin

Mark Goodwin skillfully interweaves Christianity, survivalism, and current events in an engaging, entertaining manner to conclude this series. A must read (or listen to)!

The war for freedom reaches it's vortex as Stacey Glemboski's calming voice reads. It's time for people to step up, show up, show out or sit out. "Freedom isn't free" is probably the most constant message, second only to YAHUAH will do what HE will do, getting the victory in spite of our numbers. So glad 1Sam14 part of the texts. Great ending to an intense series.

This was such a great series! Mark Goodwin never disappoints. Fantastic story lines and character development. Helpful prepping tips and so many ways that this nation is on the brink of collapsing. Read all the of the Mark Goodwin collection.

I’ve listened to every book series by this author. Loved them all. This one was just OK and this final book was short, slow and non eventful. Don’t waste your credit wait for the three to come out as a series for one credit.

So close to non fiction

I’ve listened to every one of Goodwin’s series. Each of his series deals with a different scenario which sparks the collapse of America, this one happened to coincide with current events that happed to come within a hair of making this series a non fiction title. As with all of his books, this one is based solely on Christian doctrine and we follow the characters while they navigate the tribulations of a society in collapse and the inner battle of walking in righteousness.
The final solution embodies what could be possible with the strength and perseverance of men and women of faith. A good closure to a good series.

Not bad, but perhaps not as good as some of Goodwin’s other works. It was a little slow - maybe. Perhaps Seven Cows Ugly and Gaunt is just so good that I’m spoiled. Not a waste of a credit, though …

This was a wonderful series and, in my opinion, each book was better than the last. Helps you see parallels between what’s happening in our world via a well written story. For parents, you find a lot of post-apocalyptic books have excess gore and vulgar scenarios (sometimes plying out in too much detail) but not in this series. Besides the Bible versus‘s between chapters (that apply to information within the book) and good clean writing style, I would have no reservations with my kids listening to these. This is also not a “how-to” book that you can find in some books. It doesn’t turn into a DIY lesson, which I have also run across from other authors. Great read. Please keep writing. Lastly, narrator does a good job telling the story and did pretty good keeping the different character voice fluctuations going in the story.