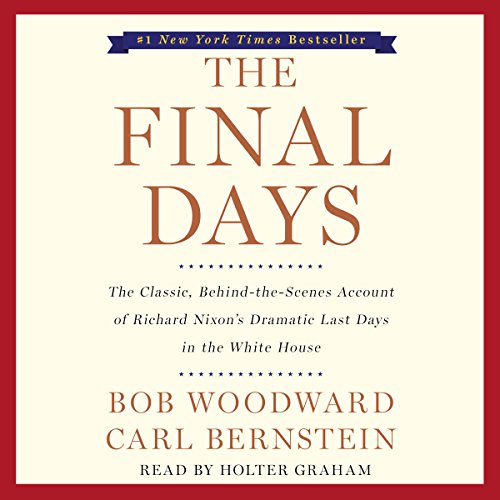 The Final Days is the number-one New York Times best-selling, classic, behind-the-scenes account of Richard Nixon's dramatic last months as president. Moment by moment, Bernstein and Woodward portray the taut, post-Watergate White House as Nixon, his family, his staff, and many members of Congress strained desperately to prevent his inevitable resignation. This brilliant book reveals the ordeal of Nixon's fall from office - one of the gravest crises in presidential history.

One of American History Great Must Reads

I read this book when it was first published when I was in high school. I was a young Nixon hater and laughed at his demise and humiliation. As a more mature professor of history I find myself profoundly moved by this inside account. I don’t like Nixon any more now, in fact I have a much greater understanding of his guilt and shabbiness. However I have a greater appreciation and sympathy for the flaws in the man. This book reads like a Greek tragedy. I certainly find Nixon to be a much more sympathetic character than the present occupant.
Holster Graham is excellent.

For fans of legally-fraught, political decision-making history, at a meticulous fine grain of fly-on-the-wall detail, this book is top-rank. I feel as if I was at the elbow of many elite decision-makers, and a few flounderers (lawyers among them), if not inside their minds. And this goes on almost minute by minute. Some folks would find this excruciating. I like it. Obviously dozens of central figures were interviewed at great length. The most interesting character, to my mind, was Alexander Haig as White House Chief of Staff. That was, to use an old football expression Nixon might appreciate, some fancy broken-field running, on Haig's part. He was basically keeping the show running in near-impossible conditions, with all sorts of complex personalities nearly flying off the handle every minute. That this whole unprecedented mess went with any smoothness at all (to an outside viewer) and with our legendary USA political continuity, we owe in no small part to Haig. Surely we do not owe this, at least per this account, to Richard Nixon, that old poker-player, who played his cards (and especially the crucial White House tapes) so close to his vest. Even his own lawyers were in the dark and thus being hung out to spin in the public relations winds for the sake of his own schemes of self-preservation, until absurdly late moments. Many times Nixon's staff would stand up to withering press fire and pressure from Congress and the Special Prosecutor, only to find their public assertions (based on the boss's claims) proven false. This tended to tie ethics-conscious lawyers into knots, and the authors didn't miss this aspect. In other words, Nixon seemed ready to throw any loyal personnel under the bus to preserve his own hide, when there seemed to him any sliver of possibility he might yet slither away clean, even when this perception was beyond absurd (e.g., in the face of a unanimous Supreme Court against him), given what he (and only he) knew at each moment. At the end his self-involvement seemed to blot out everything and everyone around him, though he finally settled down and gave a few good parting speeches. (Thanks to Ray Price for that.) I have great admiration for "the good Nixon," but this was the worst portrayal of "the bad Nixon" I've seen anywhere. And I've looked under a lot of rocks.
The only improvement I could imagine to this account, might be another editing pass that would make it a bit more sprightly in pacing and prose, maybe with a little more political history context sprinkled across it. Moments here actually seem gruelling, though it was plenty worth it.

I had read this a number of years ago but decided that it was worth revisiting. It’s amazing - chilling - to see the parallels between 1973/4 and today. As others have noted, this account makes you the “fly on the wall” throughout many historic moments that culminated in the resignation of a president.

I have just finished listening to all the presidents men, and I am in the middle of this novel. In the previous novel's review I wrote, I stated that there are so many similarities between Nixon, and trump. That said, I will pose this question to those of you that read this. Do you think that these final days of Nixon's echo Trump's final days if he is impeached, and jettisoned from office? And yes, another question, Is Trump pardoned just like Nixon?

This was one of the longer books I have read, and I have sometimes struggled to finish them, finding it hard to pick them back up once set down. I struggled with this book too. But the struggle this time was to set it down. Time for lunch. No, maybe just one more chapter. Dinner? Let's order. I'll just read till it gets here. Is it really after midnight..... This was an exceptional and deep look into the events that led so easily, so seductively to the edge and the man who stood there, the abyss at his feet, wondering how did I get here. In our current times, it serves as an eerily prescient warning to those who stand today at that same precipice. Nixon stepped back from that edge, capable and moral men there to help avert the worst. Who now, I wonder, remains to pull us back from the abyss this time? I am very glad to have read this book. Thank you.

A book for our time.

I decided to read this book as an escape from what is happening in Washington today. It tells in great detail what went on in the White House during the last two years of the Nixon administration, as the Watergate scandal tightened its grip on the nation and Nixon eventually resigned his office.

But it wasn't really an escape. The parallels between President Richard Nixon and our Current Occupant are amazing: their arrogance, disregard for the rule of law, and certainty that lies could be covered up and not discovered. What I take away is sadness that there was once a time where even a bad president would, in the end, succumb to truth, justice and constitutional requirements. I fear that is no longer the case.

What really happened during and after watergate

The life of a complex man who was the 37th president. Instead of making Nixon out to be some extremely evil villain the authors show the truth of how it went down. They show how something as small as a break in brought down the most powerful man in the world. In a way this book also humanize Richard Nixon a complex man who lived in a complex time and kept the company of some very bad people. A must read for any US history fan or any political fan expertly written and produced.

all the president's men part 2

after decades of postponing this book i can say i'm glad i read it, but not as much fun as all the president's men. i hoped for more salacious details of nixon talking to statues, but was worth it for the obvious comparisons to trump. i hope we are in for another happy ending. i don't see how anyone can read the final days without acknowledging that he had to go.

Another classic from Woodward and Bernstein

this is a masterful, historical account of a tumultuous time in America. The authors have represented it well.

Narrow and claustrophobi—orobably like the White House experience at the time.

Too much of Nixon’s fishbowl, no covrage of the hearings or what was happening in the US outside the White House.

If you read "All the President's men" - this book covers the Events after ist end and the period leading to Nixon's final days. However, it is written from another perspective.