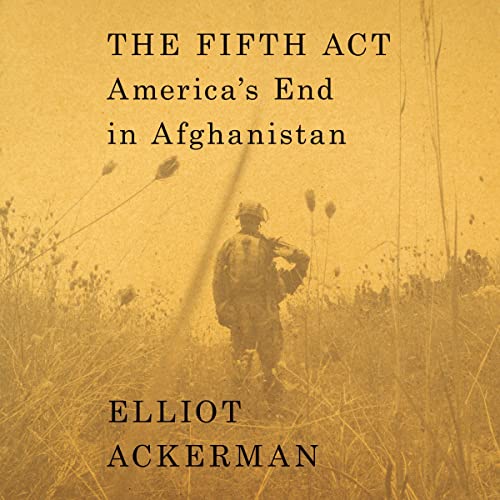 A powerful and revelatory eyewitness account of the American collapse in Afghanistan, its desperate endgame, and the war’s echoing legacy

Elliot Ackerman left the American military ten years ago, but his time in Afghanistan and Iraq with the Marines and later as a CIA paramilitary officer marked him indelibly. When the Taliban began to close in on Kabul in August 2021 and the Afghan regime began its death spiral, he found himself pulled back into the conflict. Afghan nationals who had worked closely with the American military and intelligence communities for years now faced brutal reprisal and sought frantically to flee the country with their families. The official US government evacuation effort was a bureaucratic failure that led to a humanitarian catastrophe. With former colleagues and friends protecting the airport in Kabul, Ackerman joined an impromptu effort by a group of journalists and other veterans to arrange flights and negotiate with both Taliban and American forces to secure the safe evacuation of hundreds. These were desperate measures taken during a desperate end to America's longest war. For Ackerman, it also became a chance to reconcile his past with his present.

The Fifth Act is an astonishing human document that brings the weight of twenty years of war to bear on a single week, the week the war ended. Using the dramatic rescue efforts in Kabul as his lattice, Ackerman weaves a personal history of the war's long progression, beginning with the initial invasion in the months after 9/11. It is a play in five acts, the fifth act being the story’s tragic denouement, a prelude to Afghanistan's dark future. Any listener who wants to understand what went wrong with the war’s trajectory will find a trenchant account here. But The Fifth Act also brings listeners into close contact with a remarkable group of characters, American and Afghan, who fought the war with courage and dedication, and at great personal cost. Ackerman's story is a first draft of history that feels like a timeless classic.

“Making sense of chaos is never easy, but this powerful book does much to explain why America’s debacle in Afghanistan ended the way it did . . . Courage and folly, dedication and tragedy: Ackerman deftly captures all dimensions of a protracted foreign policy failure . . . A must-read account of the end of America’s longest war.”—Kirkus (starred review)

A painful but necessary read

AFG and Iraq Marine vet juxtaposes his personal memoir on the chaotic US evacuation from Kabul. Even if you opposed this war, you should understand the effect of our wars of choice have had on a generation of Americans. The personal sacrifices and subsequent cost were just as significant in these wars as others. He provides ample evidence as to why all wars need to be declared, specifically funded through a war tax, and why a national draft is necessary to get and keep the American people’s attention. Author’s narrative style brought more realism to his story. As a retired Marine, I’m proud of what he’s done here in introducing his friends to us and sharing his personal struggle. Semper Fi

Elliot doesn't miss. Glad he decided to narrate this book too. Not one to typically review audiobooks but felt the need to leave some feedback. thank you, I will recommend this and Places and Names to my friends and family.

A Story told by the only one who could tell it

As an active duty service member, this story is one I looked forward to listening to, because it's a story the world needs to hear. Because I'm still active duty, I must be a-political, but my heart broke the day we withdrew from Afghanistan. not because we"finally" did it, but rather, in the manner we did it, after twenty years of combat within its walls leaving behind families who supported our people to ultimately die at the hands of the Taliban. Elliot is a storyteller who displayed vulnerability while still being the utmost warrior I know him to be. This is a must read. Hopefully we will never repeat these events, but knowing the human race, it is inevitable.

I enjoyed this story immensely. Elliot is a very gifted writer and an engaging speaker. I know him personally but that doesn’t make any difference. It is a very well written book!

Wow. Gripping, compelling, heartbreaking, tragic, inspiring. This story should be required reading for every American. Word of warning though... If you are already cynical about our leaders in Washington this book will not help...

A need to understand

Mr. Ackerman tells it like he sees it with truth and depth. It brings Afghanistan to your door step.

Excellent storytelling of a unique perspective during a very disappointing time in United States history.

Should be mandatory in all classrooms

Excellent narrative that everyone should read. I look forward to more books by this author.

It covers a wide gambit of events of the past couple years. This also covers leadership topics.