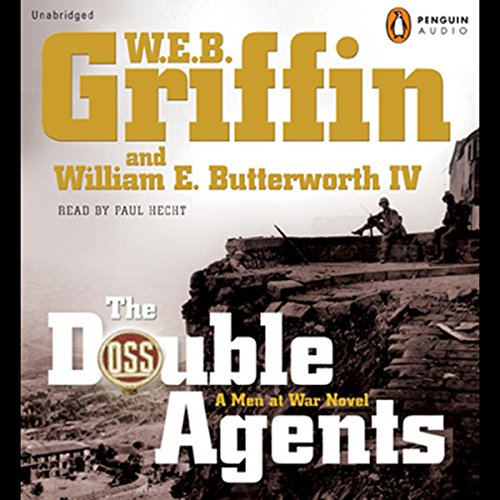 Critics and fans alike welcomed the return of the "shrewd, sharp, rousing" (Kirkus Reviews) Men at War series: "The Saboteurs is good entertainment and the fast-paced and exciting novel Griffin’s readers have come to expect. This is Griffin’s 36th novel and his son’s first; one wonders how prolific a force Griffin & Son will be!” (Library Journal)

Now, Dick Canidy and colleagues in the Office of Strategic Services face an even greater task - to convince Hitler and the Axis powers that the invasion of the European continent will take place anywhere but on the beaches of Nazi-occupied France. "Wild Bill" Donovan’s men have several tactics in mind, but some of the people they must use are not the most reliable - are, in fact, most likely spying for both sides - so the deceptions require layer upon layer of intrigue, and all it will take is one slip to send the whole thing tumbling down like a house of cards. Are the OSS agents up to it? They certainly think so.

And then the body is found floating off the coast of Spain....

Filled to the brim with action, character, and the deep understanding of the military heart and mind that have made Griffin’s books so outstanding, The Double Agents is irresistible storyteller from a master of the craft.

OK A SPy Novel it ain't

Having read the reviews I must agree that this is not your typcial spy novel. It probably wouldn't take more than half an hour to tell the plot of the story without missing out on anz of the facts. However, the fun for me lay exactly in the languid pace. This is NOT a fast pace spy thriller but rather a very slow description of spy work during the war. And as we should know by now spying is 95% boring preparation for 5% thrilling action. WEB gives the 95% a human face and paints a facinating picture of the characters.

I have read most of W.E.B. Griffin's books.This book is not his. He might have created the outline and created the characters but the prose is by Butterworth the too many. It reads and listens like buttermilk. Don't waste your time or money and if you have, ask for a refund. A good nap would be better.

Not the Best in the Series

I have read everything ever written by W.E.B. Griffin. I started this series when it was originally published under the pen name Alex Baldwin. I say that to let you know that I am invested in these characters and their stories. This effort was a dissapointment. It lacked the usual action and suspense. The characters seemed shallow and uninspiring. The narrator had difficulty with the military titles and could never keep straight the difference between a lieutenant and a lieutenant commander. If this is your introduction to this series try another book. The Saboteurs was fun. If you have been reading the series all the way through, prepare to be dissapointed.

I am a big fan of this author, but this unabridged version was one of those stories where I was just waiting for the good stuff to take place (some action). However it never came to pass as I was expecting. The author went into great detail about how the central character was feeling and the operation in england but when the end results came it was over before it started with little detail. Then the book ended and I was confused, I thought there should have been another few chapters of the book to have some closure. Instead I felt as if it was a sequel. If this is going to be your first W.E.B. book please choose another and wait until you're a fan for this one.

I disagree with most of the reviews I have read about this book. I have really enjoyed the whole thing. To me it is interesting how the author weaves all the different characters into a triller of a story.
Peter B.

I was really looking forward to a good read about operation mincemeat but I was sorely dissapointed. There are a lot of characters in the book and it's sometimes hard to remembre who is who. The story line is not very interesting and if memory serves me correctly it was not completely historically accurate.

Drags On and ON

One of my favorite Authors but the advancement of this saga could have been written in 30 pages. Lot's of filler.

THIS MAY BE THE WORST AUDIOBOOK I EVER LISTENED TO. THE EXAGERATED AMOUNT OF TIME TO UNIMPORTANT DETAIL IN THIS BOOK IS MIND BOGGLING. I LOVED OTHER BOOKS OF WEBG BUT THIS IS TERRIBLE

I Love the Griffin books have read and listened to dozens first time I was disappointed. And this reader was boring.

Enjoyable entrainment worth a listen.

I have just listened to Paul Hecht give a great performance of Double Agents a book by W.E.B. Griffin.