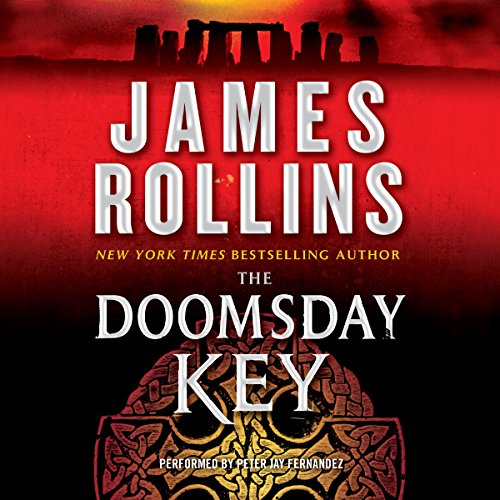 At Princeton University, a famed geneticist dies inside a biohazard lab. In Rome, a Vatican archaeologist is found dead in St. Peter's Basilica. In Africa, a U.S. senator's son is slain outside a Red Cross camp. The three murders on three continents bear a horrifying connection: all the victims are marked by a Druidic pagan cross burned into their flesh.

The bizarre murders thrust Commander Gray Pierce and Sigma Force into a race against time to solve a riddle going back centuries and to a ghastly crime against humanity hidden within a cryptic medieval codex.

Aided by two women from his past, one his ex-lover, the other his new partner, Gray must piece together the horrifying truth. But the revelations come at a high cost, and to save the future, Gray will have to sacrifice one of the women at his side.

That alone might not be enough, as the true path to salvation is revealed in a dark prophecy of doom. The ultimate nightmare is locked within a talisman buried by a dead saint, an ancient artifact known as the Doomsday Key.

The telling and the story are well worth it! An adventure with a twist, ok a couple of twists and turns

The plot is a bit implausible. The characters are always escaping the unescapeable. One crazy escape, okay, but over and over?? Plus, the reader was terrible. No drama, no expression. Read it instead. The writing was relatively good, but the reader ruined it.

I wasn't sure what I was going to get into with this one and was pleasantly surprised. For a story based on pre-history up to the present it was really interesting and suspensful. This may not be for everyone but I enjoyed it. I mainly prefer espionage novels but would like to see-hear more of this.

I've been following this author for the last few years. I like his current events tie-ins, quick paced action, and fun characters. Reading his books reminds me of some of my first adventures in reading as a child with the Hardy Boys and Nancy Drew book; a cliff hanger ending in every chapter. If you like over the top adventure, suspense, and diabolical enemies this is the book for you.

Another great story from James Rollins. Great character development, nice twists, compelling plot and subplots. I really enjoyed this one.

Like Indiana Jones these stories are a romp on the wildside with great characters doing incredible things...yet through character development and a fast paced storyline you believe in their adventures...and are always routing for the good guy. The weaving of religion, science, technology, history and friendship is always a fine creation by Rollins and Doomsday Key is no different. Narrator was spot on and made the book come alive!

Although Rollins books don't have to be read in order it is beneficial to read them in order because you understand the characters and their sub plots. This series focuses on a secret goverment team called the Sigma Force. Each book describes a different "mission" they are enlisted in. The books cover a short period of time...like 48 to 72 hours of the mission which usually takes place in several locations. The next book can be 6 months or a year later. It is a fun and energetic read!

Please stop playing music between chapters and during narration!!

I love the Rollins Sigma series, the Narrator is easy to listen to and does a fine job. What I hate with a passion is the horrible and ridiculous music played between chapters and sometimes even during the narration. Its just awful to listen to and I dread it each time I start a new book.

Not a page turner, but still good

I think this book would get 4 stars as a regular read, but only 3 as an audio book because of the repetitiveness. I may have skimmed over some of the repeated detail if I read it, but you can't really skim on an audiobook, so it got a little annoying when the author would recap everything that had already happened every two hours or so. That said, the narrator was excellent, and I liked the bones of the story. Perhaps the abridged version would be better.

I really enjoyed how possible all the terrible outcomes are - the book touches on a lot of current topics: bee colony collapse, genetically modified food, world over-population, etc., that were interesting and scary at the same time because of their factual nature. Also, anything having to do with ancient stone circles is fun. But I HATED how many ancient treasures get ruined in the course of the book.

This was my first James Rollins book, and I'll probably read some of the earlier Sigma Force books. I certainly appreciate the level of detail and research that clearly went into this book. Overall, thumbs up.

How many times can they escape?

So sorry to write such a scathing review, because I had high hopes for a fun adventure novel. However, this book is just one long string of escapes from impossible situations. Again and again we find the three groups of heros or main characters in a death-defying run from the bad guys. This wouldn't be so bad if the escape sequences actually built something into the story line, but most don't. Couple this with the unbelievable appearance of sat phones, cell phone boosters, laptops with secret files just sitting on a desk in the middle of a firefight, and polar bears that attack and defeat an army of bad guys on snowmobiles... Well, you get the picture.
If you can suspend all rational belief and just want an adrenaline rush without the need to engage your brain, this is a fine read. Otherwise, it just gets tedious. Check out Follet's Pillars of the Earth or Wilbur Smith's African sagas for a much more engaging read.

My wife and I listened to this book together and we finally gave up about 3/4 way through. The characters were uninteresting and the plot was mired in discussions of genetically modified food sources and how they can be harmful. The writing style was very weak with numerous repetitions, which should have been caught by the editor, and the dialogue was not authentic-sounding. If the author were a seamstress, you could say that this book was so poorly done that all the seams were showing and the fabric was of poor quality.

I have read hundreds of thrillers and this could be the worst ever. It has absolutely nothing going for it. Do not waste your money.