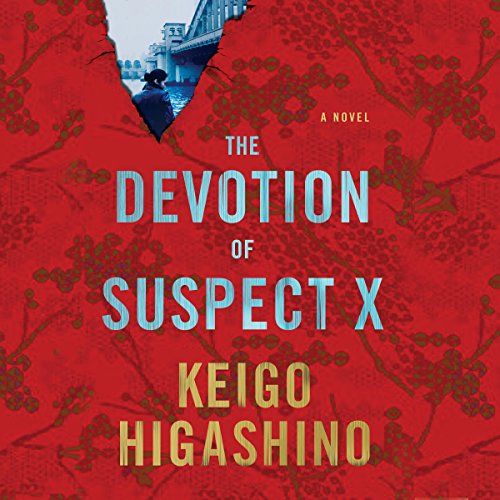 The Devotion of Suspect X

On one level, The Devotion of Suspect X channels the vogue for offbeat psychological thrillers: a cerebral criminal, a physicist who moonlights as detective, lengthy mathematical discursions, all framed by a prose style that is as cool as a blade’s surface. But behind this is an essentially conventional tale of obsessive love and loneliness, and it’s this which drives the narrative onwards  the quasi-intellectual trappings don’t quite mesh with the narrative to make an organic whole. Even a significant twist towards the end doesn’t fundamentally alter how we perceive the preceding events. Columbo-like, we know the identity of the guilty party from the start: the pleasure of the story is in seeing if and how they deal with their consciences and the police investigation.

The excellent David Pittu works hard at extracting every nuance, shade, and layer from the serviceable text. He seems to be able to anticipate the listener's own imaginative perception  just where you'd imagine a tremor in the voice, or something spoken through gritted teeth, or with a sigh, he delivers just that, and right on time. It's uncanny. Where he comes up short is his performance of Yasuko, the single mother victimized by her ex-husband. Pittu portrays her with a tongue-tied gentleness, all downcast eyes and suppressed sighs; this sorrowful passivity in such a central character grates, becoming a reductive reminder of her victim status. But its author Higashino who must take the blame for this; Yasuko is a former nightclub hostess, which opens up all kinds of character possibilities and tensions that just aren't present here. Her relationship with her teen daughter is vitally important to the plot, but the daughter herself gets short shrift until a dramatic development only serves to underscore her absence from the book's main narrative.

Another cipher is Dr. Yukawa, the physicist who is called in to offer gnomish words of wisdom in some kind of consultancy capacity. He’s the star of a series of books published in Japan, and it’s a testament to the underlying efficiency and dramatic pull of the core story here that, despite the limited ambitions of this particular outing, listeners will certainly want to hear more from this potentially gripping franchise. Dafydd Phillips

Yasuko Hanaoka is a divorced, single mother who thought she had finally escaped her abusive ex-husband Togashi. When he shows up one day to extort money from her, threatening both her and her teenaged daughter Misato, the situation quickly escalates into violence and Togashi ends up dead on her apartment floor. Overhearing the commotion, Yasuko’s next door neighbor, middle-aged high school mathematics teacher Ishigami, offers his help, disposing not only of the body but plotting the cover-up step-by-step. When the body turns up and is identified, Detective Kusanagi draws the case and Yasuko comes under suspicion. Kusanagi is unable to find any obvious holes in Yasuko’s manufactured alibi and yet is still sure that there’s something wrong. Kusanagi brings in Dr. Manabu Yukawa, a physicist and college friend who frequently consults with the police. Yukawa, known to the police by the nickname Professor Galileo, went to college with Ishigami. After meeting up with him again, Yukawa is convinced that Ishigami had something to do with the murder. What ensues is a high level battle of wits, as Ishigami tries to protect Yasuko by outmaneuvering and outthinking Yukawa, who faces his most clever and determined opponent yet.

There is an old saying about a friend will help you move, but a real friend will help you move a body. This is an above average story exploring the latter. A lonely math nerd comes to the aid of a single mother and her teenage daughter. The story pulls you along, forcing you to compete with the characters as they practice their deception or those seeking the truth. I spent the first few chapters (if not half the story) trying to decide which character was my hero only to conclude each had their own integrity, values and redeeming qualities. This is not your typical crime mystery - it's so much more. I greatly enjoyed it and hope you do too.

This seemed to me more akin to PD James ---more a psychological why-dunnit and how-dunnit than a who-dunnit, more about the character and plot than action, but (at least in translation) the novel does not have James' tight prose. It's about the personal more than the political, even if the central event does highlight domestic abuse. Glimpses of Japanese society add interest. Happily it's not another cookie cutter ???edge of seat??? violent thriller. Neither is the psychology too dark. I found the narration good but not outstanding.

It's an original mystery for fans of global gumshoes (and this time the shoe is on the other foot). Well worth a listen.

P vs. NP (In the library with a candlestick)

In a Tokyo apartment, a man lies dead at the hands of his ex-wife and step daughter. Their neighbor, an introverted mathematician and virtual stranger, offers to help hide their involvement in the death. He then orchestrates an intricate cover-up to safeguard the child and her mother.

As the Tokyo police begin a murder investigation, a brilliant physicist - who has consulted for the police in previous cases – is brought into the mix. When the physicist learns that the neighbor of the suspect is, in fact, his old college friend, his interest is piqued. He begins to investigate independently.

And so we reach the central players of our chess game; two brilliant old friends, the mathematician, and the physicist. One believes he has created the perfect puzzle – the other is determined to solve it. Pitted against each other in this classic game of cat and mouse, both men struggle to fulfill their perceived “duties”, despite the feelings of friendship and respect they both feel for the other.

The Devotion of Suspect X is a rare jewel of the mystery genre; one often sought, but rarely found. It’s a mystery crafted out of many character’s points of view, and even more layers of reality. If you want answers, you’ll have to wait until the end; because like all great mysteries, the truth waits until the final unveiling.

For this particular selection, I have to thank fellow reader Howard (a great member to follow for fantastic reviews) for bringing this novel to my attention.

Intellectually and emotionally, the story works at the highest levels. I felt stunned and moved by the final scene. I hope to see more from this author on audible. Preferably with the same reader.

I can understand why this won an award in Japan. The story is very much of that culture. I enjoyed it tremendously, even though the ending was not a happy one. Very character driven, this story is engrossing.

Can the Human Heart Be Pragmatic?

If Rene Descartes wrote a modern-day murder mystery it would probably read something like this. But, while Descartes had a lifetime to prove his mathematic and philosophical theories, time is ticking down for brilliant mathematician Suspect X...and there are some variables he cannot guarantee.

For me, this one fell into the category of *Pleasant Surprises*. It languished in my library while I read and listened to books that were supposed to be blockbusters. In hindsight, it would have been a better use of time than listening to that big "first novel for adults" from a famous author. Devotion of Suspect X is a well-written, original concept that defies even the best of the armchair gumshoes' abilities; it demands your interest, then keeps your mind spinning for days after you've finished. Not only does it leave you trying to re-trace some of the events, look for what you missed, it also leaves you pondering the capacity of human nature and determination--*quantifying and qualifying*.
"Sometimes a person just needs to exist to be someone's personal savior."

The narrator read each character in the same manner; being unfamiliar with Japanese names (or ignorance of), I was pulled a little out of the story at times determining which character was speaking until I got with the flow. Nothing I would fault the author or narrator with--just a note to pay attention closely if you have a tendancy to listen only halfway (sometimes) while you multi-task. This is one of those stories that picks up speed, then really picks up speed. If it were a movie, it would build to an unsuspected climax -- and the screen would abruptly go black. Powerful and surprising.

A friend recently told me she considers a movie "award worthy" when it transport her from one place to another, not only in revealing life in a different location, but also "transporting" her to a different view point. This book did both! It is set in modern day Japan, which was a revealation! Call me naive, but I didn't imagine Japan had a homeless problem... Don't stop reading! This book is not a commentary on homelessnes, or any kind of social issue. It is a great murder mystery, but you know who the murderer is from the very beginning. Twists and turns that caught me by surprise. The only thing I didn't like was the ending, but the fact that I didn't like the ending is probably a commentary on my morals...

You'll walk a marathon to keep reading this book

What a wonderful first experience of Keigo Higashino! This is a terrific mystery that starts with great excitement and never lets up. I found the characters endlessly interesting and three-dimensional, especially our math teacher.

The best kinds of mysteries are ones where the truths are in plain site...we're just too myopic to see them.

If you're not familiar with Japanese names, and I'm not, you may have to stop everyone in a while to remind yourself who is who, but don't let that get in the way of your enjoyment. I now feel bereft....I finished the book!

This isn't a whodunnit, because the murder is clear in the first part of the book - we know where, when, why, and (yes) who did it. The only question that remains is if, when, and how will the aftermath play out.

The novel is ultimately focused on whether it it more difficult to create an unsolvable problem, or to solve that problem. And if you can understand and ponder the philosophy in that, then you can get to the heart of this story, where the main characters are a mathematician, and physics professor, and a police detective - all alumni of the same university in the same year, and all brought together by the murder of a greedy and abusive man by his frightened ex-wife.

It's also about friendship, unrequited love, devotion (to people and philosophies), and morality. Sadly, though it has thoughtfulness and intelligence, I thought it lacked in character development and emotion. That was not helped by the narrator, who didn't provide sufficiently different voices for the characters, in my opinion, further adding to the lack of characterization and emotion in their voices. It all sounded a bit wooden to me, though that might also have been the fault of the translator - without being able to read (or listen to it) in Japanese, I can't decide which is at fault there.

I chose this because I wanted to try a Japanese murder mystery and it was well reviewed and awarded, but it didn't wow me and I'm not sure I'll try another.

It's disappointing to find so many current mysteries end up not being mysterious at all but rather some deranged serial/psycho killer. This brilliant little piece is original and thoughtful. The dialogue is pitch perfect, the characters, believable. More like this please!