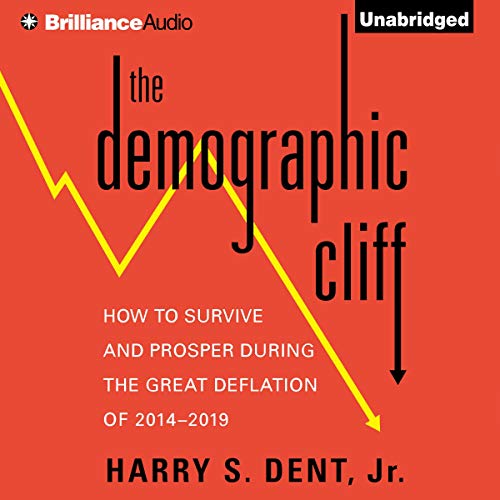 Best-selling author and financial guru Harry Dent shows why we’re facing a "great deflation" after five years of desperate stimulus - and what to do about it now.

Throughout his long career as an economic forecaster, Harry Dent has relied on a not-so-secret weapon: demographics. Studying the predictable things people do as they age is the ultimate tool for understanding trends. For instance, Dent can tell a client exactly when people will spend the most on potato chips. And he can explain why our economy has risen and fallen with the peak spending of generations, and why we now face a growing demographic cliff with the accelerating retirement of the Baby Boomers around the world.

But now, Dent argues, the fundamental demographics have turned against the United States and will hit more countries ahead. Inflation rises when a larger than usual block of younger people enter the workforce, and it wanes when large numbers of older people retire, downsize their homes, and cut their spending. The mass retirement of the Boomers won’t just hold back inflation; it and massive debt deleveraging will actually cause deflation - weakening the economy the most from 2014 into 2019.

Dent shows that if you take the time to understand demographic data, using it to your advantage isn’t all that difficult. By following his suggestions, listeners will be able to find the upside to the downturn and learn how to survive and prosper during the most challenging years ahead.

Yes, because it makes one think about the potential for future change.

Acknowledging that demographic and population level changes just have to have an economic effect.

What does Harry S. Dent, Jr. bring to the story that you wouldn’t experience if you just read the book?

His passion for the topic. Though, to be fair, I bought the audio book to use the two hours of commute each day more equitably than listening to Miley Cyrus screech at me.

What insight do you think you’ll apply from The Demographic Cliff?

I haven't decided yet. Even though I'm almost fifty, I'm just getting off the ground in my 401k. If Dent's prediction of a demographic cliff striking soon comes to fruition, I have plenty of time to capitalize on that downside.

Dent has an image problem. There's a lot of negative press out there about him and his predictions. He mentions Tony Robbins a lot too, who has his own image issues. A lot of people think these guys are, to a greater or lesser extent, snake oil salesmen. I think a more concerted effort should be made by Dent to reasonably talk down his critics; not, I hasten to add, in a negative way, but in a constructive prove-my-pont sort of way.

Outstanding Information -- a must read

In the demographic Cliff, Dent make a reasoned, well supported argument for his predictions. The first third of the book is very slow because he spends a great deal of time convincing you of his solid record in past predictions -- of course they have worked out well or why would he write another book?

That sarcasm aside, he makes a very convincing argument and it dovetails with other books like "The Next 100 years" and Freakonomics. I think this is a must read -- think it over, his argument does make common sense.

Learned alot, but got bored with the same message

I learned a great deal from the book and look at things differently now. But the author and narrator seemed to preach the message over and over. At a certain point I starting tuning out and never finished the book.

The entire book is an exhaustive repetition of the same point. Each proceeding chapter repeats the main topic so often and with such intense detail it leaves you mentally screaming "get to the point already!!"

The good parts and the bad parts

Probably not. The book doesn't fully fulfill its promise in my opinion.

What could Harry S. Dent, Jr. have done to make this a more enjoyable book for you?

To base the numerous conclusions on facts. To avoid proving things using a few examples and rounded up statistics which I guess is also derived from a few examples. In particular the author talks about "cycles" he discovered, however, it's not clear how he discovered those cycles, why he thinks those past examples apply to current situation, and with what certainty.

Have you listened to any of Harry S. Dent, Jr.’s other performances before? How does this one compare?

What did you take away from The Demographic Cliff that you can apply to your work?

The demographic analysis is described very good. I wish the whole book would follow the same style as the parts about nations getting close and falling off the demographic cliff.

I would recommend this book to someone who is interested in understanding the world demographic situation in the context of the recent financial crisis and the coming one. However, the authors conclusions regarding the deflation period after the next crisis are weak, and as it seems to me, even sometimes contradictory.

Interesting to read / hear a well thought thru summary from a interesting statistician... I have 2 graduate degrees in economics & this is a great book!

So far his views have not come to full fruition...This is not to say that there isn't a lot of clear insight and warnings in his views.

Interesting, very enjoyable perspective and insight with the special emphasis on demographics. Regrettably, there is way too much emotion in the narrative and way too few figures. The central thesis that the smaller number of working age adults going forward will put downward pressure on economies and be deflationary. Yet there is absolutely no statistical explanation of this belief. Super repetitive with the thesis argument. I just observe that when people feel so strongly and offer so few statistical and factual underpinnings, it undercuts the argument is being made. But it certainly encourages one to research the arguments and plan for these eventualities.

First it was good, but then he started rambling on and on, repeating what he said and having no structure in information he presents. A lot of emotional opinions then facts and unstructured approach makes this really hard to listen. Approach this book at your own risk,considering that it's scattered and highly emotional. 25% of info is useful. I do not recommend it.

Good info, but needs a PDF with graphics for reference. I would have given it a higher rating if it had the PDF.