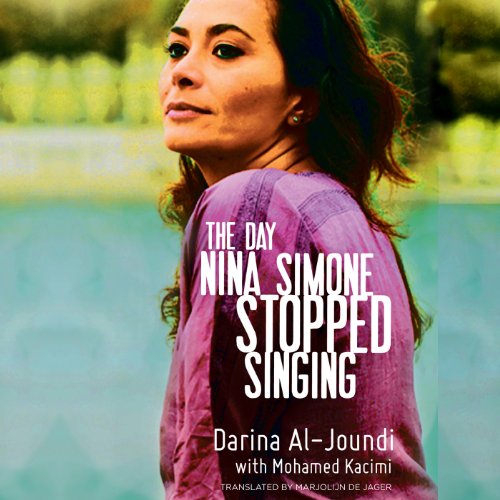 Raised on Charles Baudelaire, A Clockwork Orange, and fine Bordeaux in 1970s Lebanon, Darina Al-Joundi was encouraged by her unconventional father to defy all taboos. As the bombs fell, she lived an adolescence of excess and transgression, defying death in nightclubs. The more oppressive the country became, the more drugs and anonymous sex she had, fueling the resentment by day of the same men who would spend the night with her. As the war dies down, she begins to incur the consequences of her lifestyle. On his deathbed, her father's last wish is for his favorite song, "Sinnerman" by Nina Simone, to be played at his funeral instead of the traditional suras of the Koran. When she does just that, the results are catastrophic.

In this dramatic true story, Darina Al-Joundi is defiantly passionate about living her life as a liberated woman, even if it means leaving everyone and everything behind.

I think the story could never been better written. As a lebanese girl living in france i somehow was put in real situations while listening.

The reading was a little bit fast tho

The author of this book is very proud of how unconventional she is, and thought that would make a great story. I have to wonder who published this book, as it is simply awful, deadly boring. Apparently the author finds her story fascinating, but I'm not sure why anyone else would. Unsettled and confused as a teen in the war-torn Middle East, she turns to partying, drugs, sex. Good gracious. The account is just a dry recitation of the facts; I did this, then I did this, then this happened, then I did that, then I did this.....
Complete disclosure: I did not finish this book. Way, way, way toooooo boring.

When her father died, she sang Nina Simone's "Sinnerman," per his last wish, instead of the suras of the Koran.

This did not go over so well with her surviving family.

Life turned violent. Bombs started falling in Lebanon's civil war, and fundamentalism took over secular communities. The rest of her family weren’t as liberal as her father had been, and Darina was forcibly placed in an insane asylum.

Al-Joundi survived— and wrote this unforgettable memoir in exile in Paris. She is legendary throughtout the Middle East as a performer, and best known in Europe and North America for her hit play by the same title as the book.

Narrated by Lameece Issaq, with complete panache. This is one of my favorite audio productions of the year!

Brought tears to my eyes

Very sad story of how someone can endure such a hard life and overcome such obstacles.

It is a common observation that modern Lebanese literature means autobiographies from the civil war - with a sufficient choice of unusual personalities portrayed therein. Sometimes, this can get boring - which is definitely not the case here.
I would say that this short book takes the cake in the genre. The personalities of father and daughter are so violently unconventional to Lebanese society, and the story is told with such brutal simplicity that, even if only half of the content is true (and if you know Beirut, it's all probable), it's an enchanting story. Darkly enchanting, that is.