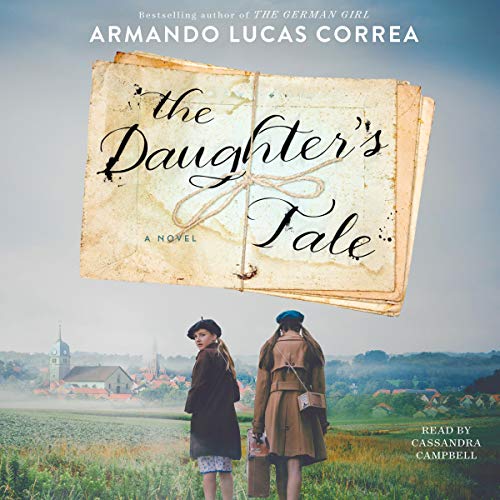 “The Daughter’s Tale is immersive, both heartbreaking and redemptive, steeped in harrowing historical events and heroic acts of compassion that will have you reflecting on the best and worst the human heart has to offer. Fans of WWII history and book clubs will find depth and skillful storytelling here, but on a deeper level, searing questions about life, love, and the choices we make in the most impossible of circumstances.” (Lisa Wingate, bestselling author of Before We Were Yours)

From the internationally bestselling author of The German Girl, an unforgettable family saga exploring a hidden piece of World War II history and the lengths a mother will go to protect her children—perfect for fans of Lilac Girls, We Were the Lucky Ones, and The Alice Network.

BERLIN, 1939. The dreams that Amanda Sternberg and her husband, Julius, had for their daughters are shattered when the Nazis descend on Berlin, burning down their beloved family bookshop and sending Julius to a concentration camp. Desperate to save her children, Amanda flees toward the south of France, where the widow of an old friend of her husband’s has agreed to take her in. Along the way, a refugee ship headed for Cuba offers another chance at escape and there, at the dock, Amanda is forced to make an impossible choice that will haunt her for the rest of her life. Once in Haute-Vienne, her brief respite is interrupted by the arrival of Nazi forces, and Amanda finds herself in a labor camp where she must once again make a heroic sacrifice.

NEW YORK, 2015. Eighty-year-old Elise Duval receives a call from a woman bearing messages from a time and country that she forced herself to forget. A French Catholic who arrived in New York after World War II, Elise is shocked to discover that the letters were from her mother, written in German during the war. Despite Elise’s best efforts to stave off her past, seven decades of secrets begin to unravel.

Based on true events, The Daughter’s Tale chronicles one of the most harrowing atrocities perpetrated by the Nazis during the war. Heartbreaking and immersive, it is a beautifully crafted family saga of love, survival, and redemption.

Beautifully written and so sad. The kind of book that leaves you thinking about how different the fate of the daughters could have been if different choices were made at different times. And it shows how a mother’s love of her children is like nothing else.

This book was amazing. The characters were so richly drawn. The description of all the locations made me feel as though I was in each place. The author has done an excellent job. Her language is beautiful .. so well written. If you like historical fiction or just a great book, this is for you.

Keep your mind on this & don't stop listening. It is not easy to follow in an AUDIO BOOK.. It makes me wish I had the printed version. It has two stories going at once. , so stay alert and it does have a story that is difficult to think of happening.
The detailed descriptions of each scene were wonderful. You could feel the hunger pains, you could hear the pain in the reader's voice.

Casandra Campbell is a wonderful reader, but it seems she had a difficult time keeping the voices sorted out..or just my non ability to understand a French or German accent.

Well written. i learned, once again, how the evil Nazi regime was the epitome of satanic infiltration in this time period.

The narrator is excellent. The prose is very good. The story is one sad tale after the next. Every bad thing that happens in WWII stories is retold once again. Every event is pitiful. The story starts with the main character dying of a heart attack and then reviews her sad life. It ends with her death. I think I have read too many WWII books!

I’ve read many ww2 historical fiction books and this is one of
the best. Still I would love to talk to author with several questions I can’t resolve myself.
Wrightinspectionservice@yahoo.com
One of the best endings. Stay tuned for epilogue also

I found the story line hard to follow at times. I thought I would really enjoy this book, but it was just ok.

Best read in 2019! Highly recommend this book, especially for those who are interested in the WWII time frame!