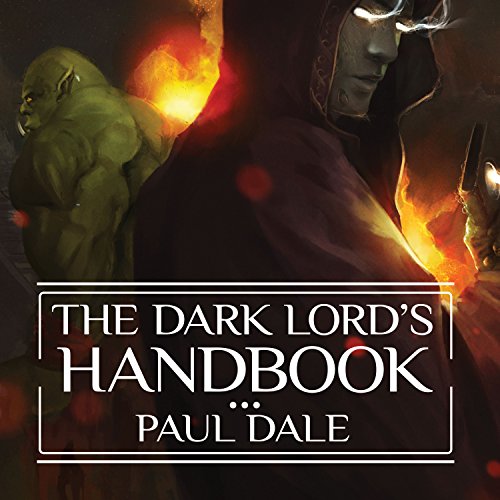 To become a Dark Lord is no easy thing. The simple ambition to hold dominion over the world and bend all to your will sounds straightforward, but it's not. There are armies to raise, fortresses to build, heroes to defeat, and battles to be fought. After many spectacular failures, Evil decided to lend more than inspiration to these would-be tyrants. He wrote an easy-to-follow Dark Lord's Handbook. And yet the next Dark Lord that came along screwed up like all the others. It had been hundreds of years, and the Handbook was lost in the annals of time, along with all that was mythic and exciting in the world. Then one day, a randy dragon had a chance encounter. Nine months later a Dark Lord was born. In time, the Handbook found its way to this new contender: Morden.

It was a fun book and the narrator did a wonderful job with his performance. I am restlessly waiting for the next audiobooks in this series. I hope that I don't have to wait much longer.

Started out good but turned into a drag

Would you try another book from Paul Dale and/or Gildart Jackson?

No, this felt like a cringe worthy attempt at a disc world novel.

What could Paul Dale have done to make this a more enjoyable book for you?

Learn to actually develop characters instead of just talking about how they are suppose to be, and possible add some women who are annoying as hell and actually have more than 1 dimension of being evil/contrary/hot. Also... maybe come up with a more original name for the dragon than the one right out of World of Warcraft? Come on! He even mentions the Black Dragonflight WTF?

Spoke way too slowly and the voice acting as lady deathwing was unbearable, also the accents changed randomly so you can't tell who he is suppose to be.

If you could play editor, what scene or scenes would you have cut from The Dark Lord's Handbook?

The entire middle section about a pointless voyage and a ridiculous war.

In this case, bad guys finish first. No doubt.


This audiobook is great. It's great fun with a great sense of humor and a great narrator with the greatest villain voice ever. As an entertaining experience, this is so satisfying as a whole to listen to that it's almost a perfect package in what it does. Anyone who enjoyed fantasy in even the slightest bit growing up will definitely find something to like here.

Featuring a story that gives credit to all the fantasy villains that never were given the appreciation they are due, follow along with Morden, a young man selected for to be the next dark lord by forces he doesn't understand...and laugh in maniacal glee as he discovers that being a bad guy is a lot harder than it looks. Nothing makes this point clearer than his handy dandy and more than slightly sarcastic  "Dark Lord's Handbook".

Seriously, this book is recommended to listeners who grew up loving fantasy adventures and always wondered was going on with all those wonderfully insane villains who were always trying to take over the world. Paul Dale does a terrific job setting up this story and Gildart Jackson has the perfect dark lord voice if there ever was one.

I usually enjoy a story which does not have a clearly defined antagonist and protagonist. This story was no exception. The idea of a handbook for how to be evil was very tongue in cheek and a great device.

The narrator had an odd cadence in the way he read. His character voices were good and varied to give each character their own life. The way he read the story kept me from becoming too immersed. It almost sounded like he was reading the story as he was writing it. There were elements where that type of narration was perfect, but it was very strange when narrating exposition and dialogue between most of the characters. I think I would have enjoyed the story much more if I had read a hard copy.

I absolutely loved mr Dale's extremely dry and silly humour, it is much like listening to the dialogue of the Black Adder. Using every single fantasy cliche there is and twisting them slightly he manages an enormously entertaining book - and I am eagerly awaiting the two next books of the series as Audible books.

And much of the enjoyment is thanks to the narrator: great voices and humorous timing. Absolutely great!

I enjoyed it, especially when the book took a short break to talk about economy

This story actually made me snort a few times at work! I must for anyone who enjoys subtle comedy.

Not a book about a villain

the story could have been about a villain being a villain. Instead you get a main character brood like a 13 year old boy and do nothing, want nothing, and attempt to work toward nothing. as the book goes on the main character does less and less and the story shifts away from him more and more until it is about other characters who also do absolutely nothing.

a villain should want or need something and sacrafice things in order to achive that goal, making them a villain. a character sacrifices friendship when he betrays his freind, sacrifices his humanity when he becomes undead... our character nighther wants anything particularly nor sacrifices anything to achive his not existent goals.

he feels like he would like to be a dark lord... poof a magic book and an army find him and tell him he is a dark lord! he has no power or intelligence and gets into trouble, POOF. turns out he is a dragon (mind you he doesn't do anything as a dragon, just sort of hangs out and people run away).

this is a book about things happening to people and then those people waiting for something eles to happen.

hell no characters make any decisions the entire book. they are just swept up in events that happen to them without even seeming register that they are happening

the central conceit, that there is a book that teaches dark lords how to do there job, is quirky and slightly humorous... but besides reading that handbook our character does nothing. there are lengthy chapters of the character reading about how a dark lord might gather power about him..... does our main character apply this knowledge? do we see him take initiative or do we get to watch him establish his strength? no. are these passages entertaining? not really, unless endless references to the lord of the rings is entertaining to you.

there is no mystery, no suspense, no action, no character development.

Give the story a villain, make that villain interesting and have him aggressively pursue his goals, do anything at all with the handbook premise besides wink at the audience, have something happen or someone make a decision at some point.

Has The Dark Lord's Handbook turned you off from other books in this genre?

used more than 3 voices for the characters. every ork sounded like an old man, every woman sounded like a British noble and the main character was the narrators voice being flat.

the premise has potential but is squandered unsalvagably

save your money: synopsis: there is a book that teaches someone how to be a dark lord, the main character reads it and accomplishes nothing else. there is a stilted attempt to make the morgage crisis of the 2000s a valid plot point in a fantasy setting and besides being vaguely clever is pointless and dull. there good job you have saved yourself hours.

Great, except for the ending.

A very fun world, expertly brought to life. My only complaint is that the ending was a bad riff on the classic starwars, good vs evil ending.