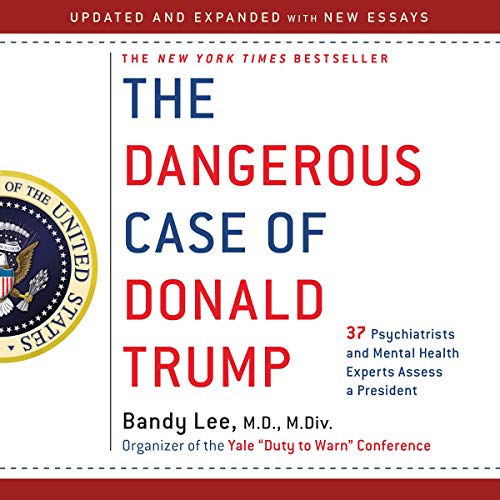 The Dangerous Case of Donald Trump

The Dangerous Case of Donald Trump

As this best seller predicted, Trump has only grown more erratic and dangerous as the pressures on him mount. This new edition includes new essays bringing the audiobook up to date - because this is still not normal.

Originally released in fall 2017, The Dangerous Case of Donald Trump was a runaway best seller. Alarmed Americans and international onlookers wanted to know: What is wrong with him?

That question still plagues us. The Trump administration has proven as chaotic and destructive as its opponents feared, and the man at the center of it all remains a cipher.

Constrained by the APA’s “Goldwater rule”, which inhibits mental health professionals from diagnosing public figures they have not personally examined, many of those qualified to weigh in on the issue have shied away from discussing it at all. The public has thus been left to wonder whether he is mad, bad, or both.

The prestigious mental health experts who have contributed to the revised and updated version of The Dangerous Case of Donald Trump argue that their moral and civic "duty to warn" supersedes professional neutrality. Whatever affects him affects the nation: From the trauma people have experienced under the Trump administration to the cultlike characteristics of his followers, he has created unprecedented mental health consequences across our nation and beyond. With eight new essays, this edition will cover the dangerous ramifications of Trump's unnatural state.

I wanted to listen to professionals giving their professional opinions on Trump's psychological profile but the first 4 chapters are explaining why they have to report this and even comes off as a little personal. I appreciate the position and even ressemble it a bit. But cut through the crap and give us what you think. For heaven's sake, that's the whole reason why I listen to audiobooks, so as not to waste time.
But it was too difficult for me to finish so I only made it past Chapter 4. Throw out the "Hitler" and "evil" propoganda and give me what we came to hear. Is he a sadistic, evil lunatic we should all be afraid of or is he just the smartest man to have ever understood the deception of human behavior.

What a blown opportunity

I was looking for real meat here, something to help me put tangible, sane, professional criteria onto what appears to be the most malformed individual ever to enter the White House. What I got instead was a repetitive, poorly edited bag of polemics. Despite my being motivated, less than halfway through I gave up: it was clearly not worth the time.

Even worse, btw, were the related YouTubes, which do a stupendous job of making these psychiatrists look like kooks. (And I say that as someone who has worked productively with psychiatrists - THESE ones are kooks, like the one who positioned his webcam so that he has spider plants coming out of both ears.)

Blown opportunity, as I say. And we live with the consequence.

This is scary stuff!

I have often reacted to things that our president has done or said by thinking that this is just not normal. This book, authored by 27+ professionals with sufficient medical credentials to make that assessment, confirms those fears. The contributors to this book offer their professional opinion, based on the presidents own statements and actions, that Trump may not be just an unconventional president, but a sick one. None of the contributors have done an actual examination of the president, but with the wealth of video and audio available through todays 24/7 news reporting, these experts each independently reached a unanimous conclusion that the president's current state exceeds "not normal" and approaches a level of psychosis. This book is both truly entertaining and scary!

No new revelations, almost a waste of time.

Happy it is over. Hard to finish. All obvious observations. Hmmmm..... Don't waste your time with this title.

This important book consists of stand-alone articles written by 27 mental health professionals. The articles necessarily differ in style and overall quality, but the majority are very informative.

Almost every discussion of psychiatric symptoms is right on target, with abundant examples in each case. If you think our president might suffer from narcissism, sociopathy, bipolar disorder, or cognitive decline, you are right- these authors make an excellent case for a combination of those dangerous conditions.

The most important conclusion of every article is that we are faced with a leader who is unfit to lead, and who could easily drag the world into a nuclear war in the service of his fragile ego. Solving the problem is more difficult than diagnosing it, but one chapter even discusses the application of the 25th amendment.

Since each professional reads their own section, the narration is uhhh... well, not professional... but to hear so many pros, confirm what we have all been saying all along, is great.
I recommend this audio book.

If you could sum up The Dangerous Case of Donald Trump in three words, what would they be?

The authors argue that the standard ethical restraint against diagnosing political figures with whom they have no clinical relationship, should not apply in the case of Donald Trump becausehe presents a unique danger and therefore, they have a countervailing obligation to the public to inform and warn, . That makes sense to me and I gave no doubt that Trump qualifies for some abnormal psych diagnoses, but many if the essays lapse into partisan diatribes that give lie to the premise. I think Trump's an ass, but in the end, many of these essays are just cheap shots, cloaked in the gravitas of expertise.

Listen to this and slap your head in disbelief

An important book for everyone to read. Who is our president, and why is anything he says believed?

This book may be difficult to get through as a lay person. It was interesting but this is not a book you read in a couple of days.

A Dire Warning About a Malignant Narcissist!

A Must Read, and cogent exposition of the real dangers of the tyrant in office, by those learned enough to take a stand, to warn us. Terrific and terrifying in it's revelations and truth.