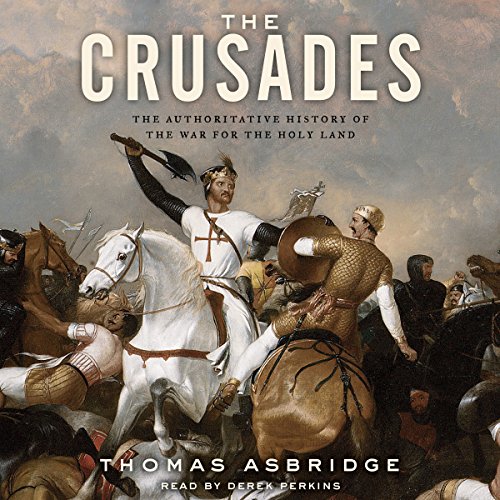 The Crusades is an authoritative, accessible single-volume history of the brutal struggle for the Holy Land in the Middle Ages. Thomas Asbridge - a renowned historian who writes with "maximum vividness" (Joan Acocella, The New Yorker) - covers the years 1095 to 1291 in this big, ambitious, listenable account of one of the most fascinating periods in history. From Richard the Lionheart to the mighty Saladin, from the emperors of Byzantium to the Knights Templar, Asbridge's book is a magnificent epic of holy war between the Christian and Islamic worlds, full of adventure, intrigue, and sweeping grandeur.

"Derek Perkins is, as always, a matchless narrator. One could relish this production entirely for the music of his pronunciation." ( AudioFile)

There are a few topics that get short shrift in Asbridge's account, like the Albigensien Crusade and the People's Crusade. But if you want a comprehensive history of the wars fought in the Middle East, he's your guy. Asbridge writes with great narrative pace without sacrificing detail; he clarifies both the complex political history of Outremer and the moment-by-moment action of the great battles and sieges. The story is filled with great personalities - Saladin, Richard Lionheart, the sad Louis King of France, the brutal Baybars. A final chapter reflects on how the crusades have been used as reference points in later history. Derek Perkins' reading is brisk and interesting.

Learned more from this than in the past 60 years.

This book taught me more than just about any other historical piece I have read. It manages to masterfully put the Crusades in a format that shows the personalities on both sides that created the political conditions that fueled the hundred years of violence between two competing religions, philosophies and political systems for dominance of Palestine and its religious sites, holy to both sides.

Crash course on the Crusades

If you could sum up The Crusades in three words, what would they be?

What struck me was the general ineffectiveness of the Crusades. Basically, only the First Crusade was a real, striking success, conquering Jerusalem against all odds. The Third Crusade was somewhat of a success, gaining the Crusaders Acre. The rest ranged from minor failures to complete failures.

Which character – as performed by Derek Perkins – was your favorite?

I was enamored by Richard the Lionheart, especially how he outsmarted Saladin. Baybars was effective in his campaigns. He shone in his use of communications; using fast messengers on horseback and deception.

The two failed Crusades to Egypt were particularly heart-wrenching.

What irritated me somewhat was the ignorance of the writer on Islamic law. He writes that Greater Jihad (ie, the internal battle for one's own soul, الجِهاد الأَكْبَر) is the jihad that is written about in the Qu'ran. This is plainly wrong. Most references to jihad in the Qu'ran and Hadith are about the Lesser Jihad (الجِهاد الأَصْغَر), which is the one all kufar should be aware of.

The author seems to take the time to linger on Crusader atrocities, but quickly skips over Muslim atrocities or refers to the tit-for-tat character of it, even if 100 years after. This way of looking at crimes is very similar to the modern 'soft bigotry of lower expectations' where westerners are held to other standards than non-westerns.

Mention is made by the author that the Crusades were unilateral aggression by the Crusaders. The fact that Christianity had to suffer for over 4 centuries of relentless aggression by Muslim invasions and conquests is waved away.

If you do not care for the Author's personal opinion on this matter, be sure to skip the last chapter.

Get an old map

I really enjoyed this book!. I did need an old (Time/year specific) map to really understand where the countries/cities were and their relationships to where people traveled. The first few hours of listening were a little difficult as the names were 'new" to my ears. After reviewing a map and understanding the names the book became a GREAT listen. Understanding who and why from most sides of 200+ years of Duking (pun intended) it out. We really never learn from the past, just relive it thinking we are better and smarter. I am glad I did not live beck then as life was very much harder than listening to true stories on a cruise ship.

A comprehensive window into the past

This book takes the listener back in time to the period of the great Crusades into the Holy land. Told from both sides of the story, it links these events into todays chaotic Middle East, and gives perspective into one of the basic causes for the Protestant Reformation a few centuries later. Derek Perkins handles the Arabic names with ease and his delivery is first rate. Of particular interest to me was the telling of the story of the Mongol invasion and how they were blunted by the Muslim world in the Middle East. All in all a great listen for those who want to get deep into this topic to understand its causes and effects.

Really good, with well researched and objective content. However, there are a few small problems. The author gets the characteristics of European arms and armor completely wrong. He says that mail was very poor armor, when in fact it is very effective, taking tremendously powerful hits and keeping the wearer safe. His view of European swords is also wrong, viewing them as crowbars rather than the agile weapons they truly are. This shows a disturbing lack of personal research of the primary sources. All one has to do is read contemporary accounts and handle accurate reproductions to know how wrong this segment was.
Also, the author consistently mentions different units of currency throughout the book but with no comparison of the currency or what a unit of the currency was worth. This information might be in the physical book.

Informative but vague on details.

Great if you want a series of events with a timeline but lacks in depth events and detail. I also felt the author was bias in his opinions on certain events against the Latin crusaders. It came off more as a history and evolution of Islam and the Middle East during the crusades rather than a History of the Crusades.

Performance is superb and research, storytelling, and putting it all together are very well done. Opened my eyes to a new viewpoint on pre-crusades and arguments on whether or not Muslim aggression sparked the crusades. Didn’t really care for the ending. Author felt he needed to do a little Bush bashing. He always strives to give context to Islamic actions, but isn’t willing to be that generous for contemporary Western actions. Should’ve and could’ve just left that whole part out.

I have recommended this audiobook to friends, who like me, appreciate in-depth research presented authoritatively in easily-digested narrative.

I enjoyed the detailed accounts of the actors, attitudes, motivations and locations of the events we know as the Crusades, presented from Western AND Muslim points of view.

What does Derek Perkins bring to the story that you wouldn’t experience if you just read the book?

Though this book provoked no extreme reactions like laughter or tears, I came away with a feeling of complete satisfaction for having spent the time listening to the accounts of a two hundred year span of human history.

Cloaked in a coat of religion

Even when every occidental warrior was wearing the sign of the cross on
his/her coat, religion was but a thin coating for the majority of the
common warriors who largely pursued their personal agendas of freedom,
lust for adventure, sexual predation and riches whereas their
leaders took the battle motivation to advance their own power
schemes. In retrospect - peering through the mist of times - all
participants loose their individuality and deviations from the norm
and are associated to their stereotypes: noble or not, Christian or
Muslim, aggressor or victim, etc. This seems to be the message
that resonates with every additional drop of detail in this well
crafted book. The claim of "authoritative" is Utopian as every new
discovery puts a once believed truth in perspective, but on the
whole the book remains an interesting read and a useful suggestion to
all individuals who try to create story 2.0 of this unnecessary
bloody history.

This is a very good book on the Crusades. I found it a very concise but at the same time exciting book on middle eastern medieval history.