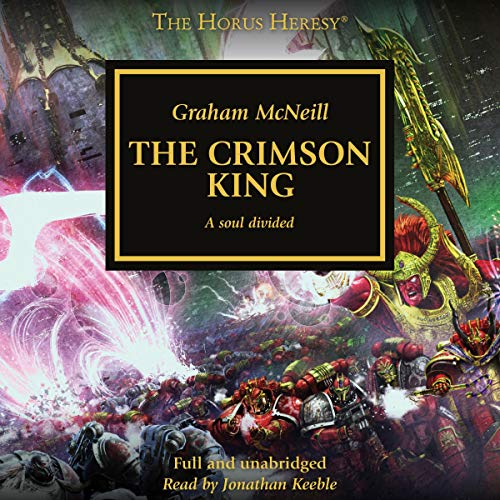 After the razing of Prospero, Magnus the Red spirited the Thousand Sons away to the aptly unnamed Planet of the Sorcerers, deep within the Eye of Terror.

Removed from the concerns of the galaxy at large and regarding the Warmaster's unfolding Heresy with cold detachment, he has dedicated his hollow existence to the preservation of all the knowledge once held in the great libraries of Tizca, should mankind ever seek such enlightenment again. But his sons can see the change in their primarch - he is a broken soul whose mind and memories are slipping away into the tumult of the warp.

Must read / listen if you like Thousand Sons story

What did you love best about The Crimson King?

Story is very interesting and it shows main characters such as Magnus, Ahriman etc. Narration is cool, would recommend for any TS.

Really, really tried to finish this book, as it actually contains new drive in the Horus Heresy story arc rather than just tread the water like many recent books did. Unfortunately, Graham McNeill delivers one of his worse performances in this book. It is littered with his common faults - poor, infantile dialogue, cheesy gimmicks and stereotypes and long segments of exposition and zero story progression. As a textbook on the universe lore it might have value for the dedicated researcher, but as a piece of entertainment it is a failure. The reader makes a decent go at rendering the awful dialogue, but this does not really help the poor material at all. Had to finally abandon the book two thirds in due to typical McNeill form, despite being set on finishing. If you like previous McNeill books you will probably love this as it is in his typical style, though it is certainly not one of his better efforts. Otherwise, steer well clear.

Absolutely brilliant storytelling and set up. The voices and personality show through the master performance given here.

the best insight into the 30k era thousand sons, a must read if you want a bigger picture of the story

This was an awesome story to listened to! I always wondered at the fates of the 3 remembrancers back in The Thousand Sons and I thought we will never see them again, but to my surprise, they played a very vital role in this story!

the narration is awesome. but the narrative was meandering and uninspiring. by the time it ended I found myself wondering why I took the trip in the first place. the first real dub for the HH series for me.

The worst part was the narration of the Space Wolves. They were barely intelligible.

But it was an interesting insight into Ahriman and Magnus.

aside from the Space Wolves storyline, and catching up with Lemuel, this book was extraordinary really tedious. there was so much magic and obnoxious overpowered blah blah blah, one thing just bled into the other until the end of the book. the only times it was actually entertaining was when they were doing cartomancy on Lemuel. this actually makes me hate the Thousand Sons.