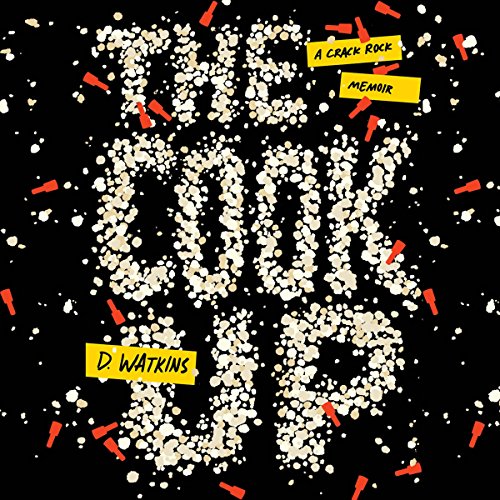 Reminiscent of the classic Random Family and The Short and Tragic Life of Robert Peace but told by the man who lived it, The Cook Up is a riveting look inside the Baltimore drug trade portrayed in The Wire and an incredible story of redemption.

The smartest kid on his block in East Baltimore, D. was certain he would escape the life of drugs, decadence, and violence that had surrounded him since birth. But when his brother, Devin, is shot - only days after D. receives notice that he's been accepted into Georgetown University - the plans for his life are exploded, and he takes up the mantle of his brother's crack empire. D. succeeds in cultivating the family business, but when he meets a woman unlike any he's known before, his priorities are once more put into question.

Equally terrifying and hilarious, inspiring and heartbreaking, D.'s story offers a rare glimpse into the mentality of a person who has escaped many hells.

" The Cook Up is classic and cinematic, told with an observational acuity that hits you where it hurts." (Frannie Kelley, host of NPR's Microphone Check)
"D. Watkins is his generation's David Simon. Another brilliant storyteller who takes you into the heart of East Baltimore and never flinches as he shows you the real." (Touré, author of Who's Afraid of Post-Blackness? What It Means to Be Black Now)
" The Cook Up is an important story for both black and white America, as well as this country's political leadership, to read, if we're truly going to tackle the challenges that are facing our communities all across the country." (Chuck Todd, correspondent on NBC's Meet the Press)

Interesting inspiring story. Well worth the listen.
An first hand, inside look at the life and struggles facing black youth and black society in Baltimore. I heard the author being interviewed on US public radio and knew I wanted to hear his compelling story. I wish the author well.

This is a real look at life in the projects. You feel as if you are right there in the action.

I thought the author could've narrated the book better. There wasn't many inflections in time to differentiate and give more life to the various people in the story.

The words made the story come to life. I didn't want the book to end.

This a great story about D Watkins' upbringing and the trails and tribulations that he experienced in Baltimore. I live 20 minutes from Baltimore so this hits very close to home. I've had the opportunity to meet Watkins multiple times in Baltimore, sparking conversations, ultimately leading me to intellectual insights and a new perspective on social issues. He left the drug fueled fast money lifestyle as a prominent drug kingpin in Baltimore, to teach English and instill change in his community. To this day, Watkins continues to be one of my true life idols that you can have an honest conversation with. One that is not self consumed with his fame, relatable, and promoting a skill (literacy) that changed his life in his community.

Just finished and it was so good. Raw and real. May be alittle hard to get some of the slang etc if you're not familiar with the black culture but none the less everyone can learn a lesson. Love his description of everyone. So funny and real. Well written. Made me laugh out loud. Made me tear up at the end. Can't wait to listen to his other book.

I'm glad Dwight had made something of himself and has shared this story for the youth. It's good to have a different perspective, but the story lacks in depth information on sustainable solutions. Education is a key stepping stone, but in deteriorating school facilities and systems, it is increasingly hard to mine that value and make it available for every student. What are the influences and conscious conditions that we can change to free the youth from this replicating pattern of self distruction? Thanks for making an attempt.

This is an authentic and raw account of life in Baltimore. Watkins is a brilliant storyteller who takes you through his life growing up and making it in an inner-city when so many odds were stacked againt him. A must read.

True story of a life and how it is lived.

I don't know what it is like to grow up in "the hood" and live that life. This writer is eloquent in telling that story.