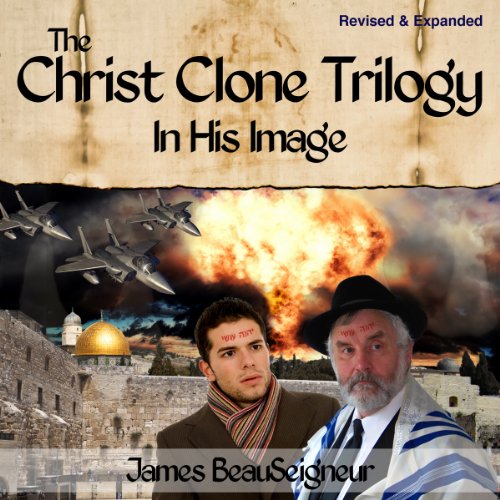 The Christ Clone Trilogy - Book One

Two nuclear wars. Three asteroids. Demonic madness that kills one third of the world's population. Into this, a savior will rise, cloned from Christ. It's not fiction. It's prophecy.

The Messiah of the new age. His coming is prophesied by more than a dozen major religions. Cloned from live cells of Jesus Christ found on the Shroud of Turin, Christopher Goodman was born into the most turbulent time in human history. Mentored by former UN Assistant Secretary-General Robert Milner, Christopher rises in position and power, and displays remarkable wisdom and compassion. But through disjointed bits of dreams that sometimes haunt him, Christopher reveals significant troubling errors in the biblical record of Jesus' life.

The reason for Robert Milner's interest in Christopher becomes clear: the world is about to undergo a time of destruction and chaos darker than any in history, with impending nuclear war merely a faint precursor. Milner explains that without Christopher, humanity will not long survive. Under Christopher's leadership, however, mankind stands on the threshold of a final great evolutionary leap that will bestow on the human race god-like powers. This is the reason, Milner says, that Christopher was born.

In Israel, an unexpected threat to Christopher's ascension is growing: two men, possessed of incredible supernatural powers, one claiming to be the 2000-year-old Apostle John, the other an apostate Hasidic rabbi named Saul Cohen. Together, the men lead an outlawed cult of 144,000 followers, each branded with the names Yahweh and Yeshua on their foreheads.

Waste of time and money

This book was a huge disappointment. I hoped for a fictitious rendering of the events written in the Book of Revelation. Instead it was amateurish, disjointed, and very unbelievable. For example, 20% of the population inexplicably dropped dead, and people simply went on with ordinary life. Then there was a nuclear explosion, and the main characters just went to the next meeting. Are you kidding me?

The performer was awful! His women's voices either sounded like screeching crones or simpletons. Many of the character's voices were just cheesy accents. In parts, it sounded like he was recording in a large empty warehouse.

I listened to the first half then finally gave up - something I rarely do.

Ruined by the narrator

The story is entertaining, if a little simplistic in style, but somewhat inspirational. The narrator however totally ruined this book series for me with his shrill falsetto buffoonish portrayal of women’s voices and his cartoonish attempts at various male voices. It would’ve been better had he just read it straight.

Good Thing I REALLY wanted to &quot;read&quot; this again

Would you try another book from James BeauSeigneur and/or Kevin O'Brien?

I will be listening to the rest of the Trilogy.

What other book might you compare The Christ Clone Trilogy - Book One to and why?

I have read Left Behind.

Do you think The Christ Clone Trilogy - Book One needs a follow-up book? Why or why not?

You mean past the three? No. You begin beating a dead horse. Obviously, there are two more because it's a TRILOGY, so ....

I read the trilogy when it came out. I wanted to re-read it and listening is convenient. This narrator is worse than anyone I've EVER listened to. If I didn't want to complete the series, I'd have only made it 15 minutes into the first book.

A. must read for LB fans and a great story on what revelations could be like in the end

Would you try another book from James BeauSeigneur and/or Kevin O'Brien?

Would you be willing to try another book from James BeauSeigneur? Why or why not?

Yes. Good premise but the story gets lost in the politics of the UN. It gets rather tedious. Big shifts in time.

The narrator's voice of the characters give many a cartoonish feel. The voices are actually irritating at times.

Was The Christ Clone Trilogy - Book One worth the listening time?

Only to get to book two.

I am enjoying book 2 so much better than this one. The narration is at times laughable and irritating. The story drones on about political maneuvering at the UN that could better be spent on filling some gaps of time.

I thoroughly enjoyed this book. It started off slow but it has a way of drawing you in, stick with it because it gets a lot better.

The imagination of the author

His performance was ok I really liked the story.

he only does 4 voices in 4 accents. and his feminine voices sound like a 50 year old man is trying to be a 15 year old tween on the phone.

I desperately hoped for a great Christian apocalyptic novel. Disappointed by the Left Behind series I thought I'd try this. Terrible. The plot and story would be so good in the hands of a competent author. One second everything is cohesive and the next, the protagonist is running near a sinkhole for ten minutes with no explanation how he got outside or the relevance to the story.

The author relies heavily on exposition and adverbs to tell his story instead of creating compelling action. Basically it's just juvenile. The performance is good but so distracting. The Jews are basically cartoon characters who all sound the same and make it hard to follow along. I wanted to like this. It's awful.