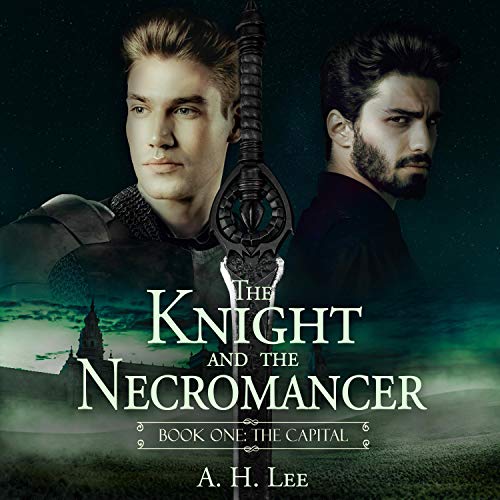 It's a classic fairy tale: Knight meets necromancer. They argue. They fight. They...make out?

Prince Roland comes home from the war to bury his father and sees his sister on the throne. He sneaks out to his favorite tavern for nostalgia’s sake. It’s the place where he kissed a man for the first time, the place where he used to carouse with the lover he buried on a battlefield.

Roland expects to flirt with a few strangers for old time’s sake. He does not expect to find a fascinating scholar from out of town - a lonely young man with beautiful eyes and an obvious longing to be touched, buried beneath a prickly demeanor. Their unexpected chemistry makes him feel alive for the first time in months.

Roland exerts all his knightly charm and is rewarded by the promise of a second date. He’ll need something to look forward to tomorrow, since he must spend the day in council with his family’s sworn enemy - a necromancer whom his sister has rashly invited to consult about the war.

Sairis is a necromancer with a price on his head. He knows that he will have to bargain for his life tomorrow. He’s never been this far from his tower. He’s good with magic, not people. Sairis knows he’s doing something foolish by visiting a tavern the evening before his meeting with the royals - a tavern that caters to men of certain tastes. But Sairis wants things. Things a hunted outlaw can never have.

He’s shocked when a dazzling mountain of a man is unintimidated by his glare. Sairis knows a knight when he sees one. He has killed plenty of knights. But this knight is funny and kind. Sairis finds his defenses melting in spite of his best efforts. Maybe he could go on a second date with this person.

Of course, he’ll have to get through tomorrow first...when he must bargain with the hated royals who have persecuted him all his life.

Starts out with an intriguing concept: the prince/knight using a fake name and unknowingly sharing a kiss with a necromancer. The next day, they're both in a war meeting and realize their mistake. I was instantly engaged--and promptly let down.

Right out the gate, there's too much trust and lovey-dovey feelings. They'd met one single time for a span of possibly ten minutes, and already the prince is weeping at the thought of losing him. It was not remotely believable and grated on my nerves.

This was made worse by the fact that the action immediately starts with no breathing room for the characters to talk and develop a connection. The author apparently decided to skip writing that vital part BEFORE everything kicks off. I had no time to care about the characters before the story asks me to worry about their safety. The characters do eventually talk after, and I was mildly engaged and interested, but the plot interrupts this with nonsensical action that takes place WAY too fast. It had been, what, 3 days? The writer knows people don't own cars in medieval fantasy, right? Hell, even with a car, 3 days is too fast.

Steamy scenes are laughable. I felt no excitement for the characters and didn't understand what was happening. A demon enthralling your family? Great time for a quickie in the same room! SERIOUSLY?! This is so impossible to believe I got secondhand embarassment for the author. The steamy scenes have that first-fanfic-attempt style to them, which if you're not familiar, means they make no physical sense, they're hamfisted into illogical moments, and there's no sexual tension. Boring.

I also got REAL tired of the modern phrases splashed in ("catching feelings," "two for the price of one," etc.). Completely distracting. This really does seem like a first draft. The author would have benefited from working on it a lot longer and releasing all 3 parts in one smooth book, rather than rushing to release the first part. As it is, the story's first part feels cramped, rushed, and half-@ssed.

I bought this knowing it was a 3-parter and didn't expect to be bothered, but it's a lot more obnoxious than others let on. There is absolutely no reason for it. It cuts off quite literally mid-scene and not even at a particularly thrilling cliffhanger. I don't mind authors breaking stories into parts to maximize profits, but I DO expect those parts to be complete parts with logical stopping points. This one is not. I felt like I wasted my time.

All-around disappointment. Narration is great, though!

I absolutely dispise cliffhangers. This book ends in the middle of a scene. It seems that the author chopper up one book into three parts to make more money. I hate it . That being said I very much enjoyed the book and the narration.

Half a book? 3 credits for 1 audio book? Seriously

Normally I don't give bad reviews unless the book is terrible. In this case, I'm giving a bad review because of the manner in which it "ends". It doesn't end, it just quits mid-scene. There is no conclusion at all. Not a cliff hanger, just ends. Or should I say just ends and suggests you pay another credit for the next chapter? If you think your book is worth $35+, just ask $35+ upfront. Now I have to go through the hassle of returning it.

great except the last part...…. Some what of a spoiler, but really has nothing to do with what happens in the end........like SOOOO many novels, the entire last part made no sense, why didn't they just tell the truth, at which point all of what happened is unnecessary …..

I listened to the entire thing in one sitting and need more. the characters are fun and engaging, the dialogue was natural and really well written! Sairis is adorable and Roland is refreshingly self aware, I can't help rooting for them. the world is enjoyable and I really liked the little mini heist situation.
the narrator started out a little stiff but either he eased into the story and characters or I just got so invested I stopped paying attention to how he read it, the writing was just that good.
I hope audible doesn't take forever putting out the rest of the books for us

The Knight and the Necromancer is a welcome and entertaining change in the often cookie cutter , formulaic MM romance genre.

Imaginative and original with a layered and strong world-building comes to mind when I think about this book.

I am listening/reading it simultaneously . Kirt Graves narration is on point.

The story was pretty good, but boy do I hate the abrupt end stating that this is part 1 of 3. I do not like Kirt Graves cadence. I would usually skip a book that he narrated, but wasn't paying attention. He sounds so laconic, and his voices for the two male leads were at odds with what was actually written about them and the things they said. I'm going to stop here and not buy they next two.

Not only does this story have amazing main characters -Roland with his calm and protectiveness, Sairis cool and shy - its side characters like Queen Daphne and her fiance are cool as well and get a good bit of character development.

But the plot itself is imaginative, it has twists and turns and kept me guessing what was going to happen next. There's an interesting magic system: sorcerers need demons to perform magic, necromancers take their power from the transition of energy. I'm curious to know more about it!
Of course, there's the chemistry between Roland and Sairis with a few steamy scenes - all well-balanced and they make sense in context. I didn't know who the bad guy was until the very end, when it all made sense. A+ for foreshadowing!

The narrator does a great job as well, giving all characters their own voice and not over-acting anything. I thought the female characters sounded a bit too high-pitched, but that does happen with a man's voice.

I can't wait to listen to the second story, because boy does this one end on a cliffhanger!