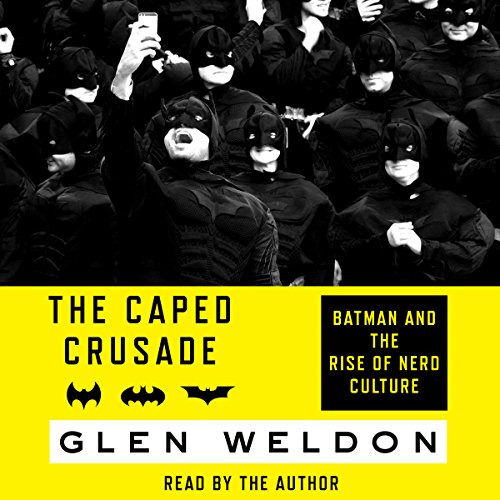 A witty, intelligent cultural history from NPR book critic Glen Weldon explains Batman's rises and falls throughout the ages - and what his story tells us about ourselves.

Since his creation, Batman has been many things: a two-fisted detective; a planet-hopping gadabout; a campy pop-art sensation; a pointy-eared master spy; and a grim and gritty ninja of the urban night. For more than three-quarters of a century, he has cycled from a figure of darkness to one of lightness and back again; he's a bat-shaped Rorschach inkblot who takes on the various meanings our changing culture projects onto him. How we perceive Batman's character, whether he's delivering dire threats in a raspy Christian Bale growl or trading blithely homoerotic double entendres with partner Robin on the comics page, speaks to who we are and how we wish to be seen by the world. It's this endlessly mutable quality that has made him so enduring.

And it's Batman's fundamental nerdiness - his gadgets, his obsession, his oath, even his lack of superpowers - that uniquely resonates with his fans who feel a fiercely protective love for the character. Today, fueled by the Internet, that breed of passion for elements of popular culture is everywhere. Which is what makes Batman the perfect lens through which to understand geek culture, its current popularity, and its social significance.

In The Caped Crusade, with humor and insight, Glen Weldon, book critic for NPR and author of Superman: The Unauthorized Biography, lays out Batman's 78-year cultural history and shows how he has helped make us who we are today and why his legacy remains so strong.

Interesting but performance was frustrating

I like Batman and this book was definitely comprehensive and well researched. Mr. Weldon also narrated the book and he is very enthusiastic in his performance. He chooses to use several voices that I found very annoying though. His normal reading is punctuated but flows well. The rest of it was just unnecessary and detracted from my enjoyment of the book. I would suggest reading this book instead.

A Batman Thesis for Nerds and Normals Alike

An opening along the lines of “Holy book reviews, Batman!” or even “Pow! Zap! A Batman book!” would do this title a disservice, especially seeing as how author and NPR comic-book critic Glen Weldon tirelessly points out how the legion of Bat-Nerds have desperately tried to bury any references to the full-color, high-gloss Batman of the late sixties in favor of the Denny O’Neil comics of darkness and night, and Christopher Nolan’s growling films. Weldon covers this and a whole lot more in his meticulously researched, thesis-in-the-making, THE CAPED CRUSADE, which provides the ultimate pop-culture look at all things Batman.

Weldon’s book, to stay within a theme, hangs between a historical look at the character’s comic book origins, a healthy discourse on the Adam West series from 1966, and a deep cut insider-look at the Burton-Schumacher-Nolan films. All of these insights are heavily intertwined with nerd backlash and fandom praise. Weldon shows the fine balance of acceptance between how Batman plays into pop culture, and how outside events, shaped by various creator control, influence the stories of the Caped Crusader.

Loaded with interviews, quotes, and plenty of subjected barbs at fandom foolishness, THE CAPED CRUSADE is a fun, quick read. Weldon maintains his nerd credentials throughout, but also provides an impartial take on the character to satisfy the reading pleasure for the occasional “normal” who might only be familiar with all things Christian Bale. Or Adam West.

What Weldon fails to properly show, or doesn’t focus nearly enough on, is the primary reason that most of the silent majority of Batman fans, that is those not taking to the cons or the internet with their scornful posts and rants, are simply Batman fans… because it’s fun. Many fans might understand, or probably just blatantly ignore, the editorial mandate in the comics to replace Batman with an armor-wearing psychotic, or to isolate the brooding tactician from the rest of the DC Universe, or a filmmaker’s decision to give the character a rubber suit complete with nipples. Fans want to be entertained with stories and the legend – both the fantastical and the grounded – of Batman, regardless of Dr. Hugo Strange is ridiculous or Poison Ivy just plain silly. Or if the animated series of the nineties kicks ass in just about every imaginable way.

A great deal of fans already understands some of the inherent foolishness at the idea of a man who mourns the loss of his parents by dressing as a bat – and ignores such dogma. They want metaphor, or fisticuffs, or over-the-top action, or a long-running opera. Batman has survived this long in the public eye and public consciousness because, as Weldon does point out, everyone has their favorite version of the character. And there are plenty to choose from. So enjoy. Dive into the book and perhaps be inspired to revisit, or just plain discover, some of those great, and maybe not-too-great, Bat stories available everywhere. Same Bat-time. Same Bat-channel.

This book was very very good. but what puts it over the top is Glen Weldon. His narration takes a book (which is very well researched and on point for any Batman fan- nerd or casual reader) from a 4-5 star book to a ten oit of five. His impersonations are spot on as well as hilarious and he really brings this book to life. No other guy could've done it better. Really really well done. I cannot recommend this audiobook highly enough

Get told you're enjoying batman wrong while author cries about someone doing that to him.

Great History of the Batman. Worst. Narrator. Ever

Loved the story. It was well written, well researched and does an excellent job of presenting the story of Batman as one big character arc. (with plenty of twists & turns.) As a lifelong fan (starting with '66 repeats and SuperFriends in the early 80's) it was great to take such a wide view of the character, and get a sense of the behind-the-scenes drama and historical contexts that shaped the different popular incarnations.

My only real complaint on this is the narration. I nearly returned the title after attempting the first chapter. The narrator (also, author) seems rushed (and flat) at times and the way over-the-top impressions are really dreadful. While I certainly understand using a (bad) version of The Simpsons' Comic Book Guy as the de facto voice of nerd culture, it completely took me out of the story. Same goes for the mediocre brogue of his Grant Morrison or the fey silliness of his Joel Schumaker.

I would still recommend this title fully. Just be prepared to cringe your way through certain passages.

If this had been read by a simply competent narrator it wood be a great book, but Glen Weldon's narration makes this near perfect.

The only fault I can find is that Weldon also wrote a book on Superman and there isn't an audio version of that book read by him.

It is read by the author, and his reading is as wonderful as the book itself. The writing has fun with the history, and Mr. Weldon has fun with the reading. He does voices for almost every quote. He adjusts his tone and cadence appropriately for each moment in history.

I wish every audiobook was read this well.

The Narration is wonderful.

Purchased the book because I am a fan of Glen Weldon on NPR Pop Culture Happy Hour and looked forward to hearing more of Mr. Weldon's distinctive diction. His narration is heavily stylized, and I would have preferred a little less of his use of special voices because his natural voice already includes sufficient tonal variations, but overall his reading is hugely entertaining.
I am both a comic light-weight and someone who wishes to write sufficiently well to write to grammar girl. Mr. Weldon's writing is excellently researched, organized, and presented. His writing style is precise like a pointillist.

Weldon often tries to get in a fun accent in his role of panelist for NPR's Pop Culture Happy hour. He gives himself plenty of opportunities here in his excellent performance of his well thought out book. I've been a Batman nerd for quite a while and I was able to learn some history from this book, to laugh, and even , unexpectedly, to do some introspection on when I've tried to say "That's Not Batman!" (I've definitely said it in regards to Zack Snyder's take on film in Batman v Superman ugh). Two thumbs up. Definitely give this a listen whether you're a nerd or normal.

If I can just have Glenn Weldon narrate everything from now one, that be great. The book itself is excellent too.