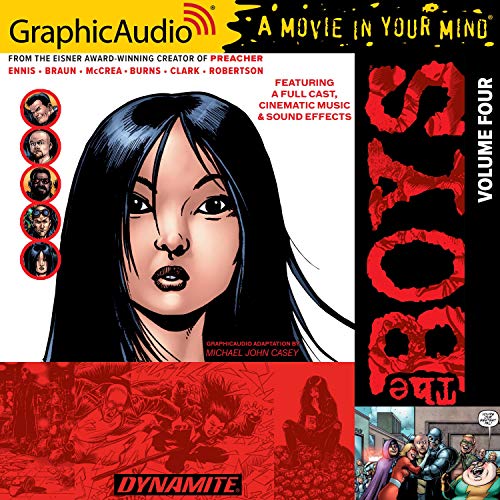 Butcher discovers Hughie’s relationship with Annie the Starlight, and a new executive at Vought starts to climb up the ranks. Butcher decides to test where Hughie’s loyalties lie, but does it behind the rest of the team’s back.

At a Christian/Supe convention, Hughie discovers Annie’s powers and The Homelander moves forward with his plans. Hughie then leaves for Scotland to see his family and decide if he should stay with The Boys.

Comics issues adapted to GraphicAudio containing What I Know, The Innocents, Believe, and Highland Laddie.

Give it a listen. It's decent.

It's a pretty decent volume of the omnibus, I suppose. Though, the narrator and Malchemical sound really similar and it kind of throws me off. I feel like it's not horrible, but it's not the strongest volume of the series. I'd still give it a listen because of the chapter involving the Believe Event and onward.