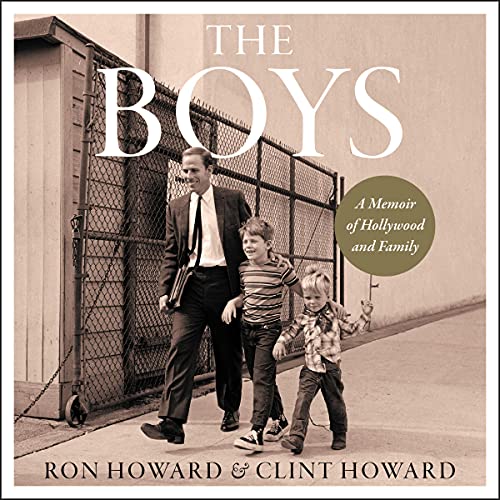 An AudioFile Best Audiobook of 2021

Winner of an AudioFile Earphones Award: "This audiobook is simply a delight...a must-listen."

“This extraordinary book is not only a chronicle of Ron’s and Clint’s early careers and their wild adventures, but also a primer on so many topics - how an actor prepares, how to survive as a kid working in Hollywood, and how to be the best parents in the world! The Boys will surprise every reader with its humanity.” (Tom Hanks)

"I have read dozens of Hollywood memoirs. But The Boys stands alone. A delightful, warm, and fascinating story of a good life in show business.” (Malcolm Gladwell)

“What was it like to grow up on TV?” Ron Howard has been asked this question throughout his adult life. in The Boys, he and his younger brother, Clint, examine their childhoods in detail for the first time. For Ron, playing Opie on The Andy Griffith Show and Richie Cunningham on Happy Days offered fame, joy, and opportunity - but also invited stress and bullying. For Clint, a fast start on such programs as Gentle Ben and Star Trek petered out in adolescence, with some tough consequences and lessons.

With the perspective of time and success - Ron as a filmmaker, producer, and Hollywood A-lister, Clint as a busy character actor - the Howard brothers delve deep into an upbringing that seemed normal to them yet was anything but. Their Midwestern parents, Rance and Jean, moved to California to pursue their own showbiz dreams. But it was their young sons who found steady employment as actors. Rance put aside his ego and ambition to become Ron and Clint’s teacher, sage, and moral compass. Jean became their loving protector - sometimes over-protector - from the snares and traps of Hollywood.

By turns confessional, nostalgic, heartwarming, and harrowing, The Boys is a dual narrative that lifts the lid on the Howard brothers’ closely held lives. It’s the journey of a tight four-person family unit that held fast in an unforgiving business and of two brothers who survived “child-actor syndrome” to become fulfilled adults.

Let’s use the GD word because we think “how could a best seller not use it.”

Why when you have a really good story to begin with do you need to use the GD word right off the bat? So disappointed!!

The recording is awful, loud and then quiet

The volume change between Clint and Ron is huge. Wish they would have fixed that. Really made for a rough listen. Good story though.

A must read and or listen

I had always wondered about these two wonderful boys and men. What a lovely look into their lives. Such a wonderful heartfelt story and such praise for their parents, what a fantastic job at raising them.

I would like to thank the Howard family for sharing their stories!!! It was so wonderful for me to heard how the careers of Ron and Clint came about!!!
Cheers to the Howard's family!!!
Loved the book!!!!
I bought the hard cover so I could own apart of Howard history.
Thanks again, guys!!!

An Honest Story of an Honest "Showbiz" Family

Having not actually sought out this book I wasn't sure what to expect but had Audible credits so I tried it. I am so glad I did. So much so I also bought the print version as well. This is a story of an honest show business family that first off loved each other, worked together, had their trials but always, first and foremost, remain a family.

The narration by the authors, Ron and Clint Howard, make this book come alive. It is not by mere voice actors but the two real people who lived the lives. The story is organized, well written, well narrated. Understand this is a story of their family from the entertainment business side of their lives. An honest look into the private (often not so private) lives of a fine family, regardless if they were Hollywoodites or not.

Thank you Ron and Clint for sharing this wonderful account of your personal family story with the forever prying public. God Bless

Loved all the stories. Confirmed what I always thought. The Howards are just Good People.

Happy Days if you read or listen to this!

What a fun listen! I enjoyed every story they shared and felt they were right in front of me(maybe on my TV?)
I too noticed the change from Ron to Clint and was slightly put off at first, but it was no big deal.
Thank you, BOYS , for entertaining us for so many years and for being so open and sharing your family with us.

A great account of TV history & story of family!

Loved the TV & movie history, the impressive family support and the difference between Ron and Clint that’s very much a part of their relationship and in the end the love and support they have for each other.

Enjoyed the back story on Andy, Don Knotts, John Wayne and the Happy Days cast & crew.

Very impressed with Ron’s focus which seems to be due to his fathers amazing fathering skills and ability to give the correct answers or honest answers to life’s tricky questions of youth and adolescents.

Felt like an honest book and I liked the switching back and forth the two brothers and their different at times perspective.

Lots of things I did not know about the Howard brothers.
Ready for more. Thank you

I grew up with these two and was fortunate to have super parent and fabulous siblings. Enjoy this wonderful book!

Touching. Genuine. Humorous. Insightful. It will make you appreciate the power of a loving family. I highly recommend it.