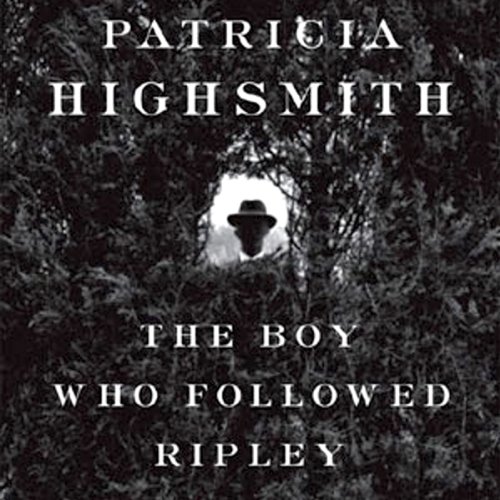 The Boy Who Followed Ripley

In The Boy Who Followed Ripley, Highsmith explores Ripley's bizarrely paternal relationship with a troubled young runaway, whose abduction draws them into Berlin's seamy underworld. More than any other American literary character, Ripley provides "a lens to peer into the sinister machinations of human behavior." (John Freeman, Pittsburgh Gazette).

"Ripley is an unmistakable descendant of Gatsby, that 'penniless young man without a past' who will stop at nothing." (Frank Rich)

This was a slippery Highsmith. Ripley coldly floats between two steep cliffs. He isn't necessarily a likable or even sympathetic narrator, but still manages to be someone it is natural to root for.

With the first three books in the Riplad, I bought into the idea that Tom Ripley was absolutely amoral. But that expecation, that setup, makes this novel seem even more crafty. Highsmith bends genders, flips expecations, dodges emotions, transforms motives, etc., and almost clones Ripley with Frank.

Probably the most disturbing character in the whole series is Tom's wife Heloise. I can sympathize Tom's amorality easy enough, but I just can't UNDERSTAND Heloise. While nothing about her is directly creepy, it is like Highsmith is using Heloise to point a finger at the West or perhaps at the reader.

Once again, Ripley is a fascinating character

What did you love best about The Boy Who Followed Ripley?

I like how Ripley has evolved and the various situations he is placed in.

the author has cleverly placed you inside the mind of Ripley. and a fascinating mind it is

I thought it was great how Ripley wore a ' costume ' and took on the kidnappers. Absolute genius of the imagination

this is not the most thrilling of the Ripley series, but you should give it your time.

Mostly boring revival of Tom Ripley 20+ years after his much acclaimed adventures in Italy in The Talented Mr. Ripley. The suspense, such as it is, seems formulaic. Other sequels were better.

Better than I expected

This book is better than I remembered it being from pat times that I have red it. It isn’t as good as the first three of the Ripliad books but it has its virtues.

I was truly moved by the hopelessness of helping Frank. Truly enjoy the author's works.

Yes. As part of the whole Ripley series. Highsmith's character is a lesson in human nature. the amazing thing about Ripley is that he is such a perfect survivor. Ripley is completely unable to understand the reactions and sensibilities of 'normal' people. and yet he is not devoid of empathy or compassion. He just lacks conscience. He is an enigma but a believable on in Patricia Highsmith's skilled hands. And the reader likes him and doesn't want him to be caught.

What other book might you compare The Boy Who Followed Ripley to and why?

Denise Mina's Deception - the amount of self-deception by a point of view character is comparable. Although more happens in Mina's book. In the Ripley series it is just Tom Ripley, Tom Ripley, Tom Ripley. Highsmith keeps us fascinated with watching him shop, and go about his daily routine.

He stayed out of the writers way and kept his performance subtle, nuanced and note perfect.

I am moved whenever Tom Ripley refers back to Dickie Greenleaf. The murder of Dickie in the first novel is the moment that his psyche shattered into a million pieces so that he can never truly see himself or world clearly. But every time the author evokes that incident the reader feels that shattering again even as Tom skims over it. it is chilling.

The Ripley Series Begins To Run Out Of Steam

I greatly enjoyed the series up until this book; however this title was less fresh and less compelling than the previous works.

If you’ve listened to books by Patricia Highsmith before, how does this one compare?

The plot did not crackle as much as the plots of her previous "Ripley" books had. This felt tired and I stubbled to maintain my attention.

What does Kevin Kenerly bring to the story that you wouldn’t experience if you just read the book?

Kevin Kenerly is a master narrator. As he had read the previous "Ripley" books, he has a great interpretation of the characters that remains consistent from book to book.

Do you think The Boy Who Followed Ripley needs a follow-up book? Why or why not?

I am not sure - I have yet to read the follow-up, as this one was such a disappointment. Perhaps this title was just an anomaly - or it might have been the signal of a series that had lost its drive.