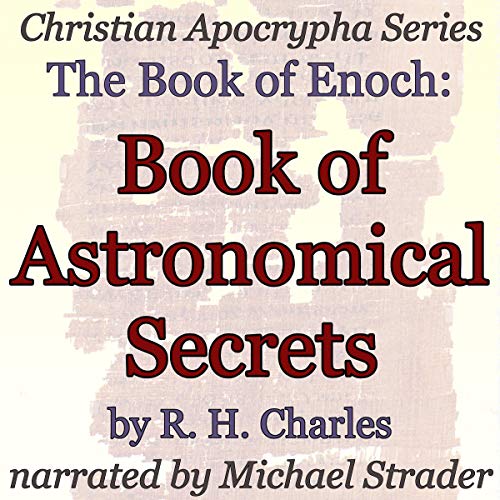 The Book of Enoch: Book of Astronomical Secrets

The Book of Astronomical Secrets, sometimes translated with the title of the Book of the Courses of the Heavenly Luminaries, dates between the third and second century BC. It is the oldest of the collected Enoch texts and comes to us from notable scholar of apocryphal literature, R.H. Charles.

This translation features a new, lengthy introduction. The newly added introduction explores what the original Book of Astronomical Secrets is really all about and offers assistance to the listener. Prior to listening to the original text, you’ll learn about the hidden meanings behind the numbers and symbols discussed in the book.

Among other things, the book describes an ancient calendar which, unsurprisingly, has come to be known as the Enoch calendar. This ancient Enoch calendar, while it may seem similar on the surface, differs from our modern Gregorian calendar in a significant and affecting way. This audiobook contains the astronomical knowledge as it was given to Enoch by the archangel Uriel, during Enoch’s trips through Heaven.

In addition to the calendar itself, Uriel bestows upon Enoch information relating to laws by which the sun, moon, stars, and winds are governed as well as other mysteries of the Universe.

The narrator's performance is so distracting, the content cannot be heard. This narrator could make the Gettysburg Address unintelligible. The narrator has a gift for delivering each word with exactly the same level of excessive annunciation that "Part 2" sounds as dramatic as "holy angel" with each word taking exactly the same amount of time to over-pronounce. For instance, the word "day" is pronounced by this narrator with a prolongated sustain as if he had a sustain pedal like on a piano. He doesn't say "day" he says "da-a-a-a-y-y" so it takes just as long to say as the word "peculiar". It's incredible. You can't tell where a sentence ends and the next one begins or where a paragraph ends or begins. And there is no way you can follow an idea, thought or concept. It's clear the narrator has exactly zero familiarity with the content. It's like someone who has never taken a single chemistry or biology class were to narrate a medical textbook but who can pronounce with exactitude each and every word but has no idea which words ought to be emphasized, said more quickly or more slowly. The text-to-speech rendition of this book is far superior. You can actually hear the content and think about the concepts instead of hearing "to" take as long to pronounce as "corresponding". When the narrator says the phrase "three portals" the word "three" is inflected exactly like "portals". He clearly does not understand neither word should be dramatically inflected. "Thrrrreeee Poorrrrttttalls" is meaningless and annoyingly distracting. Ugh!