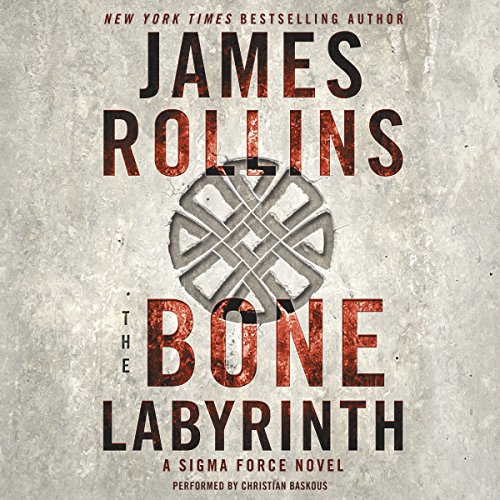 A war is coming, a battle that will stretch from the deepest trenches under the sea to the rocky craters of the moon, in New York Times best-selling author James Rollins' groundbreaking masterpiece of ingenuity and intrigue that spans 50,000 years in human history to mankind's next great leap - but will it mark a new chapter in our development or our extinction?

A series of strange events throws the world into turmoil. As a manned Chinese rocket explodes upon launch, three American astronauts, each separated by thousands of miles, are murdered. Then an archaeologist in Croatia uncovers a new cavern system that reveals elaborate primitive paintings by a tribe of Neanderthals. The artwork, painted in blood, illustrates an immense battle between the Neanderthals - joined by Homo sapiens - and frightening shadowy figures. Who is the ancient enemy depicted, and what does it mean?

The search for answers will take Commander Gray Pierce of Sigma Force 50,000 years back in time. As he and Sigma trace the evolution of human intelligence back to its true source, they will be plunged into a war for the future of humanity that stretches across the globe - and beyond.

From ancient tunnels in Ecuador that span the breadth of South America to a millennia-old necropolis holding the bones of our ancestors, from the lost archives tied to the sunken continent of Atlantis to the first moon landing, Sigma embarks on its most harrowing journey ever - and faces off against its greatest threat: an ancient evil resurrected by modern genetic science, strong enough to bring about the end of man's dominance on this planet. Only this time Sigma will falter - and the world we know will change forever.

Another good read from Rollins

I've always enjoyed Rollins' writing . The stories are adventurous and thought provoking. The Bone Labyrinth is no exception. As I always do with Sigma novels, I stopped often to research the science, I love how muck I learn about current science when reading Rollins.

The narrator tells the story wonderfully. The only reason I didn't give the performance a 5 is for the editing. This story switches POV often yet the editing didn't take any breaks when switching. This meant I was frequently lousy for a few moments when an event was happening in one POV and then, as if in a single break, the story would be somewhere else. Reading this in print there would have been a paragraph or section break that would have made it a little less confusing. I often had to rewind a minute to figure out where I was.

But don't let that put you off, it's definitely worth a read.

I haven't even finished listening, but felt the need to strongly recommend this book. The plot is exciting, evenly-paced and avoids the cheesy, schmarmy tropes that these sort of books often fall victim to. Rollins seems back on track with this one.

More importantly, the narrator is incredible. I'm picky. Sometimes when I hear a bad accent or a narrator poorly fleshing out a character's voice, it pulls me out of the story and detracts from the overall experience. Christian Baskous effortlessly switches from accent to accent -- Italian, French, Eastern European, British, subtle American regional dialects -- and gives each character their own rich flavor that I haven't come across in another audiobook yet.

10/10 would recommend taking a listen to see for yourself.

Someone needs an editor!

Clearly you would need to be into Rollins, Sigma Force and whole sheebang. Otherwise this one is overly long, overly messy and some spark was missing.

If you’ve listened to books by James Rollins before, how does this one compare?

Not in the top 10 list. Well researched perhaps,but almost too much in fact. The story is thick with information, and needs editing badly. Not his best IMHO.

Have you listened to any of Christian Baskous’s other performances before? How does this one compare?

I like this performer, but he seemed to lack focus and energy in this outing. Likely the fault of the material as much as anything, but still not the best outing.

Do you think The Bone Labyrinth needs a follow-up book? Why or why not?

OK I like the Sigma group, and I like Rollins, but this one did not do much for me. It just seemed to drag on. Maybe my issue, but I think it needed editing and more energy than I experienced. Not recommended, unfortunately.

No idea what this story was about

Maybe this was due to the narration, which had an odd cadence throughout, but I could not keep track of the story. There were too many plotlines, and really a silly premise. I usually will buy a Rollins book straight away (unless he pairs with Rebecca Cantrell when it becomes more romance than action), but maybe will think twice next one.

Ok, so I've been a Sigma Force series fan for a long time and this plot does not disappoint. However, Christian Baskous,the narrator of this story, really ruined this for me. The guy sounds like Brain from "The Pinky and the Brain" cartoon! :-(

I usually love books by James Rollins but I just could not get through this one. the narrator was awful and the story just wasn't very good.

Struggled to enjoy it

A disjointed, story line sprinkled with far fetched, contrived action scenes that detract from its credibility. Some OK character development made me finish, but I found myself wishing it would end long before it did.

Not a fan of the narrator either.

I have listened to each of the books in this series and have enjoyed them... This book is the first one I can remember that a LOT of stuff was left hanging out there.. Usually things are tied up well not so much in this one?? perhaps it was rushed to make the Christmas deadline, it was still a good book just left me a bit unsatisfied. will still try out the next one if there is one.

Man, I loved these books, but this was not good

I've defended Christian Baskous before, but this was horrible narration.

Then, the story was okay, a little strange, a little less like what DARPA would do, but, I was enjoying it. The ending was a killer. "Tying up the lose ends" might have worked had it not been so many years in the future. I kind of liked the scientist and the gorilla, at the end, but, did he kill off Kowalski (or did they break up), why was this 10 years after the book, why aren't there more stories about Maria and Kowalski between now and then? Is the next book going to be 10 years in the future too? Will all the characters be in their 40s and 50s?

I'm not sure I want to read any more of these, and I am not at all pleased with this ending.

What happened to the aliens?

Well written great adventure. But the end was a little waa-waa. I felt let down with the unanswered questions. But I'll still recommend it to others.