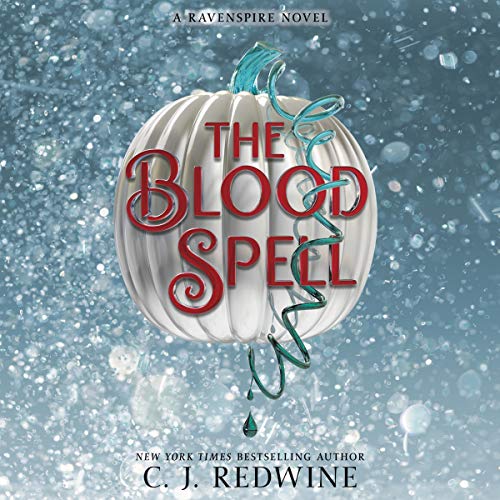 A dark and romantic epic-fantasy retelling of the Cinderella story, about a girl who must team up with the prince she despises to defeat an evil creature threatening their kingdom. The fourth stand-alone novel in the New York Times best-selling Ravenspire series by C. J. Redwine.

Blue de la Cour has her life planned: hide the magic in her blood and continue trying to turn metal into gold so she can help her city’s homeless. But when her father is murdered and a cruel but powerful woman claims custody of Blue and her property, one wrong move could expose her - and doom her once and for all. The only one who can help? The boy she’s loathed since childhood: Prince Kellan.

Kellan Renard, crown prince of Balavata, is walking a thin line between political success and devastating violence. Newly returned from boarding school, he must find a bride among the kingdom’s head families and announce his betrothal - but escalating violence among the families makes the search nearly impossible. He’s surprised to discover that the one person who makes him feel like he can breathe is Blue, the girl who once ruined all his best adventures.

When mysterious forces lead to disappearances throughout Balavata, Blue and Kellan must work together to find the truth. What they discover will lead them to the darkest reaches of the kingdom and to the most painful moments of their pasts.

When romance is forbidden and evil is rising, can Blue save those she loves, even if it costs her everything?

To much of anything is a bad thing...

this story was Cinderella mixed with Snow White, Blue Fairy, Rumpelstiltskin, and hansel and gretel the witch hunters version. It way a lot to weave together and something's suffered for it. for the first 40ish chapters Blue who is Cinderella, and the blue fairy and the girl who weav- I mean alchemize gold... is all about making gold from metals like iron. And then suddenly they story line that has been her whole purpose is dropped and never taken back up. the Blue fairy come in with blue being part fairy and named Blue. And also her need to help children. But what happened? shes queen now the family's are angry and she just abandons the experiment that was her identity? that could help save the royal family power and make the nobles stay in place. its dropped like an old tissue and never spoken of again. Diana the gaurdian/evil step mom, is Snow Whites step mother to a T mostly. it's good but things dont really fit well together. with all that going on.

Blue is an alchemist trying to make gold in order to help the poor and mistreated in the land of Balavata, and she must keep her experiments secret to avoid being executed for use of magic. Kellan is Balavata’s prince who must play the political game in order to keep his right for the throne, but he doesn’t want to play the political game. When Blue’s father is murdered, Blue’s property and her freedom are controlled by an “evil stepmother” who forces Blue to continue the golden experiments for quick coin. Now, the only person who can help Blue is Kellan—the boy she’s hated for most of her life.

Khristine Hvan’s performance is alright. She does well with a variety of character voices, however, I do not believe her voice matched with the ethnicity of the characters. Yes, the accents were done alright, but I was not completely convinced.

The writing style was expertly crafted and is reminiscent of the lilting tones of a fairy tale. The plot itself was average. I disliked that there were certain “clues” throughout the novel that the reader and the characters can decipher easily, and yet the characters take until the very end of the novel to piece the clues together. The main two character’s romance was the most interesting part of the novel, which I believe should not have been the focus. I was also hoping that the villain would be less two dimensional and given more depth. The Blood Spell is the fourth standalone installment of the Shadowspire series. I am not certain as to whether reading the previous three novels would have heightened the experience of reading The Blood Spell, but I would let teens know about the series itself if they are interested.

Yet another fantastic installment in the Ravenspire series. Once again CJ Redwine weaves a mesmerizing retelling of a classic fairy tale, this time with an alchemic twist.

CJ Redwine is the queen of fairy tale retellings!

I love the Ravenspire series! CJ's storytelling and characters are so engaging, thoughtful, and fun.