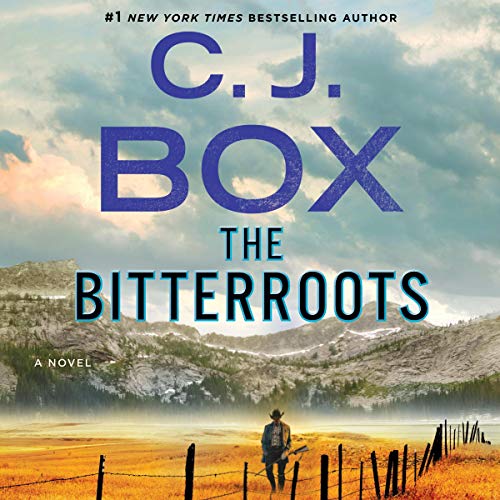 "What happens when you combine an acclaimed a C.J. Box novel with a terrific narration? A stellar audiobook like this one, narrated by Christina Delaine." (AudioFile Magazine)

Former police officer Cassie Dewell is trying to start over with her own private investigation firm. Guilty about not seeing her son and exhausted by the nights on stakeout, Cassie is nonetheless managing...until an old friend calls in a favor: She wants Cassie to help exonerate a man accused of assaulting a young girl from an influential family.

Against her own better judgment, Cassie agrees. But out in the Big Sky Country of Montana, twisted family loyalty runs as deep as the ties to the land, and there's always something more to the story. As Cassie attempts to uncover the truth, she must fight against the ghosts of her own past that threaten to pull her back under.

"What happens when you combine an acclaimed a C.J. Box novel with a terrific narration? A stellar audiobook like this one, narrated by Christina Delaine." (AudioFile)

Thriller without really any surprise. Montana landscape and some characters are interesting but you guess most of the thing in advance.

I don’t know if the book is good or not because I couldn’t past the first 10 minutes of the dumbest sounding people I’ve ever heard. I could not listen to it anymore. I understand the narrator was trying to make them sound uneducated but it was overdone. Wish I could get my credit back.

This series consists of five books ranging in length from nine to eleven hours of listening. Although not required to enjoy the mysteries, it's strongly suggested that you read them in order - sequential events will make more sense.

Plot. Back of Beyond features an alcoholic cop. The lead character, Cody, struggles through a boozy haze to rescue some kidnapped kids. His story continues through the first 1/3 of The Highway. Following through the remaining stories, Badlands, Paradise Valley, and Bitterroots, his partner, Cassie is featured as the lead character. Having a take-no-prisoners attitude, Cassie works her way through grizzly murders including those of a crazed truck driver's abuse of 'lot lizards', the truck stop prostitutes, to satisfying conclusions.

Liked. No explicit sex, no language inappropriate to the character or scene, nothing gratuitous. Good mysteries, albeit a bit grizzly at times. Narration is fine - there are three. No issues.

Not so hot. There are some eye-rolling instances of coincidence that will have you mutter, 'That's a stretch.', especially in Bitterroots.

Good reads, a series to enjoy! Recommended for the murder mystery lover.

Great story but worst narration ever. I almost had to quit listening to it the narration drove me nuts

Not up to Box’s earlier books. Also the narrator was heavy and irritating. There was little surprising . I can not recommend this book.

This is my first book by C. J. Box. It was not until I started reading the book that I realized it was book five of a series.

The book is well written. The plot twists around. The characters are interesting. The protagonist is Cassie Dewell. She is a former Sheriff’s investigator. She has opened up a private practice as a private investigator. She is hired by a friend to exonerate a man of a crime of rape. The story takes place in the Bitterroot Mountains of Montana. The pace is fast. Box provided great descriptions of the countryside. The story kept my attention throughout the book. I am looking forward to reading more books in this series.

The book is nine hours and forty-nine minutes. Christina Delaine does a good job narrating the book. Delaine is a stage actor and voice-over artist. Delaine has won multiple Earphone Awards and is an Audie Award nominee.

The story was fast paced with many twist and turns. The main character annoyed a few times.

The narrator is terrible. I couldnt get thru the 1st chapter. she put me to sleep.

when the narrator changed accent, the increase in volume was annoying and distracting to listen to.

Got the book yesterday & finished it this morning. Typical from Mr Box for me ... when I begin one of his books I just can’t put it down. I’m a big Joe Pickett fan & I also like many of his stand alone novels ... and Cassie is also a fav. Thank You Mr Box

C. J. Box brings Cassie back She is a private investigator, hired by defense attorney in a child molestation case. Her son Ben and her mother are feuding. Ben is having problems growing up. Cassie goes out of town on the case and all "hell" breaks loose. Lots of characters good, bad, and questionable ones. Plenty of twists and turns that keep the listener on edge until the end. I can't wait to see what cases she will have next.

The narration was well done. The characters were well portrayed. Christina Delaine brought the book to life.