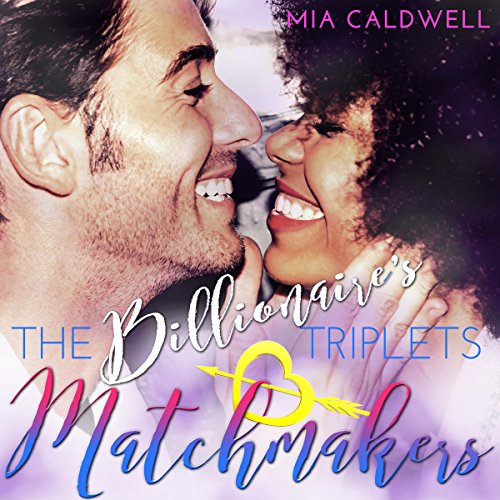 The Billionaire Triplets, eight-month-old baby brothers, Hunter, Ryland & Marco, are thrilled that their Mamma and Papa are finally getting married. On the eve of the big fat Spanish wedding in Barcelona, Spain, they decide to become matchmakers for their beloved nanny, and their Mamma's sister, Auntie Joan, when Hunter witnessed her face light up after a chance encounter with a handsome man in a café.

Turns out, Marco knows who the handsome young man is. It's Antonio Ferraro, a notorious playboy and star striker for Italy's soccer team, AC Milan. Also, Antonio is connected to their father, Julio Torres, the billionaire who's about to marry their mother. It's a perfect match - as far as the triplets are concerned, but their plans to play Cupid are turned upside down when they learn that Auntie Joan and the soccer star have a troubling history that's threatening to keep them apart.

To add insult to injury, Antonio has been a very bad boy, and now he's in serious deep doo-doo with some scary and dangerous men. Antonio has a gambling problem? What does that even mean?

The triplets are too young to know when it's time to quit, so they decide to keep trying. They can tell that Antonio Ferraro really cares about their Auntie Joan, and they've seen the way she looks at him. It's the same look that their Mamma and Papa have just before they get all kissy, (Yuck!).

They want their Auntie Joan to have the same happiness that their parents have, and they recognize true love when they see it - even if the silly adults are too stubborn to see it themselves.

Each audiobook can be listened to as a standalone novel. This novel contains humor, telepathically communicating babies, a little danger and violence for the adults, along with some seriously steamy intimate moments, (Our three baby's hide their heads and cover their eyes on that bit of news). This book also touches on recovery and addiction, including spirituality, the power of prayer, 12-step programs, and redemption. Enjoy!

I liked the book, but the things the addicts did and went through was kind of unrealistic and a bit too much. It had great sexual storylines and if the storyline continues I hope the storyline is more realistic.

The blurb picked my curiosity, but after listening to the story, I am not sure the title really fits the story. Yes there are triplets, they are cute and interesting how they communicate telepathically but not sure if they are matchmakers.
Otherwise the story was ok, a sweet romance with a little bit of suspense thrown in and some heated scenes. Joan's Mother and sister are a piece of work, no wonder she ended up an addict. Felt sorry for Antonio after finding out his story, he was way to forgiving towards his real Father. But there is a HEA despite their journey is quite rocky.

I enjoyed Mr. Kamish's voice, warm and melodious, I will be looking for other of his audios.

I was given this free review copy audiobook at my request and this review is voluntary.

The Great Narration of a Lightweight Romance

Mia Caldwell’s Billionaire’s Triplets Matchmakers has an interesting premise and action-packed storyline. As a romance, it fell flat for me, but as a story of two addicts confronting their addiction, it was spot on.

The Good:
Ms. Caldwell’s characters are fully developed. Even though this is the second book in the series, each character—both primary and secondary—is well presented. I really enjoyed Julio and Lissa/Joan’s mothers.

Ms. Caldwell deftly portrayed the struggles of various addictions as well as the impact of addiction on one’s career, relationships, and reputations.

The Bad:
Antonio and Joan’s love relationship is hard to believe. Joan has no faith in Antonio, and neither of them have faith in themselves. The use of sexual attraction as a substitute for love is not unusual, but I do find it unacceptable. The timing of their intimate moments was sometimes questionable, and I found the clinical descriptions to be far from sexy.

The story is wrapped up a bit conveniently and to some extent outlandishly. Royal connections, political threats, along with the bookies and mobsters were a bit much.

The Ugly:
Telepathically conversing babies just doesn’t work for me. I was put off by the unnecessary addition of this attribute. The triplets are given too mature a voice, as well as too much reasoning ability for infants.

The Shining Star:
Mark Kamish’s narration of the audiobook brought this story to life. I enjoyed his depiction of all the characters.

first time for this author and this narrator. I wanted to love this book and audio but I just did not. I think a lot had to do with the narration. Cute story, ill try the author again.

Would you be willing to try another book from Mia Caldwell? Why or why not?

yes I would try another

What aspect of Mark Kamish’s performance would you have changed?

I dont know, I just perfer dual narrators. His voice kind of annoyed me when doing his female voice

Do you think The Billionaire's Triplets Matchmakers needs a follow-up book? Why or why not?

if there was one I wouldn't but it

I was given a free review copy of this audiobook at my request and have voluntarily left this review.

I do not understand how anybody can feel like this is a good love story. Both Joan and Antonio are both toxic to one another and I do not understand how this is something that can be characterized as love and romance. The only saving grace to this book is the fact that the triplets or so cute and or just amazing. I also enjoyed Mark Kamish's narration. I really really really dislike this book however the narrator was amazing. I will now have Britney Spears tell you how I feel about this pseudo &quot;love story.&quot;

I was given this book in return for honest unbiased opinion. I honestly like the book a lot. The only reason why it is a 4 star for me is because the talking baby thing just didn't do it for me but other than that, yes I liked the book a lot. I enjoyed the narration and the story.

Good story with a few twists and some steamy steamy sex. There was not a lot of steamy moments, but when they come up, they were hot.

Joan, the main character, a former super model and a recovering alcoholic in a 12 Step program.

Joan is a nanny to her sisters triplets and trying to get her life back together after a stint in recovery.

When she runs into Marco again, her past love, a famous Soccer player, who, unknown to her, has a gambling problem..

When they hook up again, of course, there is mis-communication and, mis-understandings.

Once they work all out, things are good..

Good story line but I didn't enjoy the narrator.
"I was given this free review copy audiobook at my request and have voluntarily left this review."

I really enjoyed this second chance romance. Funny and sweet, this book also had a lot of depth and characters you can't help but root for. The narration was fantastic and really brought the story to life. This is the first book I have listened to by Mia Caldwell and I can't wait for more - I really enjoyed the humor.